Adding a Murphy Bed to the Secret Office

We made a secret bed, or murphy bed, outside the secret office! See how you can add a bed to any room without sacrificing floor space.

1. Use the Plans From Rockler

After we built Josh’s Secret Office Through a Wardrobe, they intended to put a spare bed in the space outside of it. He mentioned that the room needed to have open floor space for his kids to play. A regular bed would take up that space, and force him to walk around it to get to the office. We were contacted by Rockler about using their murphy bed kit. A murphy bed is a “secret bed” that folds away into a cabinet. This solution keeps the floor space open while providing a place comfortable place for guests to sleep.

The kit comes with a set of plans for a basic wooden cabinet to hide the bed, but Josh used Fusion 360 to add some additional pieces. He used the 3d model of the secret room to ensure that the new murphy bed and cabinetry would fit in the space. We then cut down several pieces of plywood to make up the individual components. The murhpy bed box is made up of several plywood braces sandwiched between two layers of plywood. That platform is attached to two uprights using the hardware kit. Josh made extra sure to follow the listed dimensions so that the hardware would fit the first time. We moved the bed unit into the room while we made the side shelving units. 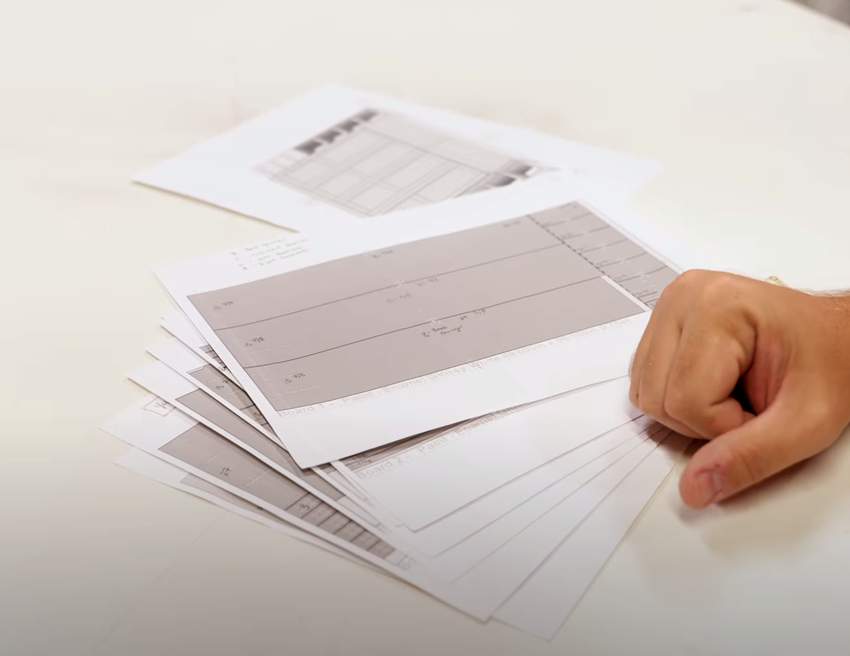 The two shelving units that will flank the murphy bed are, while quite large, pretty simple. There are two vertical side pieces, pocket holed shelves spaced 12 inches apart, and space at the bottom for three drawers. After modeling the drawers and drawer boxes in Fusion 360, it was really easy to digitally measure the space and plot those markings on the unit. Josh chose European, bottom-mount drawer slides which don’t pull out as far as the slide we normally use, but they were less expensive.

The drawer boxes were very simple. We used the same 3/4″ material as the rest of the unit glued and nailed together. The faces were also made from the same plywood, but I added edge banding all around the edges. It was one of many elements that required edge banding for this project. The process wasn’t that bad because many of the exposed edges were on large pieces, so it went pretty fast. Once the units were completed, Josh countersunk some holes on the mating faces with the murphy bed. The bed box had some hardware that stuck out the side. With the countersunk holes in the shelves, the two pieces can sit flush and be screwed together. 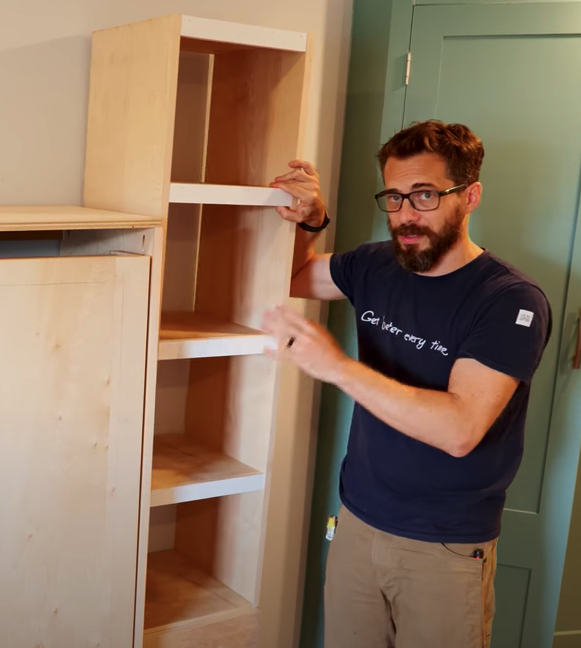 Between the two upright shelving towers, on top of the murphy bed box Josh designed two cabinets. The simples dorrs will hinge upward and stay in place with the help of some gas struts. This space is meant for larger items like extra bedding or suitcase storage for the guests. Three plywood dividers were attached to the upper cap and connected to the top of the murhpy bed box. The doors area a super simple, faux-shaker style that Josh has used before. They are made from 1″x2″ pre-primed lumber and a sheet of 1/2″ MDF. The MDF is inset 1/4″ from the front and give it depth. We pocket holed each piece together to made some cabinet doors. We used some Kreg products to attached the hinges and the pull hardware. 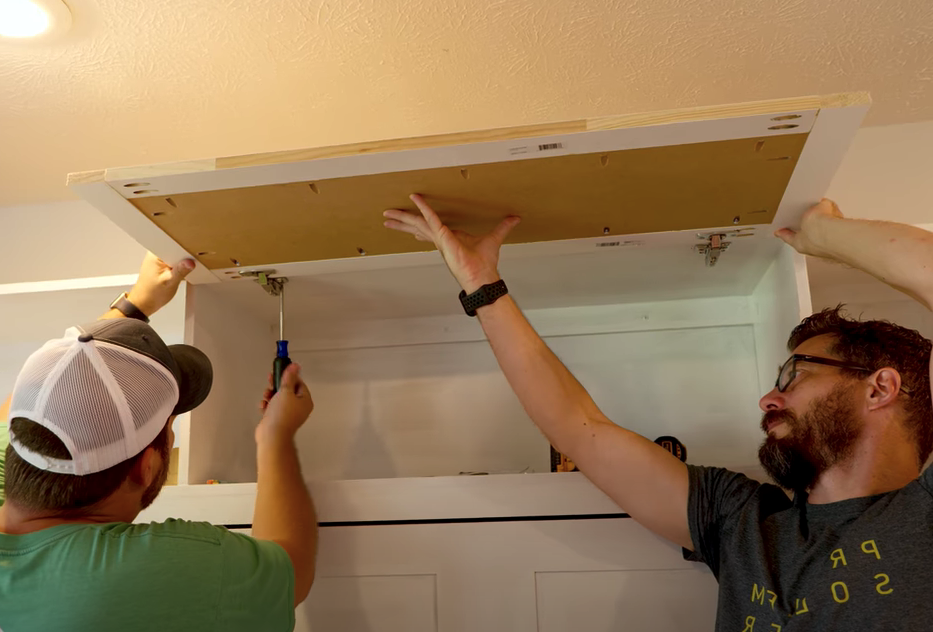 At this point, the entire unit was ready for paint. Josh’s wife loves to paint, so she adde two coats of a fancy white paint. Josh bought a full-size mattress and placed it on the hinged platform. The murphy bed kit from Rockler was very easy to adjust the counter balancing action. We also added a charging port for several USB devices in a feature drawer. We had to ensure that the cables were run through the separate units before they were lag-bolted to the studs. After some handles, pulls, paintings, and knick-knacks, the project was finished. 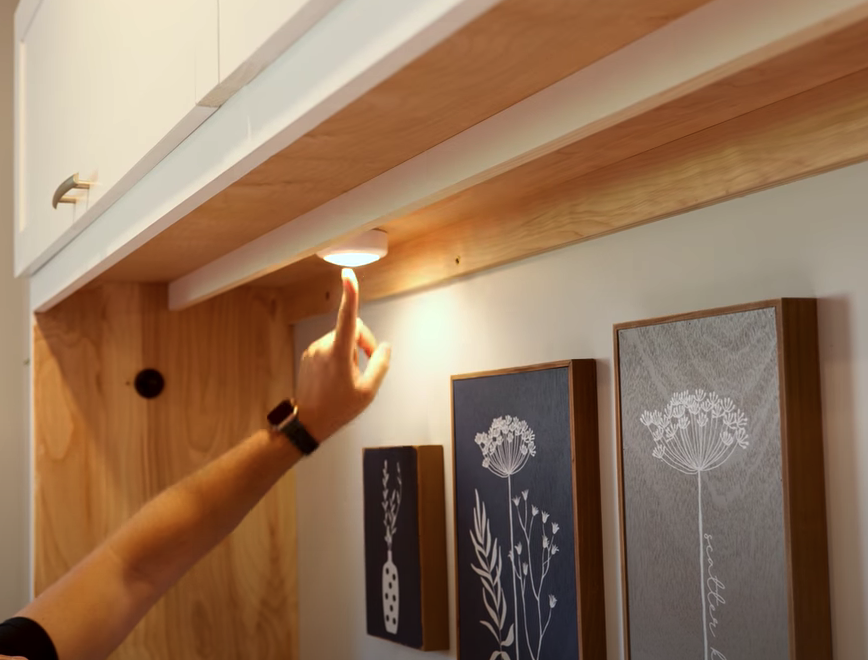 Perfect Solution To A Common Problem

I’m really happy with how this project turned out. Josh and his wife are even happier because the murphy bed kit from Rockler was the perfect fit for that room. It’s even on theme for the secret nature of the office! I’m really happy that were were able to recreate the elements from Rockler’s plans in Fusion 360 so we could add to the overall build. Josh was able to adjust sizing, number os shelves, drawer spacing, and placement in the digital room really easily. We were able to get his wife’s and the sponsor’s approval for the project without building a single thing. If you want to find out how easy it is to 3d model your projects before you make them, head over to our online Fusion 360 course. 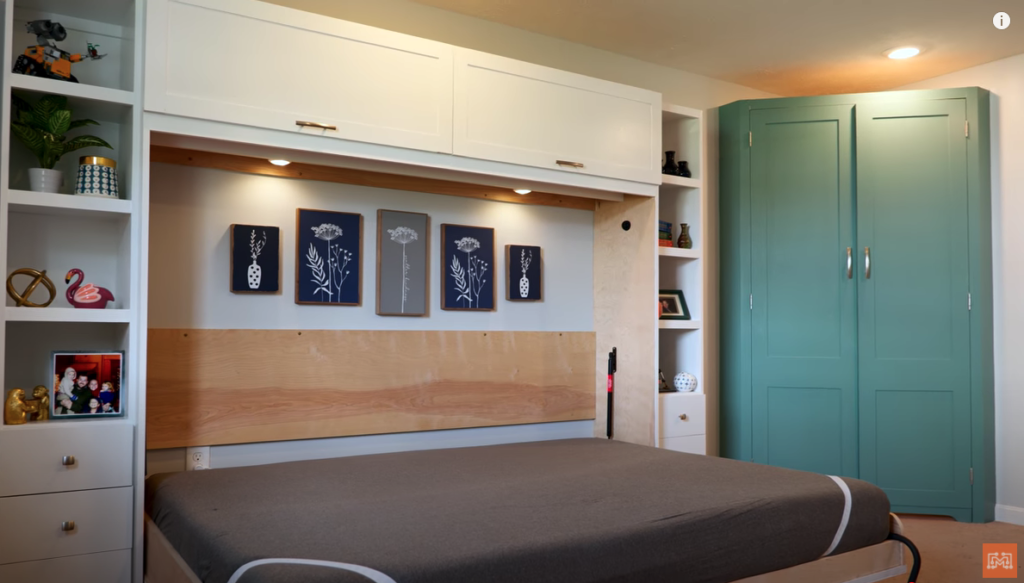