How to Make A Secret Room (Through a Wardrobe)

In a follow-up to one of my favorite projects, Making a Secret Door, we are making an entire secret room in Josh’s house that you access through the back of a wardrobe!

This project was meant to separate a long room in Josh’s finished basement. The intent was to make a non-load bearing wall that cut the long room into a bedroom in the front and a secret office space in the back. To make it fun, Josh designed a corner wardrobe that you could walk through. To keep out little kids and to add to the secret allure, the doorway would lock and unlock with a hidden switch.

Building the wall is pretty straightforward. We used 2×4 studs cut to match the height of the room and span from one side to the other. I also had to leave enough room on one end for the doorway. The wall studs were nailed in place every 16 inches and secured to the floor using Tapcon anchors. We researched the risks of placing a new wall over the carpet, and Josh decided that it was a better option than removing the carpet in that area and adding new tack strips. Because we intended on running new lighting into the office, Josh ran wiring through an existing soffit and down through the wall on a new circuit. This way, we could rough in a light switch and two outlets in the new wall. We added 3 new low-profile recessed lights into the room which made the space much more usable when blocked off from the rest of the room.

Now that the wall was up, we had to add the door that would also act as the back panel in the wardrobe. We purchased a blank,  hollow-core door from Lowe’s and a pack of hinges. I didn’t get a pre-hung door because those doors are centered within the attached door jams. Our door needs to sit flush up against the doorway so there wouldn’t be a weird recessed back panel in the wardrobe.

Josh added some mortices to the door’s edge to accept the 3 hinges. I had to do the same thing to the door jam spacer that we created. I screwed this spacer directly to the wall stud and hung the door in place. 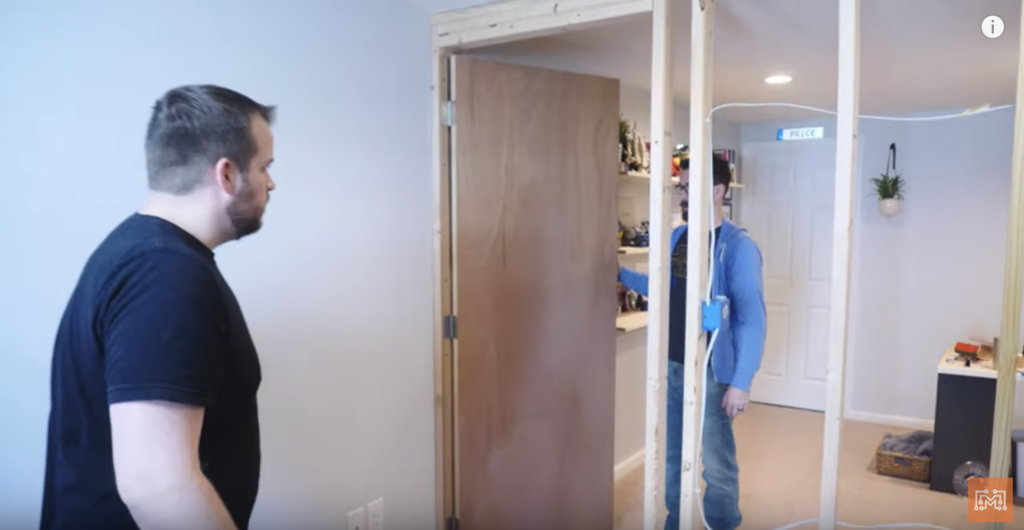 To hide the entire opening, we designed a corner wardrobe with two doors and some hanging hooks on the inside. Josh wanted to make sure that the wardrobe was functional and inconspicuous, not giving anyone a reason to know that there was something going on behind the piece. He drafted up a cut list using Fusion 360 and we cut the items out in Josh’s shop.

Most of the wardrobe would be framing elements to support the two front doors. Because it was situated in the corner, one back panel would be the previously existing side wall and the other would be our newly installed door. To hide the seams, we used 1×4 boards to make “trim” on the inside and 1x6s to jut out from the wall and support the front doors. Josh used 1/4″ plywood strips to add decorative trim to the single panel doors to add some character. The door panels were cut in one piece and hinged to the frame. There is no bottom trim on the doors so you don’t have to step over anything to enter the secret room. 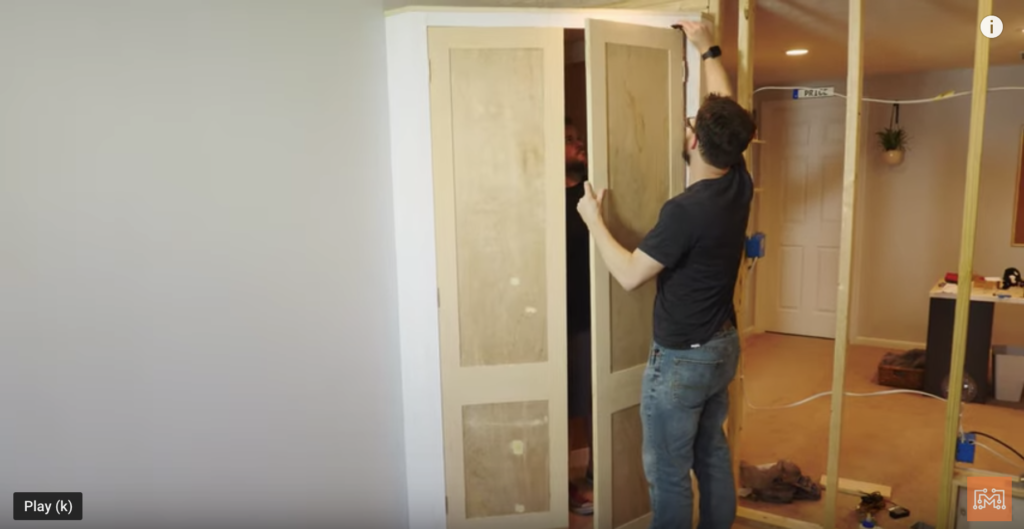 4. Wire Up the Secret Lock

In order for the secret door to stay shut when not in use, we decided to use an electromagnet made for security doors. Josh modeled and printed a door handle for the inside of the office that held the metal plate to the door. We mounted the actual magnet to the door jam. When the door is closed, the handle holding the metal plate would contact the magnet. To control the whole setup, I used an ESP8266 wifi enabled micro-controller and two microswitches.

One microswitch would be on the outside of the room in a secret mechanism and the other inside the room by the light switch. The two switch really do the same function, the turn the system off (magnet is not powered) and back on (magnet is engaged). If the power goes out, the system will default to power off so no one can get locked in the secret room. 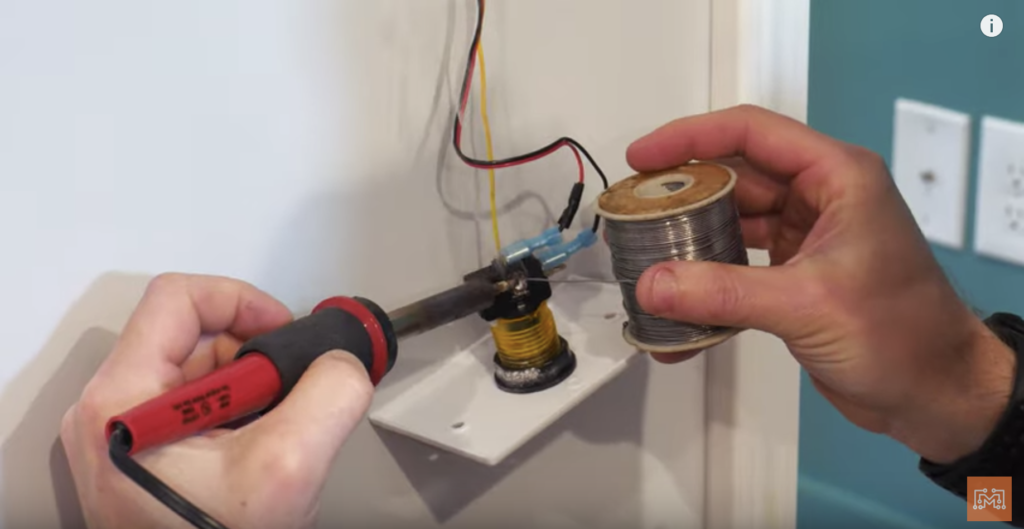 We rigged up a simple arcade button inside a single gang box for inside the office, and for the outside, Josh modeled up a really nice looking planter that will sit on a floating shelf mounted to the outside wall. In the base of this planter will be another microswitch that will be activated when the planter is turned. So from the outside there will be a simple floating shelf with books and plants, but one of them will secretly unlock the door. 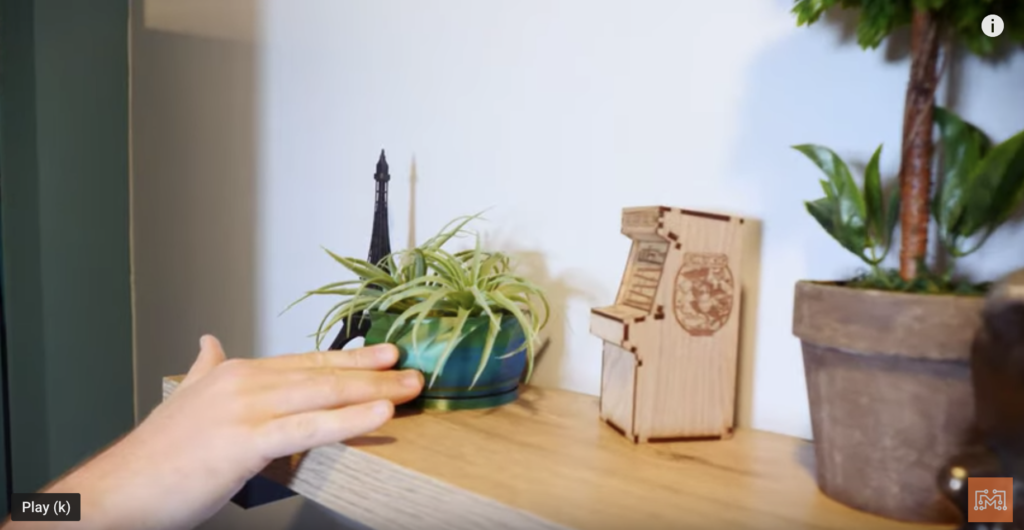 Now that the wall is framed, the door is hung, the electrical is roughed in, and the lock is installed, it is time to cover it all up with drywall. We did leave room for an access panel in the office for the microcontroller if we ever had to adjust the lock’s code for any reason. Josh decided on 5/8″ thick drywall to help dampen sound while inside the office. He has 3d printers running and he also records podcasts in there, so adding an extra layer of drywall should help control noise. We cut, taped, and mudded both sides of the walls. 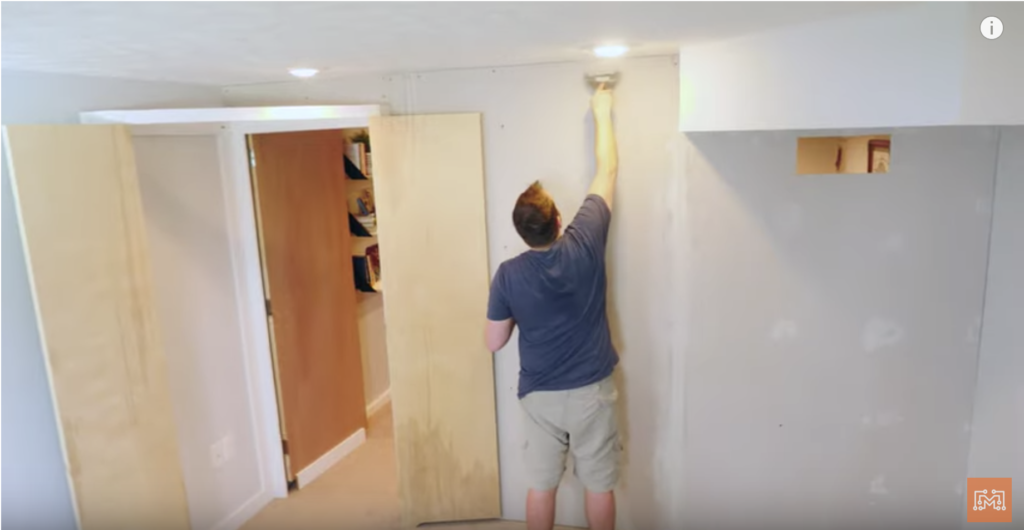 During this project we have been using a new tool from Dremel, the Multi-Max 50, a new oscillating tool that has a ton of awesome quick-change attachments. We used it to cut baseboards, cut outs for electrical boxes, cutting long pieces of drywall, adding the holes for the recessed lights, and notching out framework for the magnet. It is super powerful and is really handy to have around. Dremel and Lowe’s are also sponsoring this project, so thanks to them for making the Multi-Max 50 and for making this secret room happen.

Josh’s wife painted the walls to match the existing rooms and painted the wardrobe a really nice shade of blue. After adding some cosmetic baseboards and door trim, and hanging the floating shelf, the room was finished! 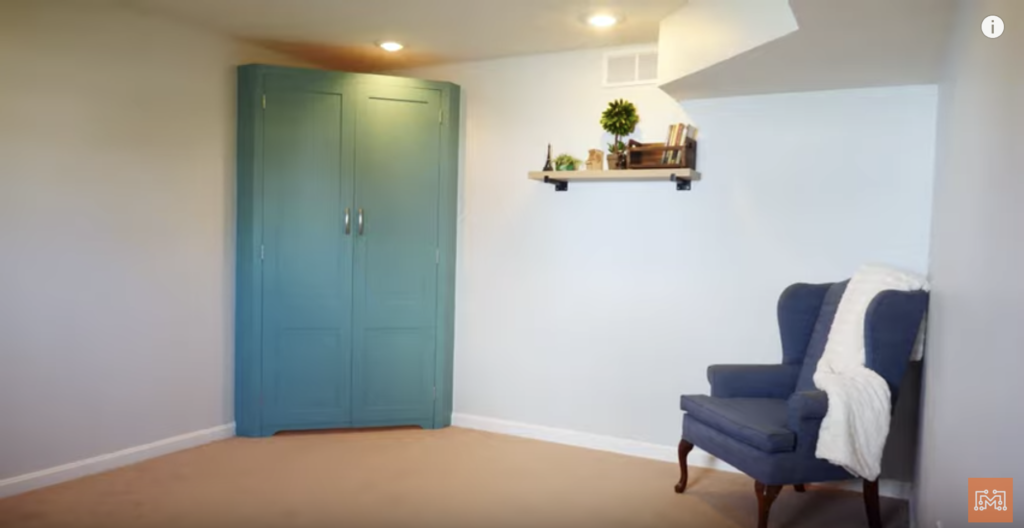 This Secret Room is So Cool!

I was really excited to revisit the secret door project and adding it to Josh’s house was extra special. Adding the wall was quick and easy, but adding those secret elements made it really fun. The wardrobe was really simple to make and didn’t require a lot of materials. But my favorite part is of course the secret locking door. You honestly can’t tell that there’s a door in the wardrobe, it blends in so nicely. The magnet is incredible and works so well!

We hoped you liked this project and hoped it inspired you to do something similar in your own home. It would be cool as a secret office, walk-in closet, or media room. I’d also like to thank Lowes & Dremel again for sponsoring this video. If you are interested in learning more about the Dremel multi-Max 50, visit https://low.es/2V8SBUt. 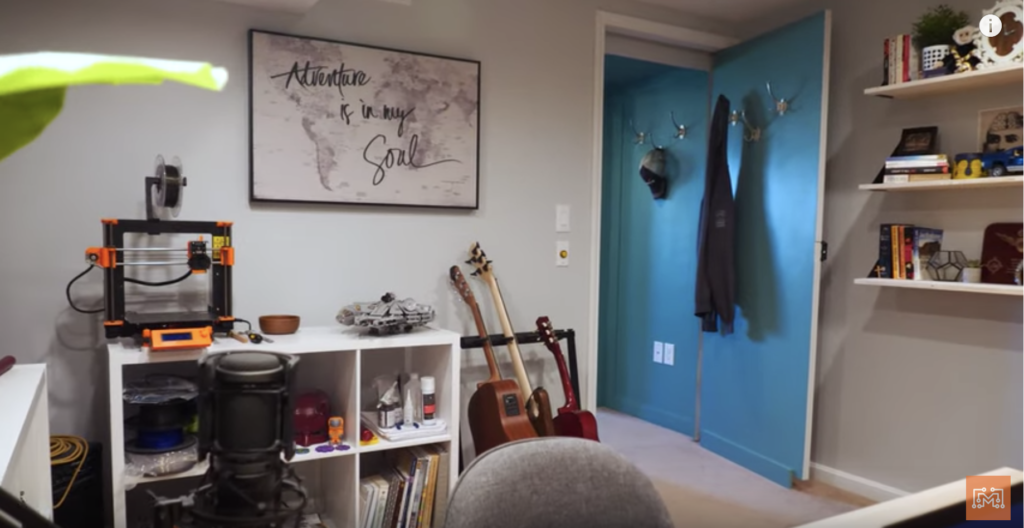