Can I Make Toast Art?

I want my breakfast toast to be art inspired – what could go wrong?

I’ve been wanting to figure out how to toast art on a piece of bread for a while now. It didn’t seem like it would be too difficult to figure out but my eyes were bigger than my stomach.

When it comes to switching out different art to toast, I didn’t think a traditional stand up bread toaster was the way to go. Instead, I used a toaster oven because it seemed like a much safer way to try this out. I used my powder coating oven instead of a kitchen toaster oven; since I wasn’t going to be eating any of the toast, it wouldn’t cause any food safety issues. 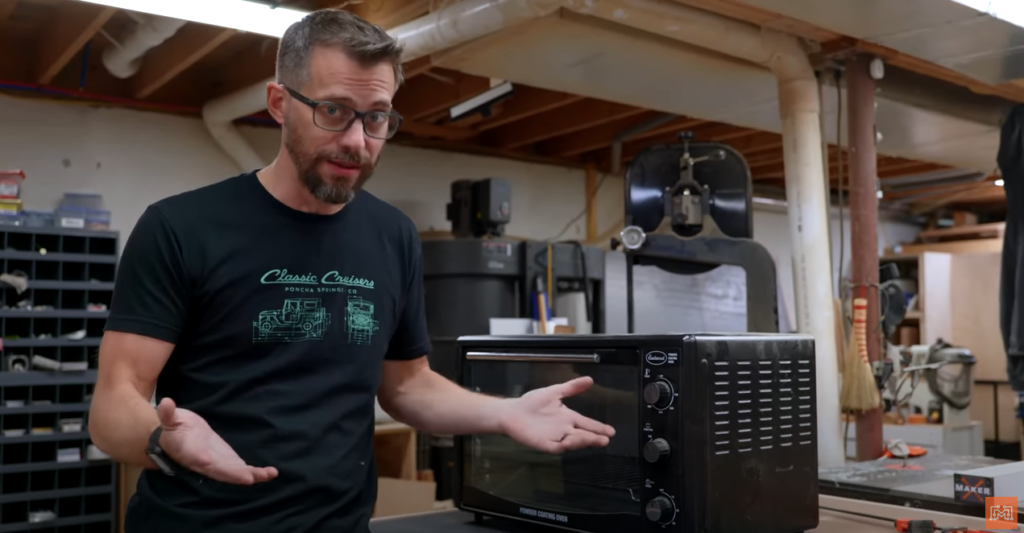 After some research I saw people try using aluminum foil to toast designs. I started by cutting out a quick diamond shape and set it like a mask over the bread. Trying it this way would just toast the missing piece rather than the whole piece of bread. While that was in the oven, I attempted using a blow torch on a different design to see how it would work. The blow torch used a lot more heat faster and it heated the aluminum foil underneath and went outside the art template. Blow Torch wasn’t really the way to go.

The first aluminum foil in the toaster oven attempt was unsuccessful. But we noticed that the bottom portion of the bread toasted pretty well. With that, we put the art design on the underside to test. That time it definitely worked. 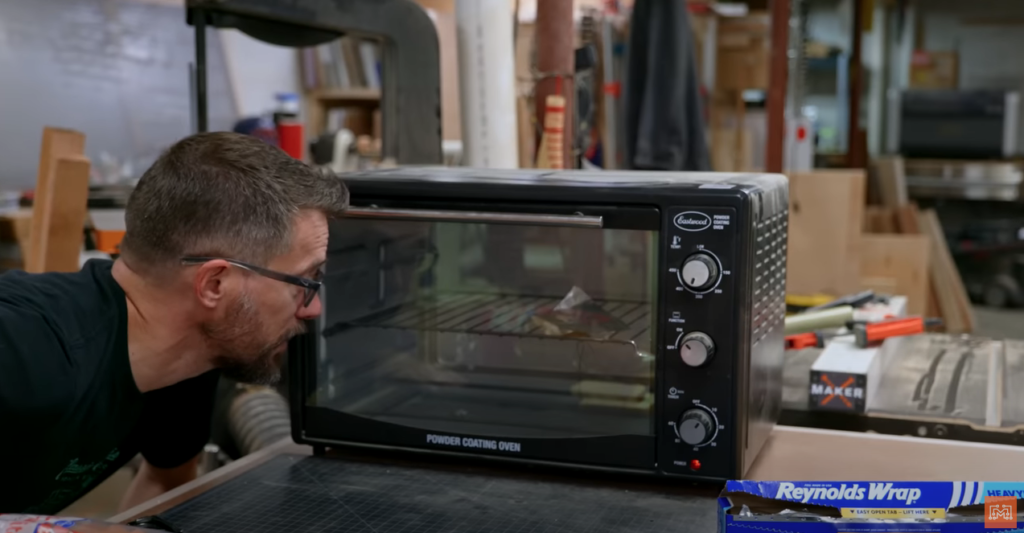 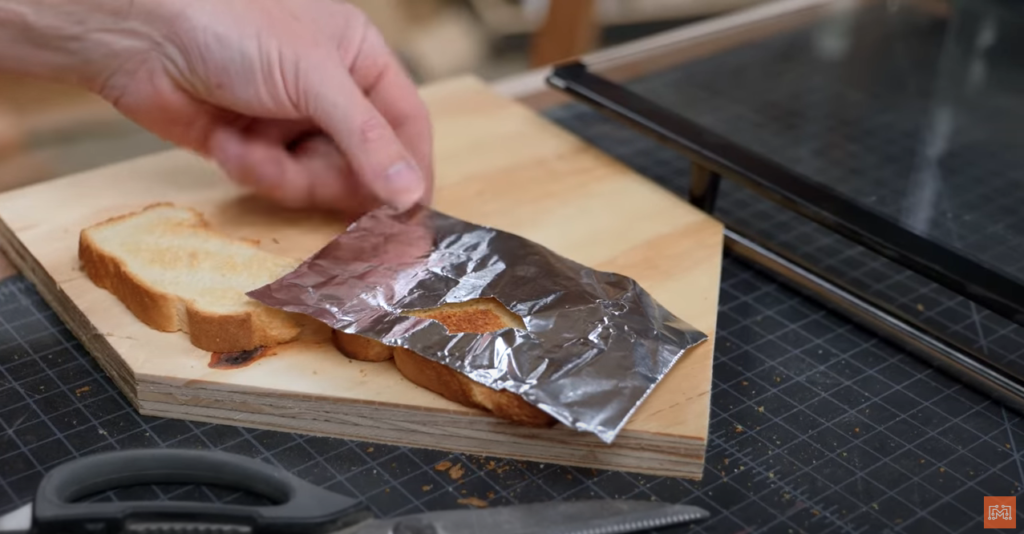 Over the holidays, I saw several different makers using a food safe laser to burn art designs on different food dishes. Even though I’m wanting to be able to do this with a toaster oven, I just want to see how perfect the laser can toast art on bread. It’s definitely not safe to eat but it looked perfect! 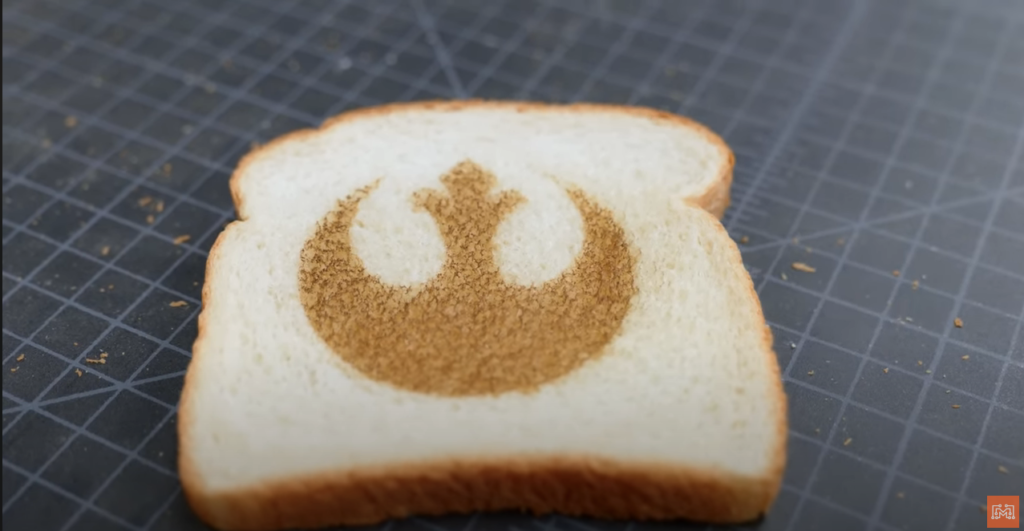 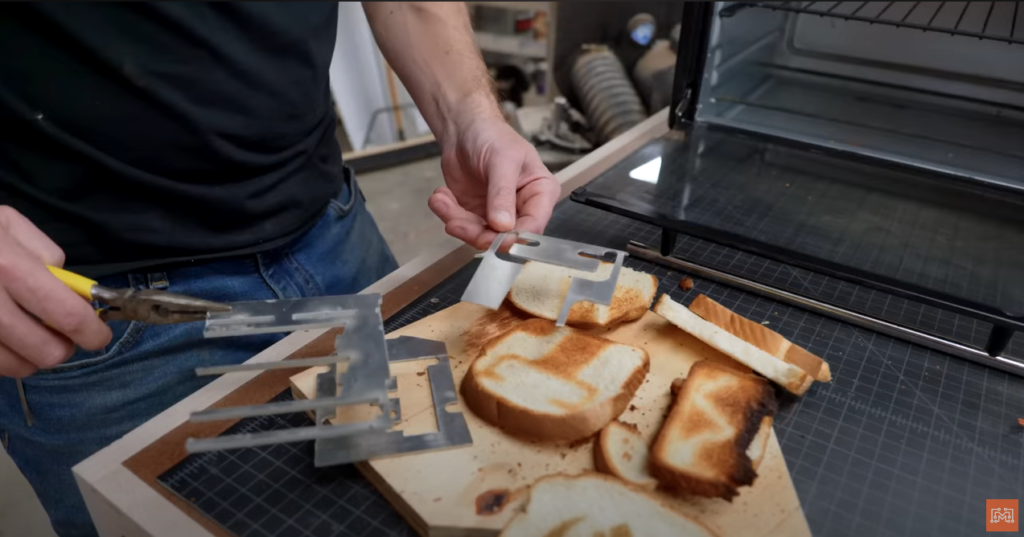 6. Making Our Own Toast Templates

With that in mind, we took the thinner piece of aluminum and Josh cut out some art designs on the CNC for us to toast. After 3 broken bits, we decided to take a turn and use the Wazer to cut the art designs. Much better. I also used the service called Send Cut Send and they cut a few templates for me to toast as well.

We tested out the difference between the Water cut templates and the Send Cut Send Templates and both turned out similar – but I realized that the line art needs to be wider than what you really want since the toaster wasn’t able to burn the finer details of the design.

The next time around, I added weights to the template to see if that made a difference in the clarity of the toast. I wouldn’t suggest to do this at home at all. With the added weight, the bread stuck to the side of the template. Fail. 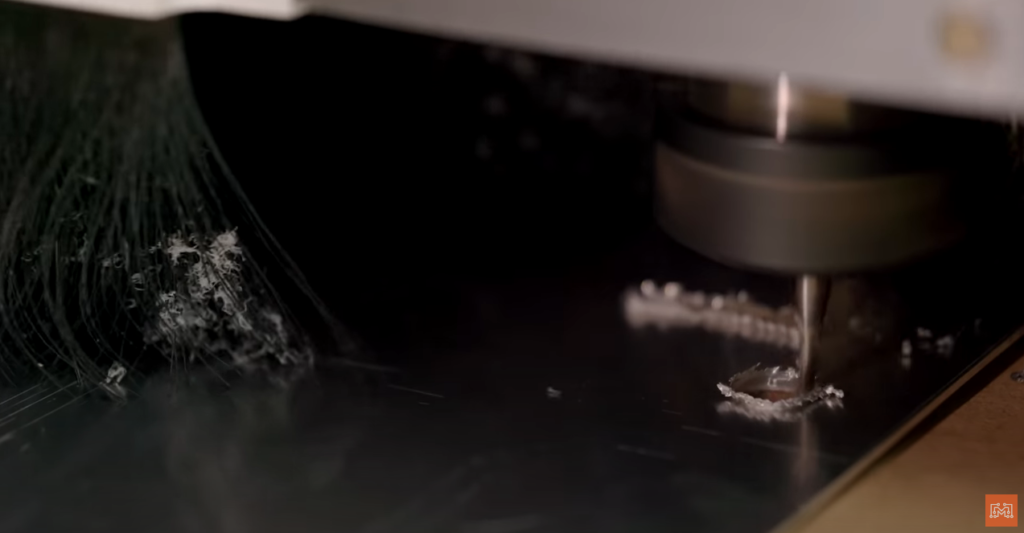 I wanted to give this another chance with a larger and less complex design that would hopefully work. This time around, I also added butter to see if it helped in the browning of the bread. *note – use spreadable butter* I used both the positive and the negative aluminum cut out for the toast test. The art design wasn’t detailed ENOUGH this time – you couldn’t see the details in the lightening bolt at all. The butter made the bread sink down a bit and didn’t make any difference at all. 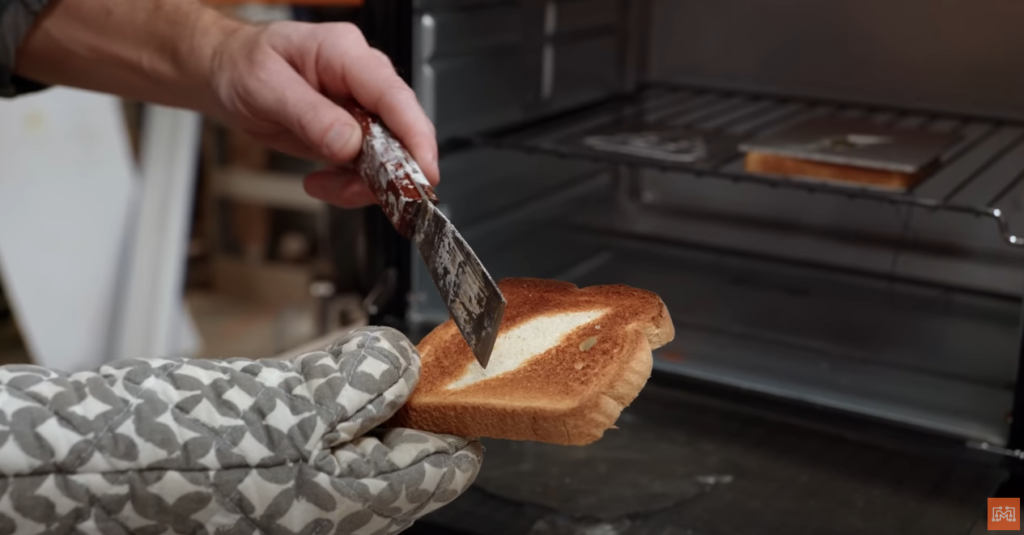 This project would absolutely be considered a failure in my book. But it was fun to figure it out. Fun toast designs weren’t worth it but the laser burned a perfect design, except that we can’t eat it. This was a fun experiment, but just didn’t work out. Let em hear from you – what would have worked?