I was going to start this post with something like “we all know how much I love built ins”, but then I realized that I’ve never posted anything about the gigantic built in shelving unit that I built in our living room a couple of years ago. So, I guess you probably wouldn’t really know how much I love them, but take my word for it.. okay?

Anyway, when we moved into our house 5 1/2 years ago, there was a downstairs “den” that just seemed like an afterthought. It was the only room in the house with wood paneling (painted YELLOW.. like REALLY YELLOW), and the only room with crown molding (a symptom of the paneling)

The room has wall of brick and a fireplace, but the bricks are not structural, the wall was built INSIDE the room.  You can’t tell that, of course, unless you climbing up into the fake fireplace (which I did).  There were originally some out of date and rather poorly built shelving units flanking the fireplace.  There was also a 2-panel, 8 ft wide sliding glass door that led to our backyard.  The door was heavy and didn’t slide well, and honestly, with 3 kids, a target.

Overall the room was functional, but not quite ugly enough to make it a priority.  Then we found out that baby #4 was on it’s way, and several of the “someday” projects became “before we have absolutely NO FREE TIME” projects.

The first steps were a new door and window, since we’ve been slowly replacing all of the windows in the house over the past couple of years. 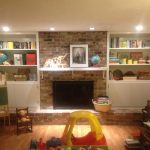 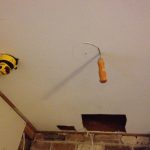 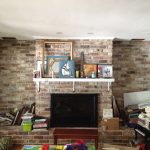 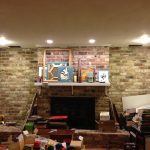 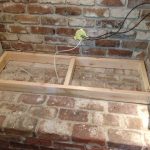 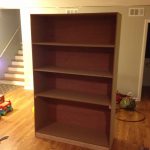 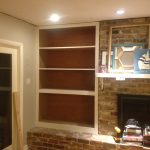 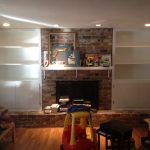 Some quick demo got rid of the paneling, crown, and shelves.  Simple electrical work was done, adding 2 switches to the wall and wiring them to 2 sets of overhead can lights, then all new drywall.

The can lights were a bit of a challenge because the ceiling joists ran parallel with the fireplace and I had to open up the ceiling, drill through the joist to run the wire.  It worked fine for where I wanted the lights, but adding more lights into the room would have been a mess.  I probably would have just torn out the ceiling all together at that point.

Then to the built-ins.  I followed the same pattern and materials that I’d used in the first unit (I’ll try to post about it as well). MDF as the structure, 1/2″ for the frame, 3/4″ for the shelves. With a pine 1x facing  and a luan backing panel.  The units sat on top of a simple 2×4 box to lift them up and give them a visual base.

The space I had to fill was annoyingly wide, 52″.  This made it so that cutting the shelves and back panels required me to cut a 4×8′ sheet long ways, creating LOTS of waste.  I have a big stack of MDF to use for future projects now, which could be worse, I guess.

There was some trial and error building these.  I built the frames, added shelves, etc making them as wide as I could while still fitting in the bricked area. But as I found out, the bricks were very irregular. It didn’t occur to me until later, that since I was adding the 1x facing, I could make the frames a tad smaller, slide them in place, then use the facing to make it snug.

So, lots of priming and painting later, the shelves are now in use, with the tops for display, and the bottom cabinets for toy storage.