How to Make a Modern Canopy Bed

By Josh PriceJuly 23, 2020Projects
No Comments

I made my daughter a clean, modern canopy bed using almost entirely plywood! We’ve got plans available so you can make one too!

First, I designed the bbed in Fusion 360 because I needed to get approval from the stakeholders: my wife and daughter. Using 3d modeling to plan the project is extremely handy because I can easily make changes upon request. This project was a perfect example, because my wife wanted the bed to look modern and clean instead of bulky and large if I used dimensional lumber as planned. We decided that the bbed posts looked good at 2 1/4″ square. This is an awkward measurement because it doesn’t match any off-the-shelf lumber sizes. It did; however, match the thickness of three sheets of 3/4″ plywood.

Knowing that the bed was going to made up of interlocking elements of laminated plywood really helped with the production. All I needed to do to prep materials was set my table saw fence to 2 1/4″ and start cutting down some sheet goods. There are some pieces that weren’t 2 1/4″, but the material prep was pretty straight-forward; rip sheet into strips and crosscut to length. 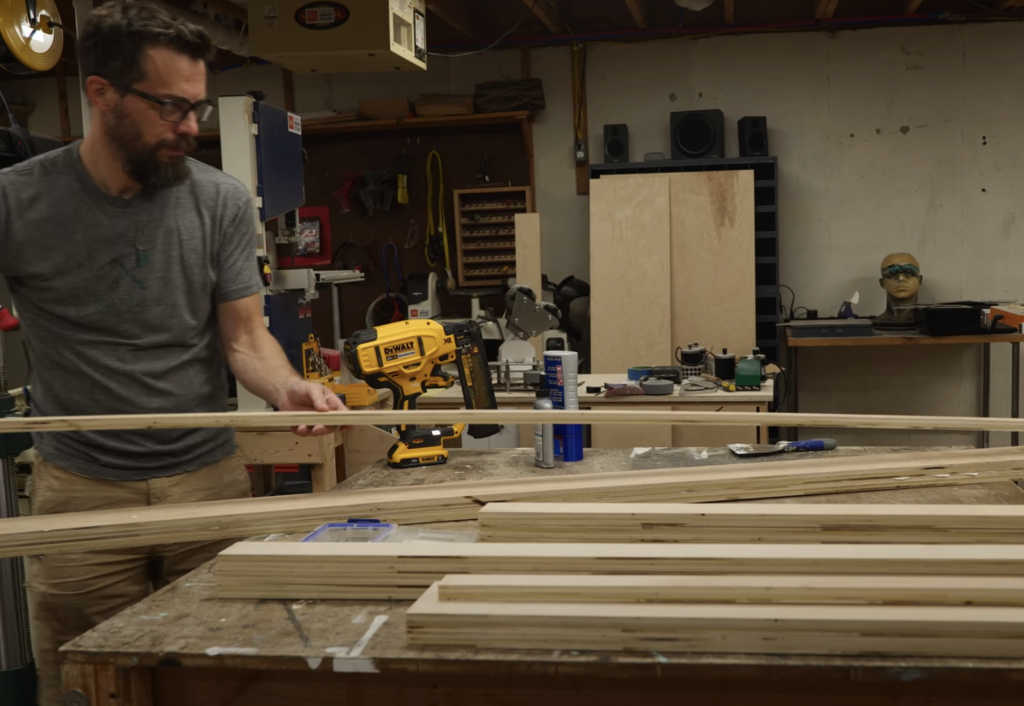 Now that the strips of plywood were cut to length, I began gluing up the strips to make up the bbed frame beams. This canopy bed needed a headboard assembly, a footboard assembly, two lower stringer to support the mattress, and two upper stringer to join the head and foot board assemblies together. Each assembly would in essence be a large rectangular frame; two upright side beams that would capture the head or footboard capped with a horizontal beam.

The design called for a clean exterior lacking any visible hardware. This design constraint was a fun challenge. To minimize fasteners, I decided to employ a mortise and tenon style joinery technique. By stacking the plywood in a way that left a space to interlock with other beams, I could simply glue these joints together creating a strong assembly.

The lower, mattress holding stringers were made of two sheets of outward-facing plywood and an interior shorter strip that was glued and screwed in place for extra strength. This shorter piece would hold the mattress slats in a later step. Now that the headboard assembly, footboard assembly, and the four stringers were glued together, I added some thick edge banding to all of the exposed plywood edges. Now they were ready to assemble. 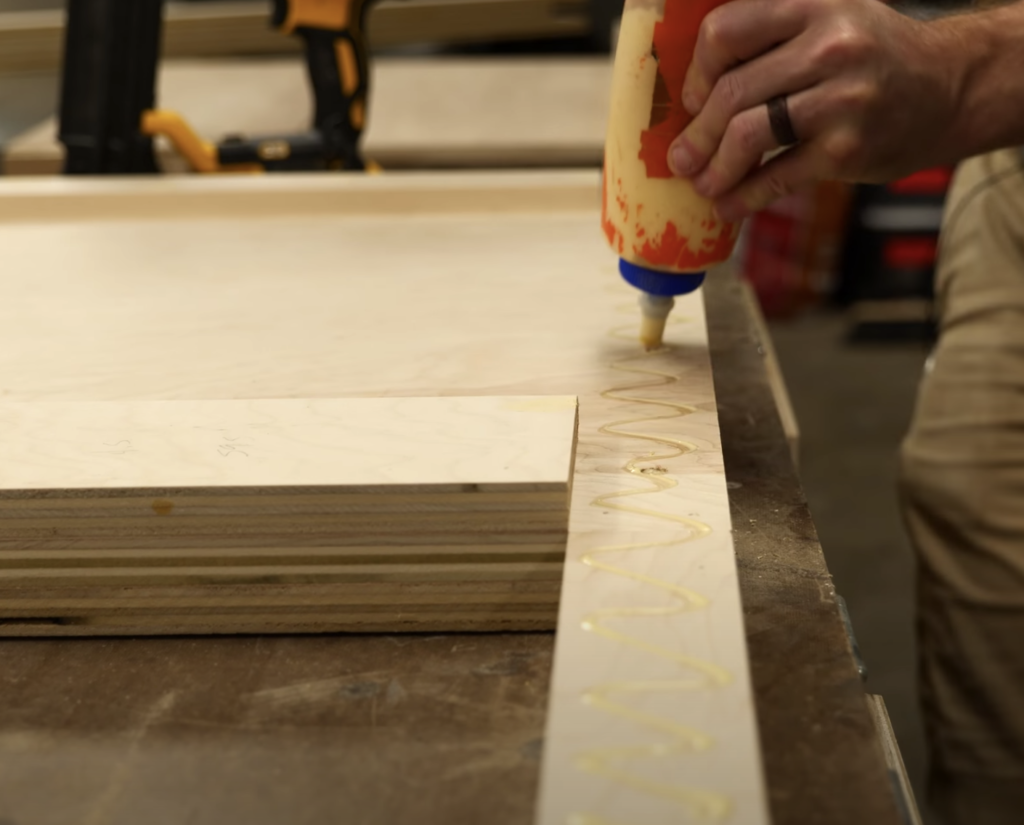 3. Join the Assemblies Together

To connect the headboard and footboard assemblies together with the lower stringer, I decided to use commercially available bed frame hardware. Like most bed frames, I wanted this canopy bed to come apart if needed. This two-part hardware kit is screwed into the head/footboards and connecting brackets are screwed into the ends of the lower stringer. When hooked together and tightened, the lower bed frame is fairly rigid. We used smaller hardware sets because of the minimal nature of the bed, so we added some reinforcement screws from the back of the headboard to add rigidity.

We now had two standing rectangular frames joined at the bottom. To connect the tops I used two other beams we glued up in step 2. These beams were flat on the ends and were designed to butt up against the frame faces. Again, because we didn’t want exposed hardware, I had to come up with a solution to joining them from the inside. Using dowels to connect the upper stringers to the head/footboard faces would allow them to connect in place without it being a permanent bond. Unfortunately, this joint wasn’t very strong so I added a pocket hole on the top of the beam that you wouldn’t see to lock those joints together. 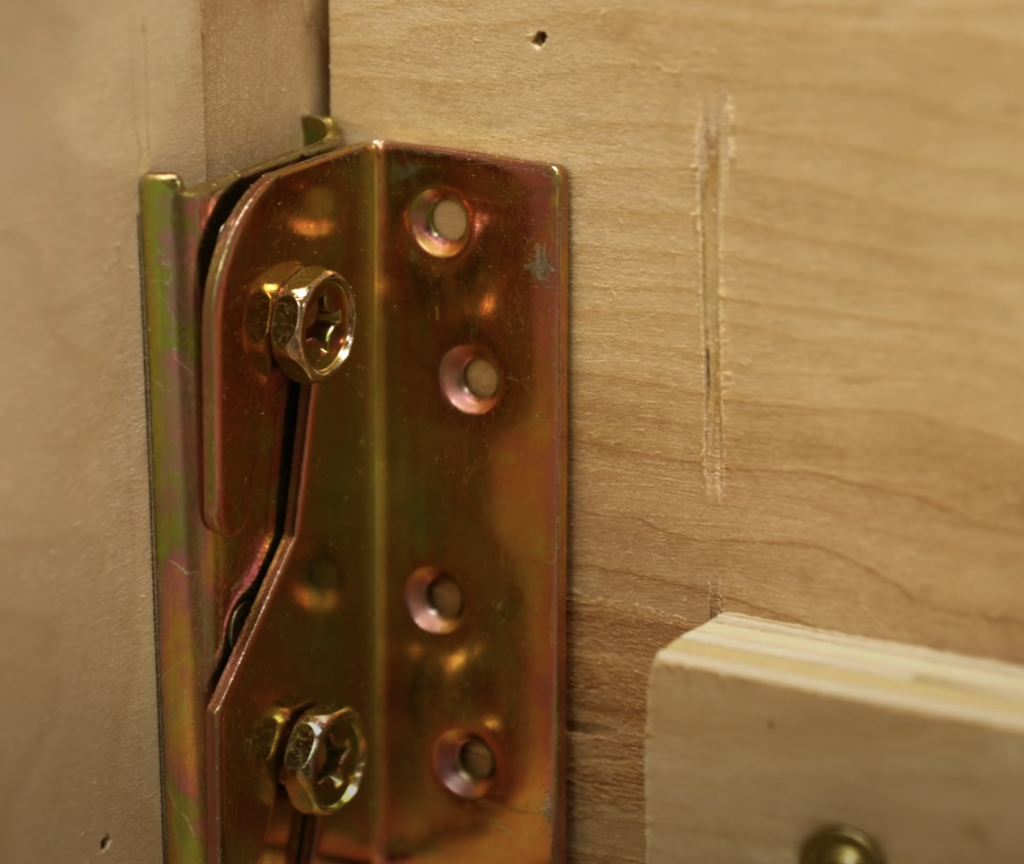 Now that the bed was dry fit together and I got final approval from the stakeholders, I could add some finish. I chose to use polycrylic to protect the canopy bed frame. The water-based varnish doesn’t darken the color of the light wood the same way oil-based, polyurethane does. I sanded in between two coats and it looked great. Because my daughter’s bed doesn’t have a boxspring, I had to add some wooden mattress slats. I used simple, inexpensive furring strips cut slightly shorter than the opening so the slats don’t rub on the stringers. To prevent center sagging, I cut down a 2″x4″ and added some feet. This element was pocket-holed down the length of the bed frame from headboard to footboard under the slats.

At this point, I could disassemble the bed, carry it into my daughter’s room and reassemble it. It look awesome! It was minimal and clean from the outside which made us all very happy. My daughter’s room doesn’t have an overhead light or fan to consider, so the height wasn’t a problem. The problem of lighting needed to be addressed. My wife purchased some paper lanterns and I rigged a cluster of them together inside the upper frame. I added a dimmer remote to the light cluster and this project was done! 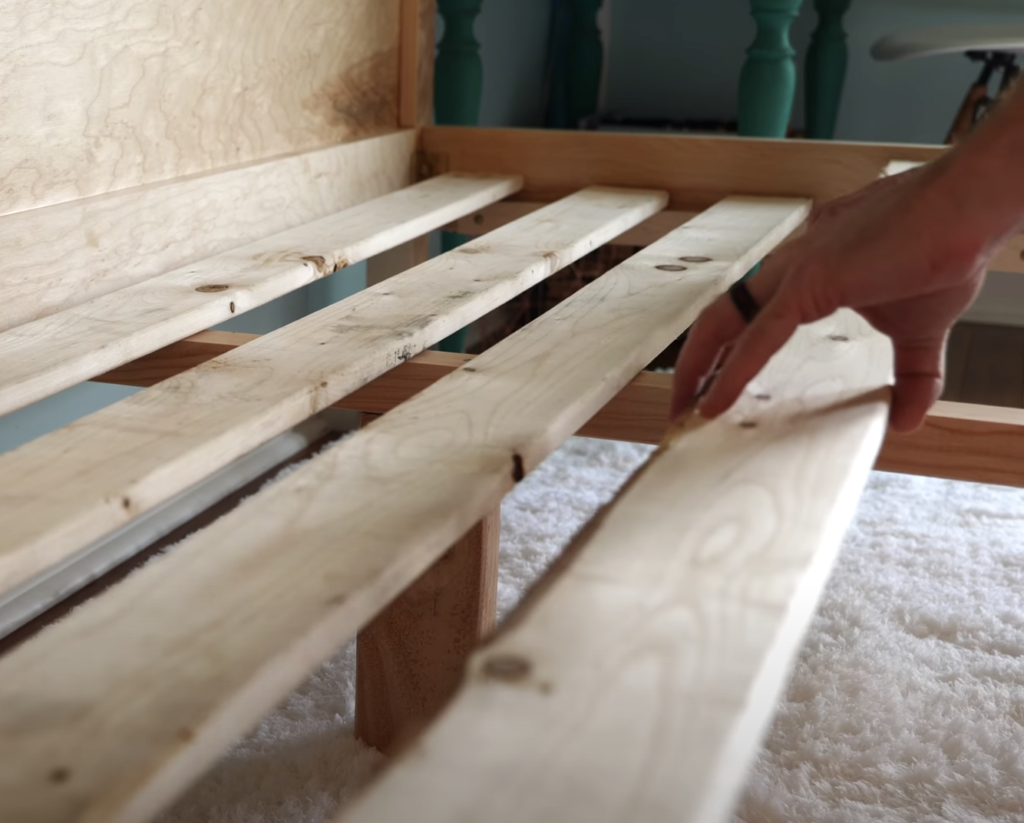 Make One For Yourself, All Mattress Sizes!

Because we designed this modern canopy bed in Fusion 360, we can easily transfer that model into our digital plans process. Fusion 360 allowed us to easily change the bed’s parameters so we can offer you digital plans for this bed in 4 different mattress sizes! If you are interested in making this bed yourself, click the button below. There you will find a link to the products we used (Amazon Affiliate links) as well as the plans that include easy-to-follow steps and cut lists.