I wanted to make a portable grill that fit on our farm’s fire pit. Actually, I wanted it to fit over any fire pit, so I used some scrap metal to make a quick, portable grill.

The initial concept for this project is that I wanted a grill grate to be suspended over an open fire. I’d prefer that the grill have a small lip around the perimeter so the food doesn’t roll in into the fire. Using some scrap metal that I had in my shop, I decided to use some expanded steel grate material and some 3/4″ angle iron to make the grill grate. A cutoff wheel on my angle grinder cut through the steel really quickly and I had a nice rectangular piece to work with. The side pieces were cut on the metal-cutting bandsaw at 45-degree miters.

When welding items into specific angles, I usually use these small red welding magnets that have a 45- and 90-degree segments. Sometimes I like to weld items together at different angles. In that case, our buddy Andrew Klein sent us some magnetic work-holding jigs to try out. These Mag-Tool holders use magnetic switches and protractors to set a specific jig angle, and they clamp to the metal pieces as well as the metal table. I was really surprised how well they worked. Even though I was clamping our pieces to make a 90-degree angle, they had longer arms to more securely hold the metal while I welded them together. 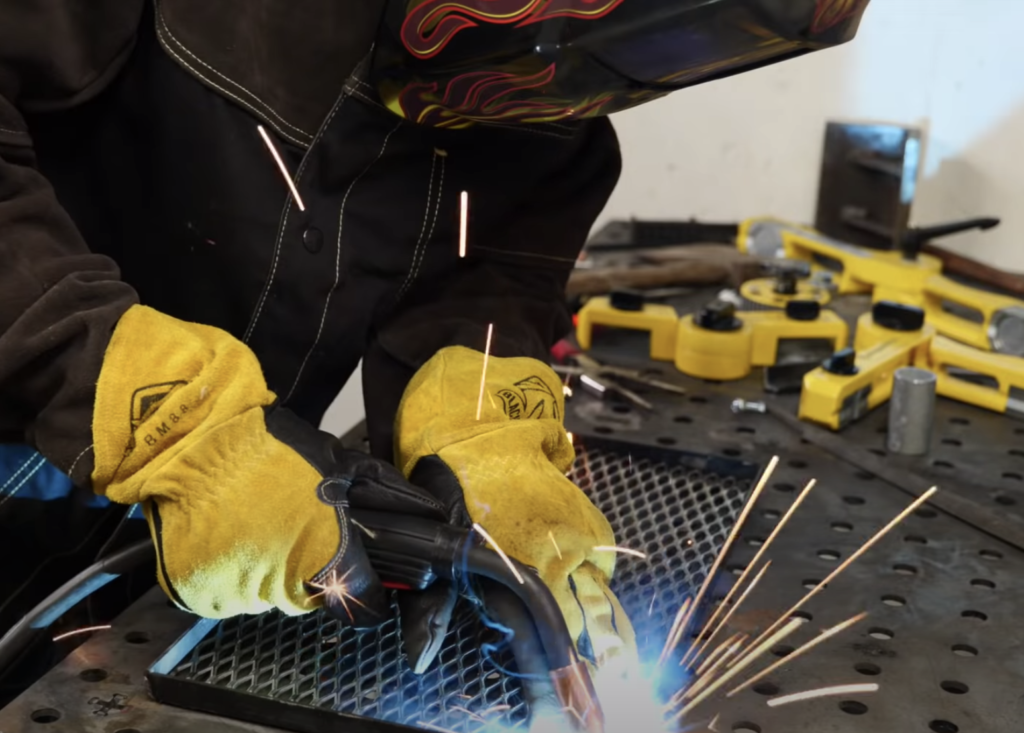 The central upright for this suspended grill would be a 1″ steel pipe. You could just simply weld the grate to it if you wanted, but I wanted to be able to control the heat by moving the grate closer to and away from the fire. I happen to have another metal pipe that is slightly larger than the original, and it slid nicely over the 1″ diameter upright. This sleeve was then welded to the back of the grate. To keep the grate and the sleeve in a desired position, I needed to add some friction. I figured a simple bolt threaded into the back of the sleeve, pressing on the taller pipe would work perfectly. I drilled and tapped the hole in the sleeve and added a modified bolt that was easier to turn. 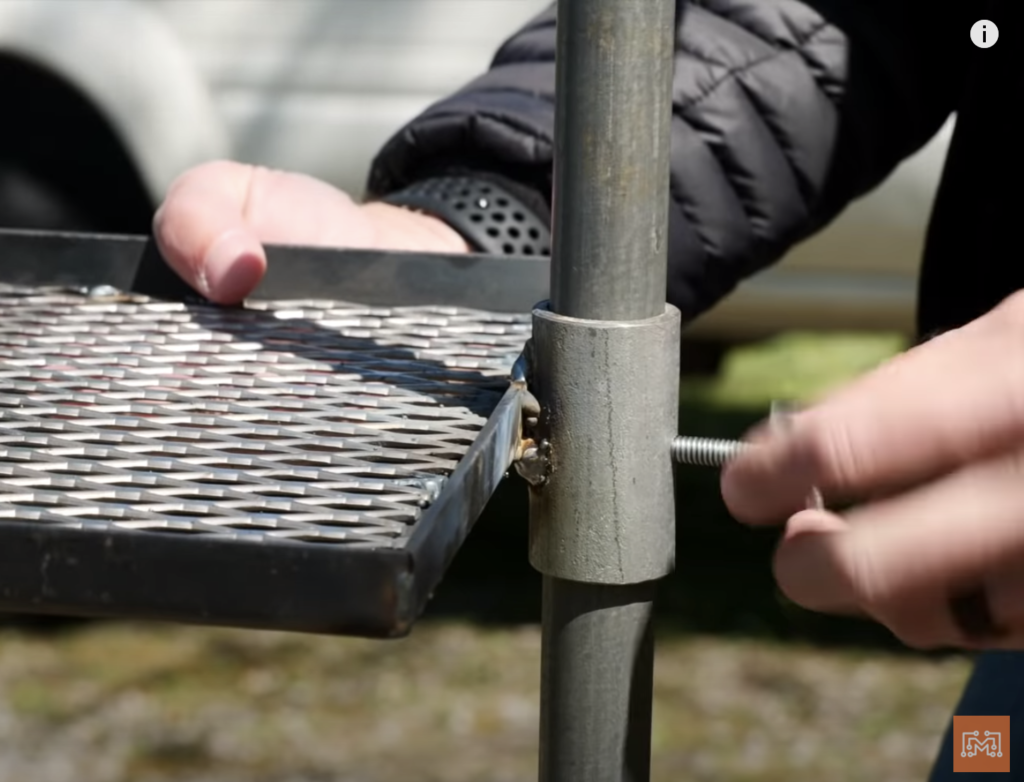 To make sure the grill assembly sticks firmly into the ground and not slow slump over with my dinner on top, I decided to cut the bottom of the central pipe into a spike. That’s all and good, and should work okay, but I think it needs more. I think welding on a little rebar spike would help provide two essential functions. First, It would offer a counter-torque by adding another contact point that sticks in the ground. Secondly, the spike could be made from a 90-degree bend that I could use as a foot peg to help push the grill into the ground. I ground down the end of the rebar to a point and the grill was done! 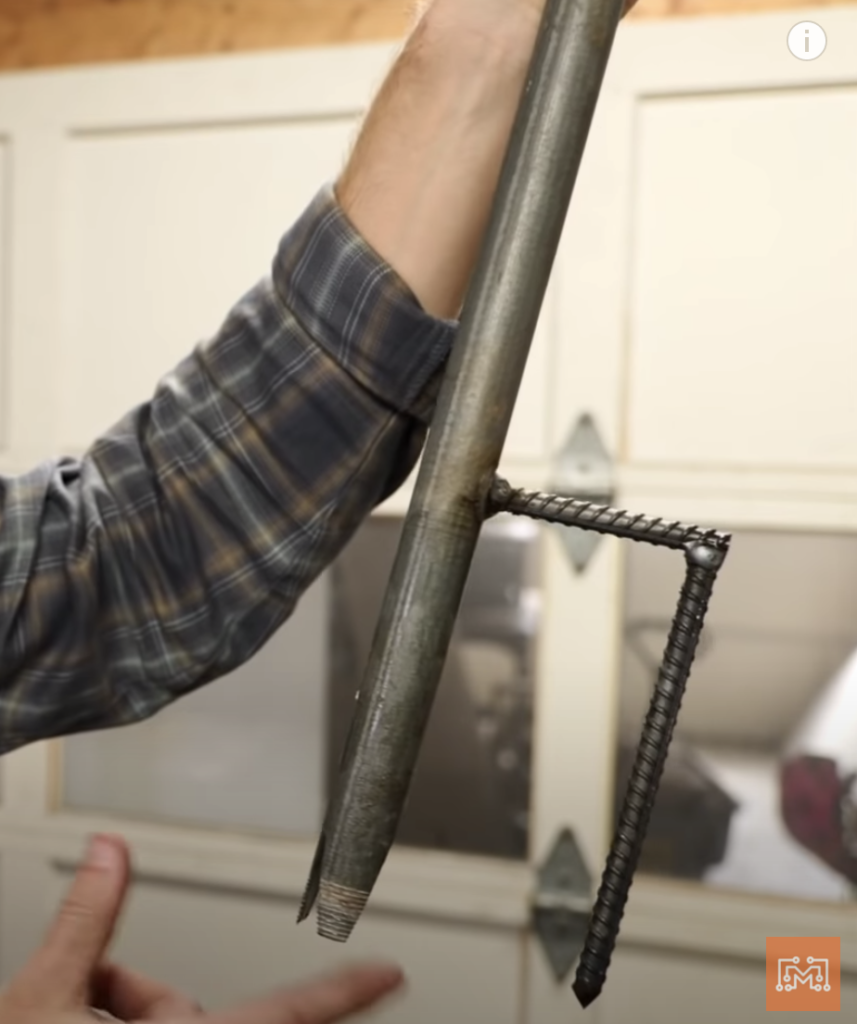 I placed the grill over the fire pit at the farm and added some sausages for lunch. It worked perfectly! I left the central pipe long so that I could add some other cooking features later on. This simple metal grill would absolutely rust if left outside in the elements. I plan on taking the grill off the fire pit when we put the fire out and storing it inside the barn. I don’t want to cook on rusty metal so making it portable is almost a necessity. 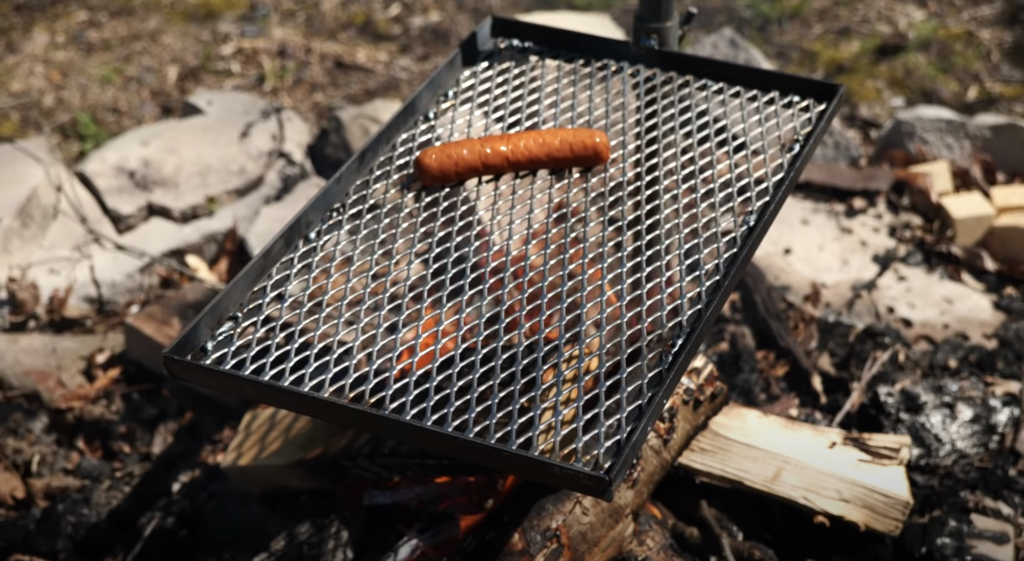