I wanted to make a nice mid century modern credenza to hold my newest fresh-water fish tank. Using some walnut plywood, I built a sliding-door cabinet to hold all of the fish tank’s support equipment.

We started this credenza project in Fusion 360 where we created a 3d model of the mid century modern piece. The design had to a good mixture of aesthetics and structure because this credenza if going to hold my new fresh-water fish tank. The 29 gallon tank and equipment weighs about 300 lbs (135 Kg) so it had to be strong to support it and still function as a nice piece of furniture. I wanted the credenza doors to slide from side to side instead of open on hinges. Modeling the credenza allowed me to visualize designs for the doors and to decide on stylistic leg assemblies. After I decided on a design, I created a cut list and began breaking down the walnut plywood. 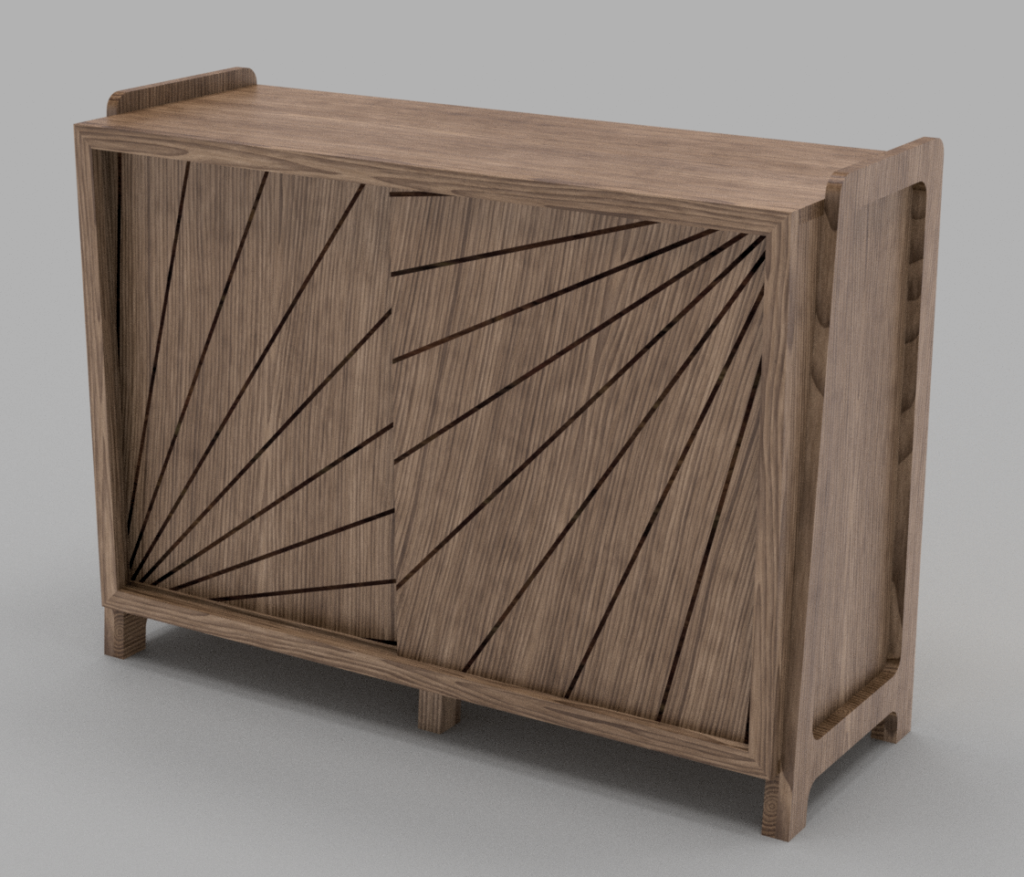 2. Breaking Down the Walnut Plywood

I know that walnut plywood isn’t readily accessible to a lot of people (tbh, it isn’t really accessible to me either), and it usually costs more than maple or birch plywoods. I found a supplier online and had to have the material delivered to my house. If you’ve never used walnut plywood, this totally sounds like a hassle, but believe me when I tell you, it’s totally worth it. Walnut plywood is really beautiful and looks so much nicer than stained birch plywood. I used the cut list from Fusion 360 and my table saw to break down the material into its individual components. Basically, the credenza is a box with (or without) shelves. Once I cut the pieces to size, I used a center-finding jig to place holes for dowels and applied walnut edge banding with an iron. 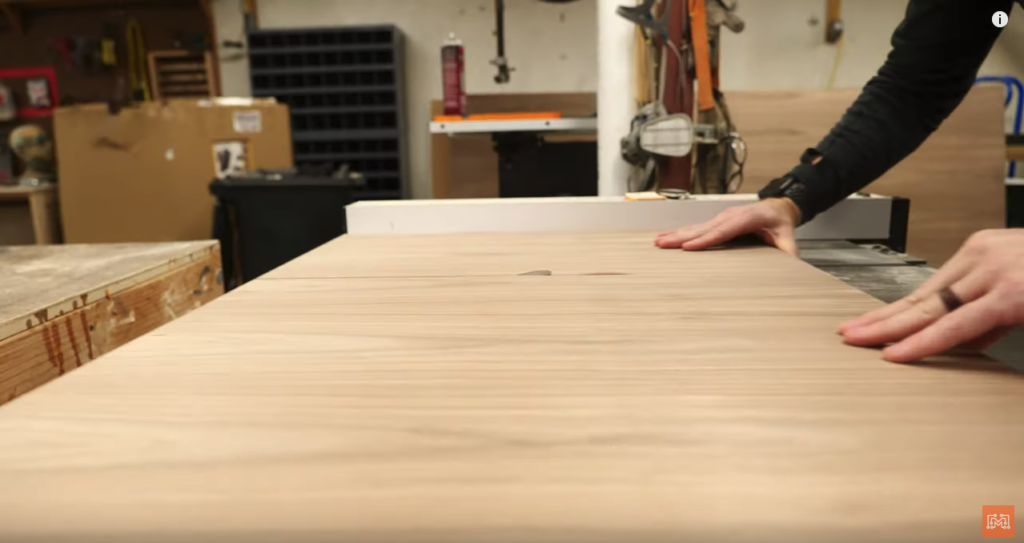 The sides and the center support are sandwiched in between the top and bottom panels. To save on the expensive walnut plywood, I used a panel of 1/2″ maple plywood for the back panel that sits inside a rabbet along the back. Because I wanted half of the credenza to have shelves, I used a shelf pin jig to place those holes in the right places. Now that there is a nice looking plywood box, I had to cut the leg assemblies that the cabinet would sit on.

I cut the curved legs on my Avid CNC, but you could totally measure out and cut the pieces with a jigsaw (our plans will include those measurements). Because the fish tank on top will be pretty heavy, I wanted to make sure that the credenza cabinet sat directly on some portion of the legs, not just attached to the sides with screws. To accomplish this, I screwed in the two taller leg assemblies on either side, mounted a doubled-up short leg directly in the center. This arrangement allowed for just the center legs to sit in direct compression. To help offer more support, I cut some matching shorter legs and glued them to the inside of the outside assemblies. 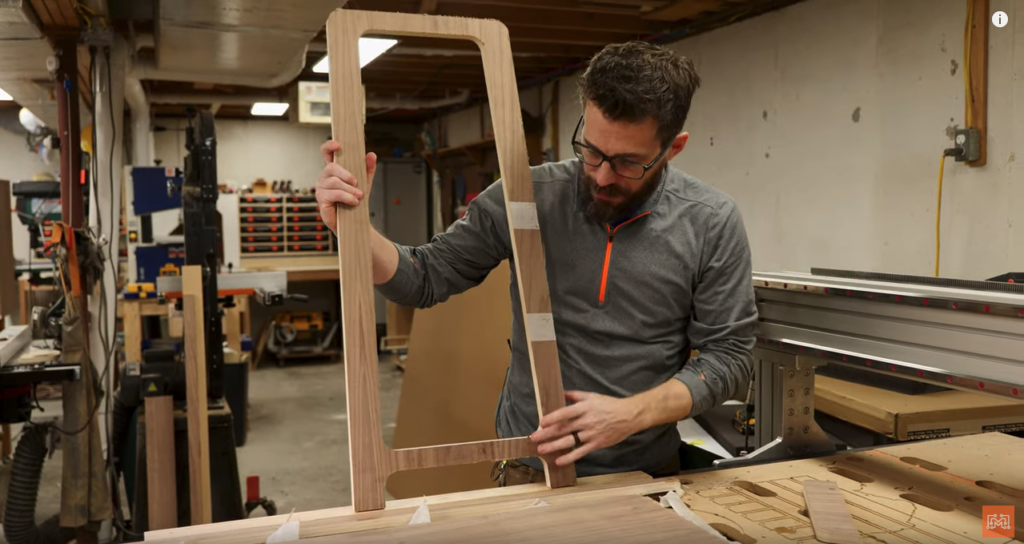 Now that I have a free-standing, structurally-sound open cabinet, I want to make some unique sliding doors. I came up with a simple radiant design that Josh cut on the CNC. We took those cut lines and filled then with darker walnut strips creating a cool pattern. Because I wanted these doors to slide back and forth, I used some walnut lumber to make a strip with two channels cut into it. Two of these strips, one top and one bottom, would hold the door panels, allowing them to slide in each channel. Before fixing them in place permanently, I used a biscuit jointer to cut a small slot in the bottom of both door panels. To help reduce friction while moving, I cut some small pieces of acrylic and glued them into the bottom slots. I mounted the strips and the doors captured in them inside the credenza opening. 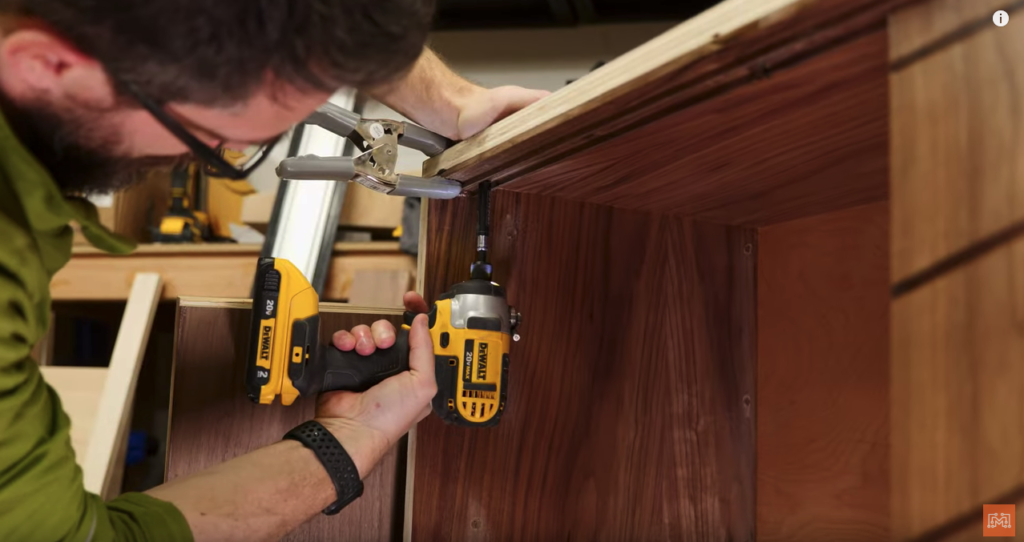 To hide the front edge of the door strips, I used more walnut lumber to make a simple mitered face frame. These four pieces were glued to the front of the plywood box and secured with pin nails. I used polycrylic finish on the entire cabinet and paste wax inside the door channels. Before I set up the fish tank, Josh and I sat on top of the credenza and made sure that the doors still worked under load. 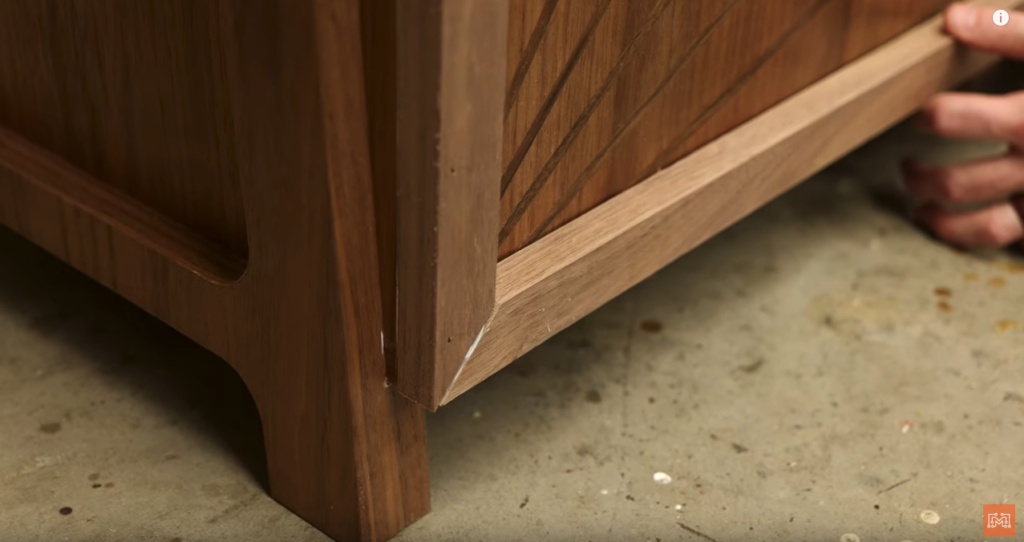 I am really happy with how well this credenza turned out. Like most projects I do, I started with a problem: I needed something to hold up a fish tank. I wanted a nice blend of function and form. Throwing back to the mid century modern design was something that I don’t typically do, and I’m happy it turned out this nice. If you want to build on of these for yourself, check out the digital plans we have available down below! 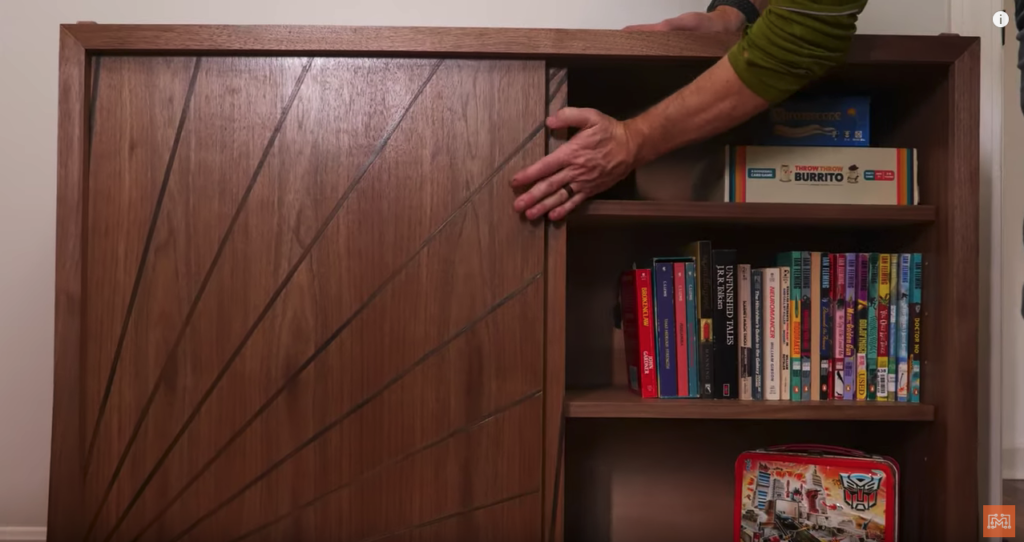