In one of most fun projects yet, we turned a Christmas tree into a giant, interactive video game for our whole community to play!

To make our Christmas tree game light up in the way that we intend, we have to be able to control each LED in an entire strand of lights. Traditional lights just have power run to colored bulbs, which blink or stay lit all together. We found a strand of individually addressable LEDs that are made for outdoor use. This means that each light has a small circuit board attached to each bulb that will receive power and a data signal from a micro-controller. I’m using an Arduino as the micro-controller to send out a signal to each specific light among the many strands.

Our game is very simple, there is a “player” that is restrained to the lowest level of lights in our tree-shaped matrix. That “player” can move left or right to avoid falling “snow.” When the game is played, the player will move while white “snow” lights fall randomly from the top of the tree-shaped matrix. If the “player” and the “snow” occupy the same space on the matrix in the arduino code, you lose. When the game isn’t being played, I used a simple LED flash library to create a Christmasy-looking color series that flashes until someone activates the game. 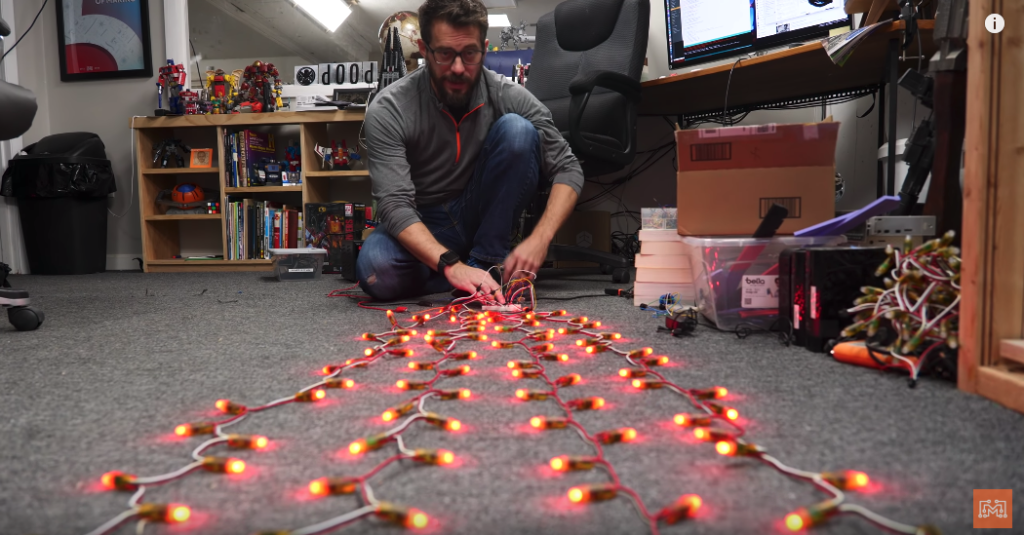 Now that the game code is working, the lights are blinking appropriately, and the control buttons are moving the “player” around, it’s time to make it look like a tree. To do this, Josh and I drilled holes at even space along some thin PVC material and fed in the lights. Covering those light boards with ping pong balls will help diffuse the LED light and give the whole tree a polished and clean look. These seven LED light boards are then connected to a hub at the top of a 10-foot metal pole. To keep the pole firmly planted on the ground, I poured a bucket of concrete and fixed a pole holder into it. 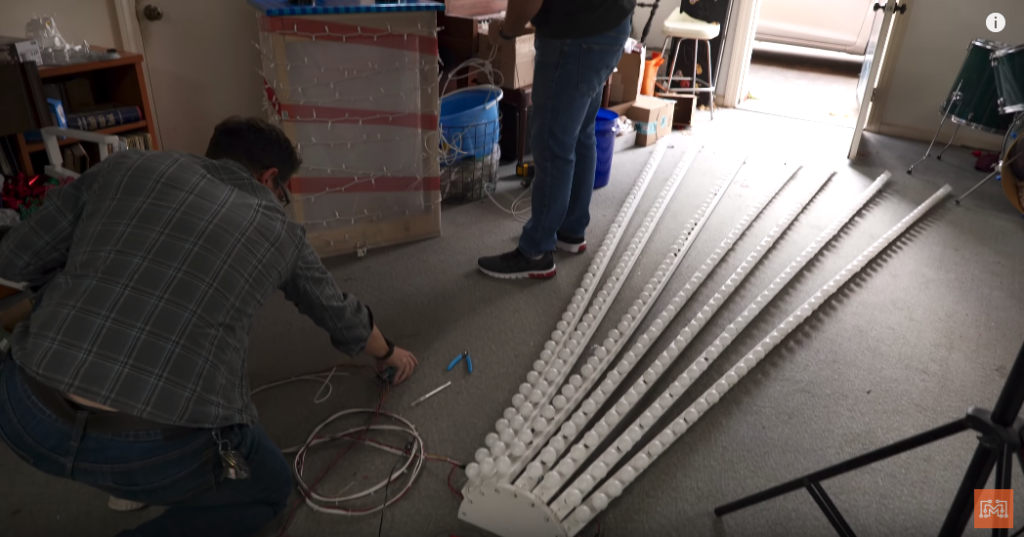 The tree was really looking the part and we focused on the platform to hold the control buttons. Josh made a simple 2×4 frame box that we also covered in wrapping paper and lights. The top of the platform held two large arcade buttons connected to the arduino in the tree with a long set of wires. The player starts the game and stops the Christmasy light show by hitting one of the large arcade buttons. Once the game starts, the player uses the left & right button to move the “player” out of the way of the falling “snow.” As the game progresses, there is more “snow” and it falls faster. We decided to make the “player” change colors as the game increases in difficulty so you can gage your progress through different levels. 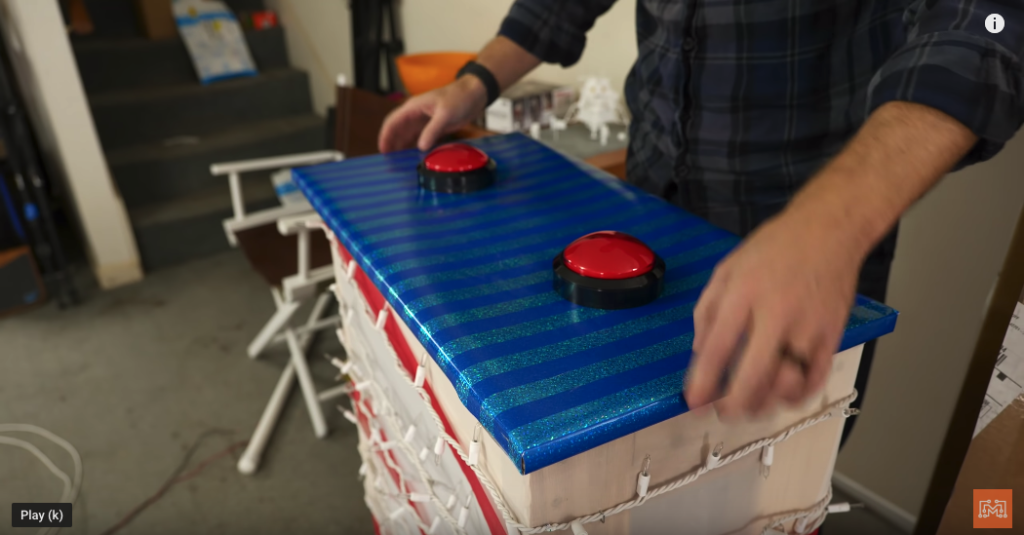 Now that the tree could stand on its own and the light boards can be fanned out to a lawn-decoration style tree. To add to the ambiance, the concrete bucket will be fixed to a larger semi-circle made out of melamine to decrease the chance of tipping. Josh made up some simple plywood boxes to cover the bucket, the control boards, and the wiring that we wrapped in Christmas present paper. We added a star to the top of the game tree and decorated the whole installment with tons of festive elements.

Rather than setting this game up in my house and letting just my family play it, we asked our town leadership if we could set it up downtown for the whole town to play. They loved the idea, and set up the Giant Christmas Tree Video Game downtown around a lot of foot traffic. I was so excited to see people playing the Christmas Tree Video Game and seeing the look on their faces when they see something for the first time. We really wanted to make an interactive element to a regularly passive decoration. It was a smashing success! 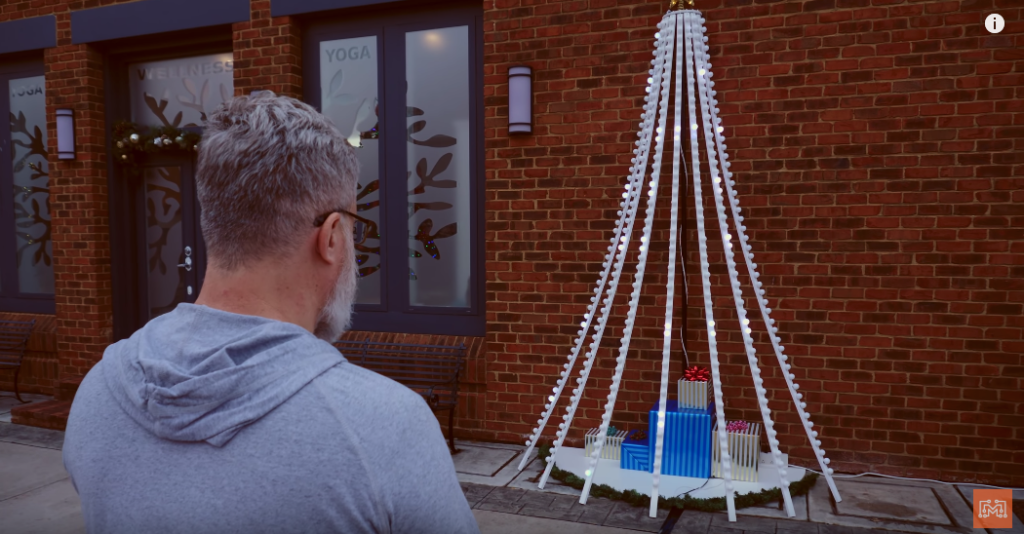 I really hope that you and your family have a safe and happy holiday season. We made a Christmas Tree Video Game, but you can apply these elements to any decoration, maybe your roof or an entire light display. I hope that you are inspired to make something that it traditionally static more fun and interactive. Happy Holidays from all of us at I Like to Make Stuff!