Making a Gaffi Stick from Star Wars & The Mandalorian

I wanted to make a real gaffi stick, the Tusken Raider weapon from Star Wars. Recently, it was featured in The Mandalorian where it did some serious damage and I wanted one of my own!

The gaffi stick is a melee weapon used by the Tusken Raiders in the Star Wars universe. They travel around the deserts of Tatooine fashioning weapons from scavenged items. There is no standard for these weapons, even in the film it appears that each raider makes their own unique gaffi stick. This is great because it give me some freedom to make mine with some artist liberty. First, I went to my local Tractor Supply and bought a piece of 1″ round bar and some 3/4″ round bar.

Next, I took the thicker metal out to the farm where I keep my small forge. I heated up one end of the bar until glowing red and bent it over the horn of my anvil making a screen-accurate curved handle. The weighted club head will be attached to this spiked end in later steps. The next step was to create a spiked end piece from the thinner, 3/4″ bar and weld it onto the end of this curved head. 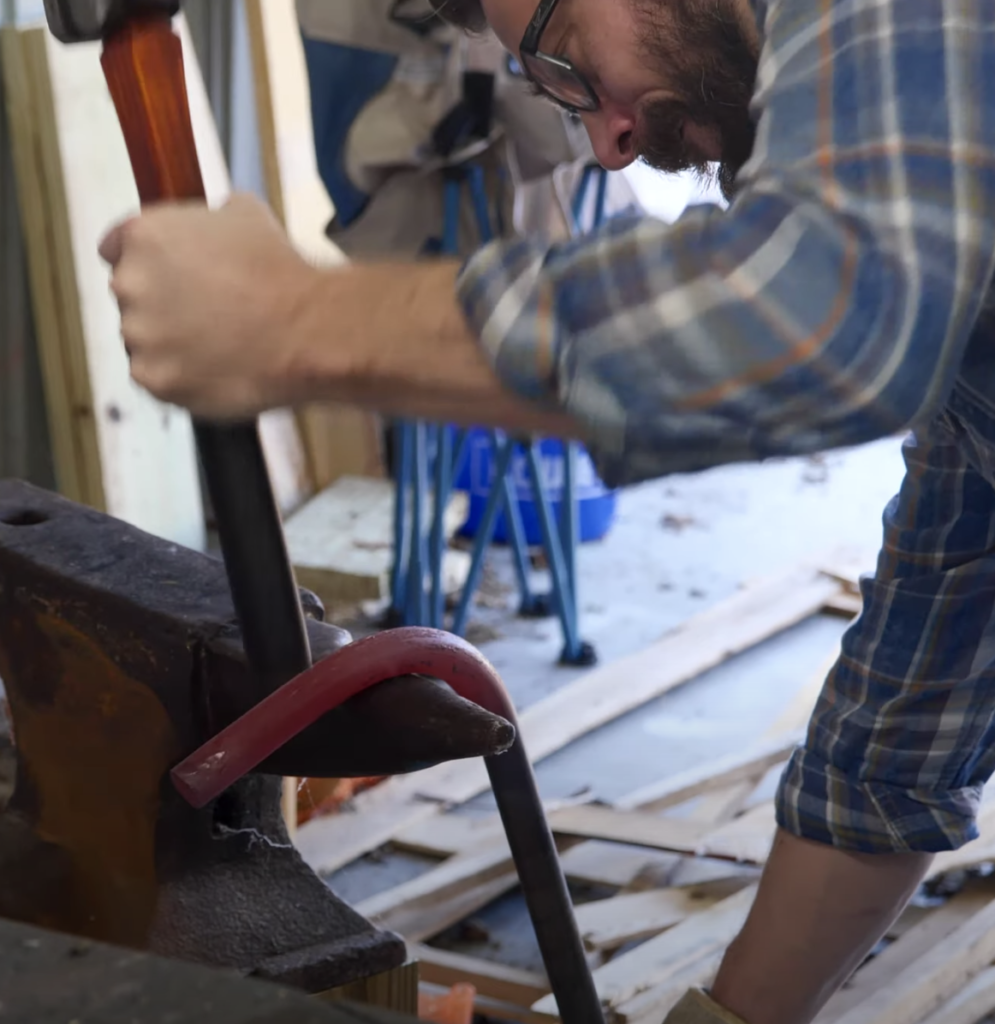 On the end of the gaffi stick, the Tusken raiders seem to have attached a lawn dart looking piece of spiked metal with fins. There is a coupling at the joint that I can fake with an old bearing, but I do need to make a legit spike. To do this, I used my Bridgeport mill to flatted the ends of the 3/4″ round bar into a four-sided spike. I was really happy to finally use that machine on a project and it looked super cool!

I cut the fins from some scrap sheet metal and welded them onto the spike’s upper shank. After welding placing the old bearing over the shaft, I welded the spike to the bottom of the curved upper handle and slid the bearing over the joint. I tack welded the faux-coupling in place and it hid the joint beautifully. At this point, I had the deadliest shepherd’s hook ever! 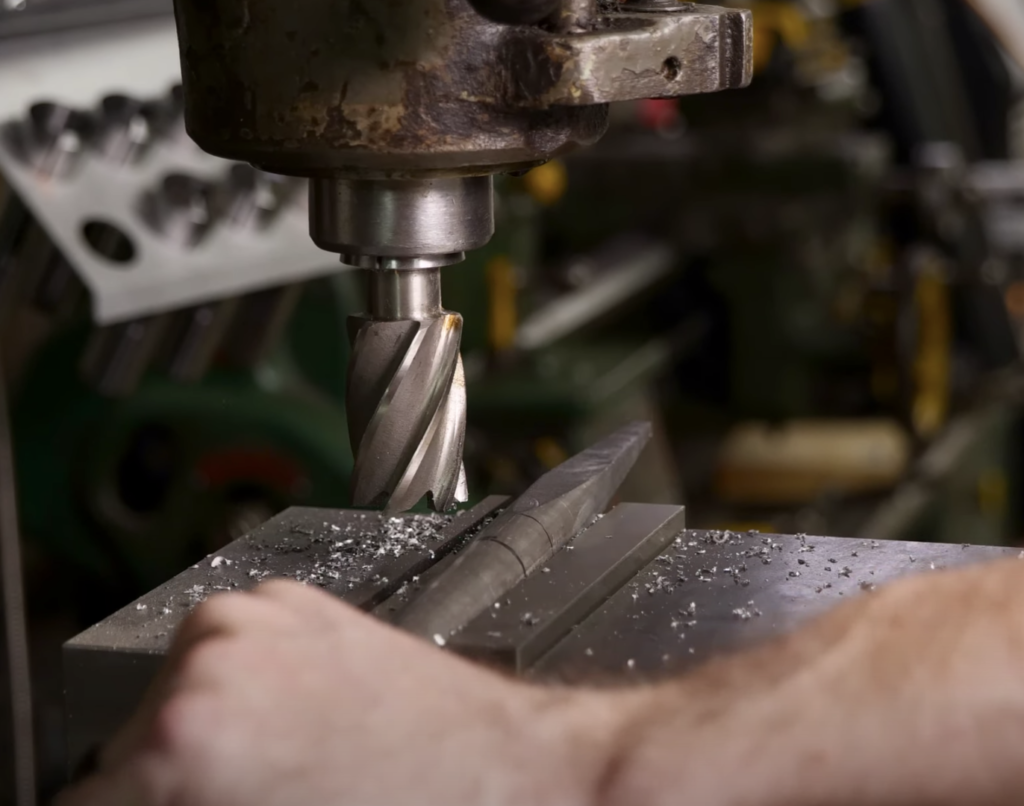 Now this was the trickiest part. In the films, there is a rounded club head embedded in the spiked head of the gaffi stick. Since I wanted to smash a bunch of stuff with this real life gaffi stick, I wanted it to be durable, yet shapable. I first tried to heat up a massive chunk of steel and taper the edges using a hammer. This didn’t work at all because it is more of a power hammer task, and I don’t have one of those. Next, I considered using wood, but instead used a piece of material I’ve been using on the metal lathe; delrin. Delrin is a super hard polymer material used in tube benders and metal workin applications. I had a big round chunk of it that I use when practicing on the mill.

I discovered that delrin could be turned on the wood lathe using regular lathe tools, so I chucked it up and got turning! It was surprisingly easy to shape on the lathe, but it made a terrible mess. I gave the club some shaping and some detail grooves that I finished off with the angle grinder, making a crosshatch pattern. Using a large forstern drill bit, I bored a hole in the center a little smaller than the new spike I created on the upper stick. To ensure a tight fit, I heated up the new pointy end of the gaffi stick and pressed it into the delrin club. It melted the plastic and fit perfectly. 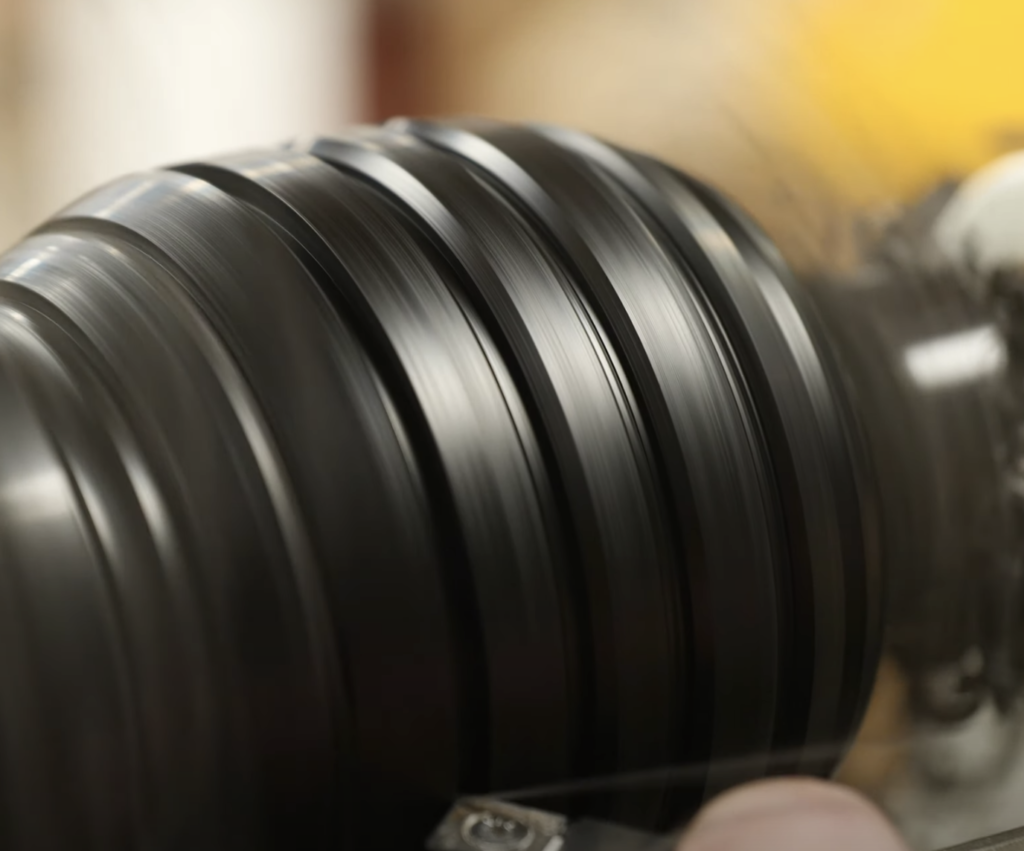 TO sum up this project, this gaffi stick is heavy, dangerous, and really impressive. I can totally hurt someone or something, so if your choose to make one, be careful and responsible. I chose to test it out on some plaster Storm Trooper heads that I made using a cake pan and some plaster of paris. It was really fun to let out some steam just like the characters in The Mandalorian and the rest of the Star Wars universe. After a loud, honking Tusken Raider cry, it was time to hang this real life gaffi stick on the wall next to all of my other Star Wars projects! 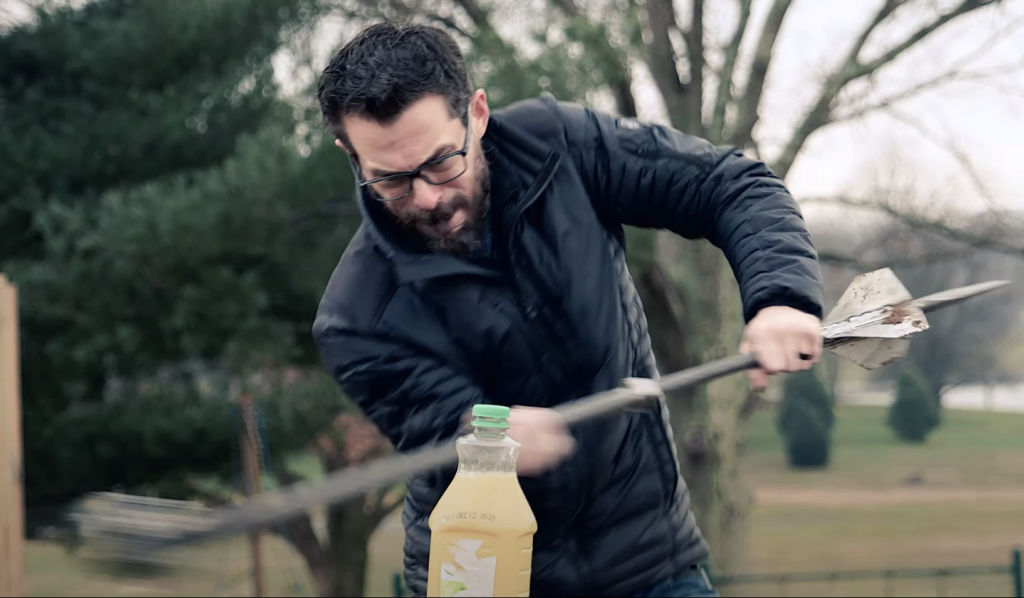