Making a B Bender Guitar for Rob Scallon

By Josh PriceFebruary 29, 2020Projects
No Comments

In this project, we are converting a beautiful, stock guitar into a custom B Bender for Rob Scallon, an amazing musician on YouTube. Come see how I designed the mechanism, cut a channel in the guitar, and made it fully adjustable for the player.

The concept behind this custom B Bender guitar is to pull the B string mechanically up a full or half step without affecting the other strings. There are a few existing designs to accomplish this, but I felt like a mechanical linkage made out of metal would be the most reliable and consistent. The difficult part of putting these hinged elements together was making sure that all of the mechanism could fit inside the guitar without completely destroying it.

The Chapman guitar we were sent for this project was a Telecaster style, which allowed the strap nut lever to move freely. The tummy scoop on the back presented some challenges when placing the B Bender assembly. I wanted to avoid any contour cut or beveled surface because it would be more difficult to route out the cavity. After making a template of the guitar on a scrap piece of plywood and redesigning the linkage, I had a design that would work.

Using some scrap metal rod and flat bar stock, I cut and drilled slots and pin holes to connect the S-shaped mechanism. The screws that would act as pivot points were also used to connect the assembly to the guitar cavity. To counteract the force of gravity pulling the guitar down, and to reset the guitar upward when the player pulls the B Bender down, I had to strategically place a heavy spring alongside the linkage. Once all of this was working well on the plywood, it was time to carve a hole into that beautiful Chapman guitar. 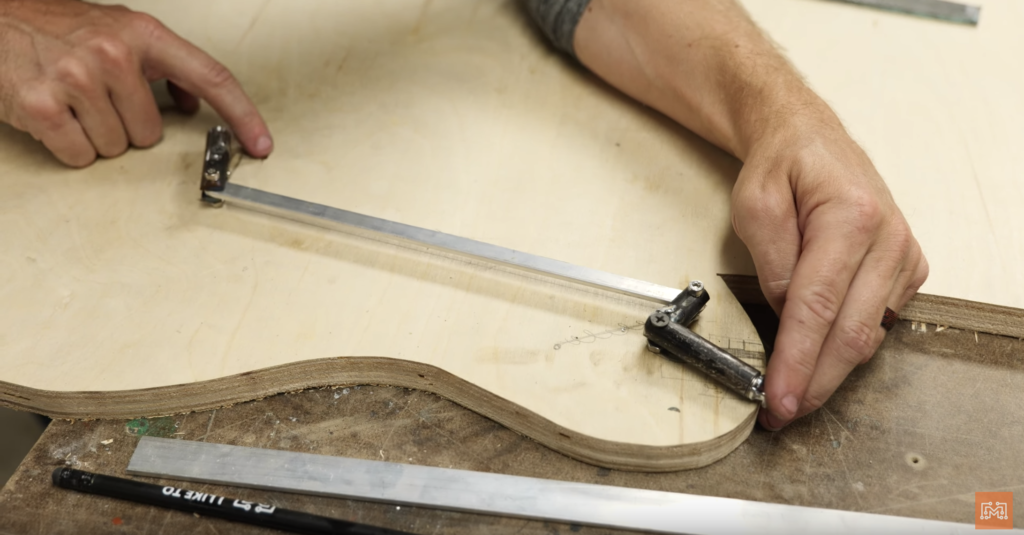 The B Bender linkage was ready to be installed in the guitar, but I first had to cut into the back in just the right place. To make the cleanest cut I could, I chose to use the router with a guide bushing and a template. To make the template, I took a photo of the plywood mock-up and outlined it’s confines. I then took this photo into Adobe Illustrator and traced the outline. Using this vector graphic, I cut a template out of clear acrylic on the Glowforge laser cutter.

Because I was using a router bushing, I had to offset the template by 1/8″ so that the bit cut the exact outline I wanted. This method would give us a perfectly matched hole in the back of the guitar. I also didn’t want to cover the mechanism, I think it looks awesome, so I decided to cover it with another piece of clear acrylic. This was actually really easy using the laser cutter. My first vector graphic would be the outline of the photo (this will end up being our cover); then the 1/8″ offset I mentioned earlier to account for the router bushing; and lastly another 1/8″ offset from the previous one so the router could carve a shallow shelf for the acrylic cover to sit on.

I taped the multi-layered template to the back of the guitar and took out each template as I finished that cut. It worked perfectly. Now it was time to place the B Bender mechanism in place and make sure it all worked. 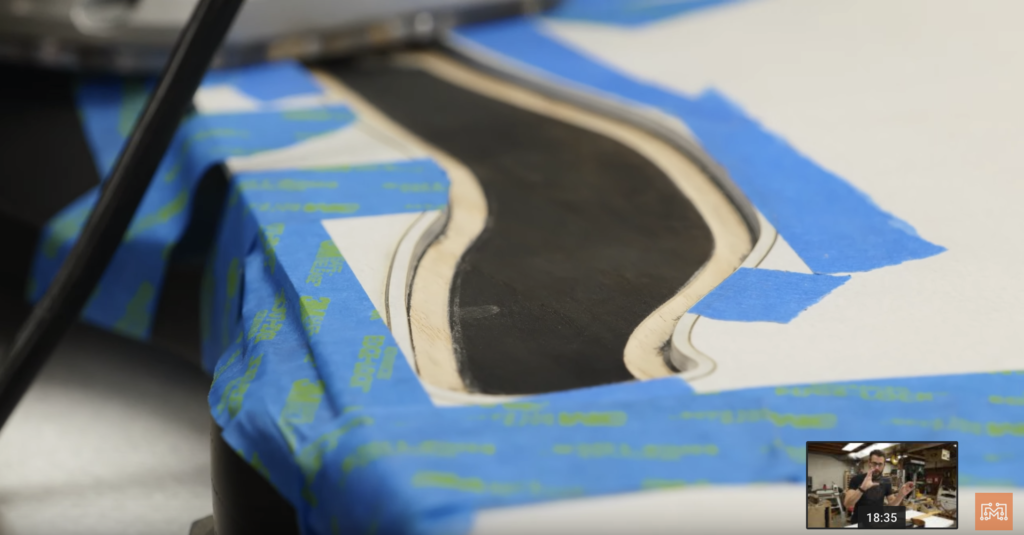 The process of mounting the assembled linkage in place was pretty straightforward. At this point, I was really happy that I did all of the planning work on the plywood template. The B Bender mechanism fit right in place and I secured the pivot point mounting screws in place. I did; however, need to adjust the placement of the spring a little, but it wasn’t a problem. I had to go back and add some small scraps of wood into some open spaces in the cavity so that I could screw the acrylic cover in place.

The beauty of this B Bender design is that the B string can be routed into the mechanism to use as a B Bender, or it could be ran through the traditional holes in the original guitar. the design allows for adjustability of the linkage. Inside the cavity, I mounted a small bracket with a set screw so that when you tighten the screw, it make a hard stop for the arm to hit. If you want to bend the string a full step, just loosen that set screw; a half step, just tighten it. 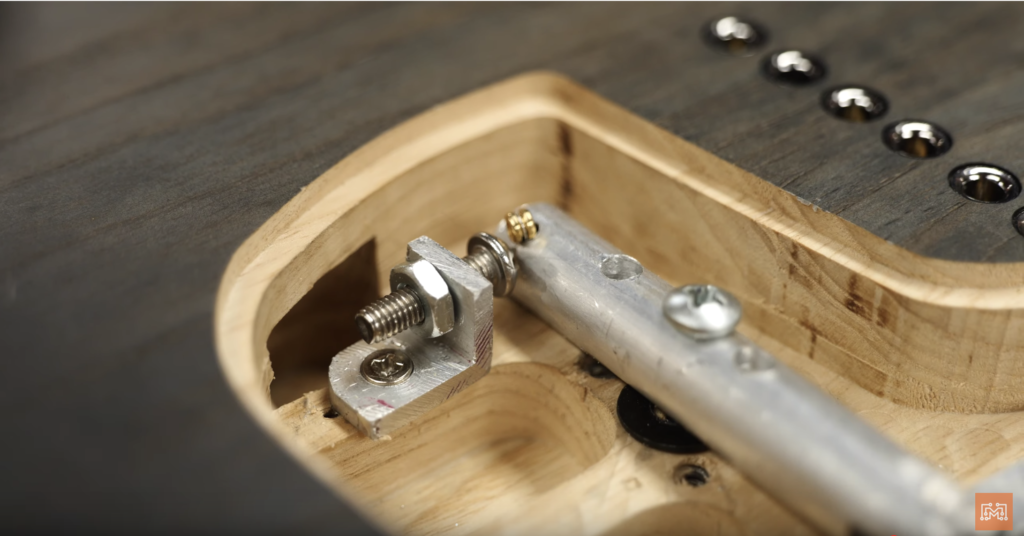 This project was always intended as a collaboration effort with our friend Rob Scallon, an amazing guitar player with a huge YouTube following. Once finished, me and the team drove up to Chicago to deliver the guitar to him. When Rob asked us to make a B Bender, I thought it was something that he had played before. When he saw the acrylic cutout on the back he was so impressed and had a lot of questions. Armed with the mechanical knowledge of how it was supposed to work, he started playing.

It was truly amazing watching Rob figure out how to play this custom instrument. It defied the conventions of traditional guitar playing an in now time, he was making amazing melodies. He was bending harmonics, making custom vibrato sounds with only a single note, and contorting his body around to time the pushing down motion with the beat of a song. I was amazed at how quickly he went from picking up an instrument that was fundamentally different than a traditional guitar to blowing us all away. 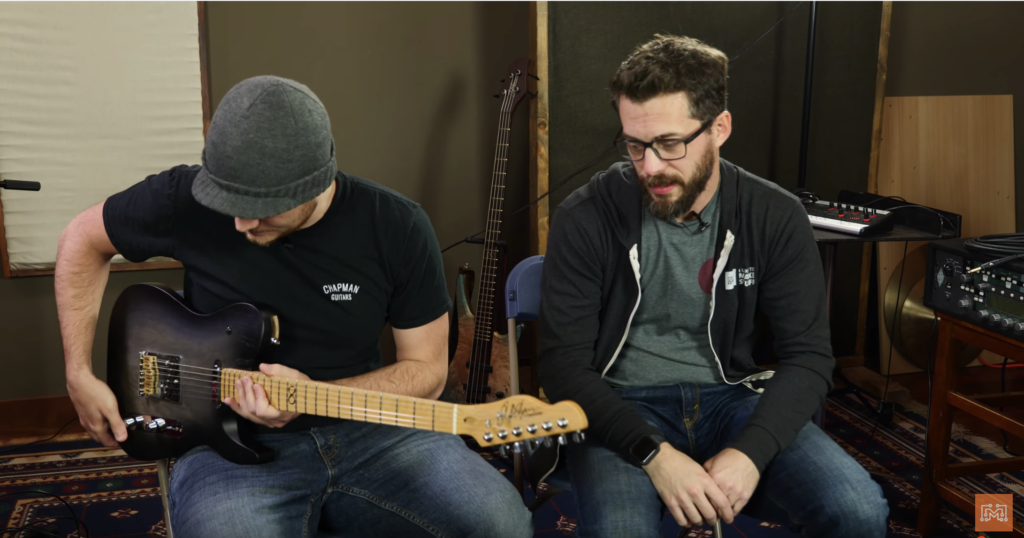 Modifying a Guitar Was Terrifying

I’m really happy that Rob reached out for this custom B Bender project. It sat idle for 2 years while I worked up the courage to cut into the guitar, but watching Rob play something I’e never heard before was truly amazing. This project demonstrates that even though something seems impossible, or you may only have one shot at success, it pays off to create a template and figure out all of the hard work before you ever think about cutting anything.

I’m really glad that I could add to Rob’s list of custom I Like To Make Stuff guitars, first the Shovel Guitar, and now a custom B Bender. I really hope that we can do more collaborations in the future! 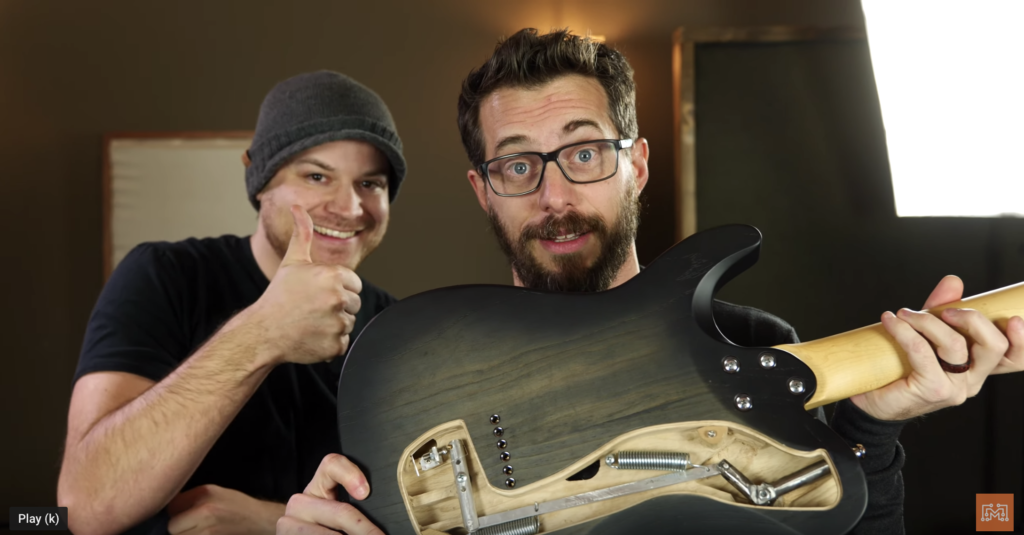