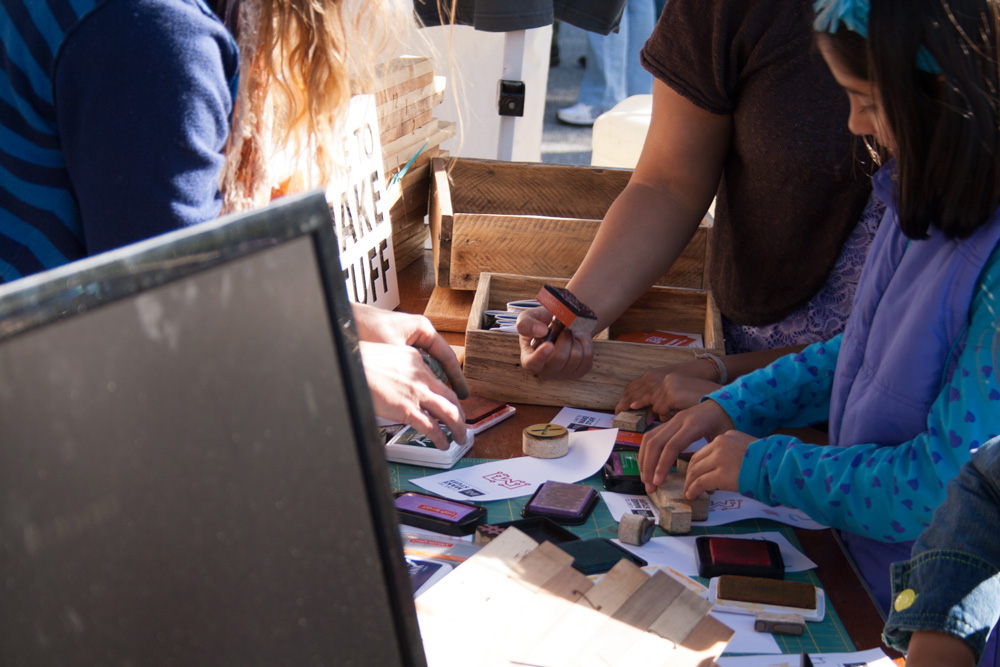 Maker Faire Atlanta was this past weekend and I’m still kind of reeling from it! It was a pretty amazing weekend, and something I will probably never forget. It was a huge gathering of all types of people, doing all types of projects. The weird part of it was.. I barely got to leave my booth.

To step back, I’d gone to the Atlanta Mini Maker Faire in 2013, which was held at the Georgia Tech campus. It was definitely “mini”, but still a pretty cool event. It was held in an outdoor square/commons area on campus, so you could stand pretty much anywhere and see the entire faire.  It was full of hand made items, and 3D printers, as well as drum groups and battle robots.  In fact, I was inspired by a maker that I found there, Linden Longboards, to make my own longboard.  It was a great event, even if it was small enough that you could see everything in about an hour. 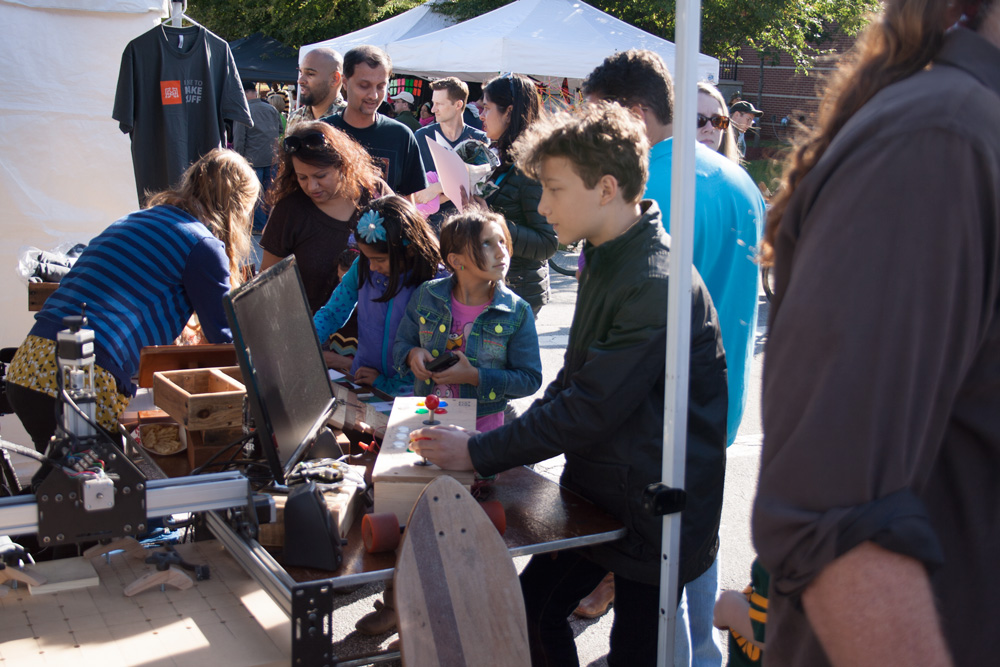 When I heard that the faire was losing it’s “mini” distinction in 2014, and moving to a larger area, I was definitely excited! That meant growth, both in the number of makers, and the number of attendees.. and that made me want to be involved. So, without much thought, I submitted an application to be a maker at the faire.. before even considering what I would show off at my booth.

Over the next couple of months, I made all sorts of plans about what I could show off, things I could make on site, and interactive pieces that people would be interested in. I spent a good deal of time preparing, and got a TON of help from some good friends to make little pocket notebooks, with the intention of selling some and making more onsite as a demonstration. I cut lots of stamps on my CNC machine, and had materials with me to cut more onsite as well. I had plans of gluing up clocks, and engraving pallet coasters, etc. Lots of plans… and NO idea what it’d be like to actually have a booth. 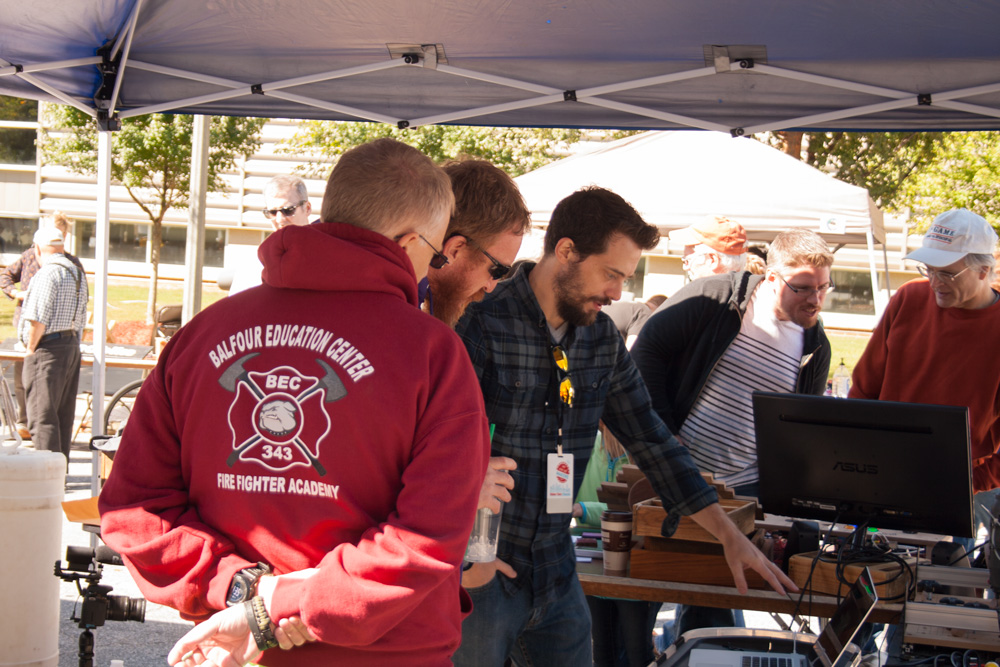 All of this time, my wife had been planning on going with me, helping me in my booth (because she’s an awesome support for me) but when time came, she almost stayed home, due to some sick kids. At the last moment, we decided that I needed her.. and I’m VERY glad that she came along.

The first morning of the Faire, we rolled straight in to our booth to setup. The temperature was unusually cold for early October, so we were underdressed.. and the wind was kind of crazy, so we had a tent that was trying to fly away ever five minutes. In true Maker Faire spirit, some jugs of water and orange duct tape took care of that problem 🙂 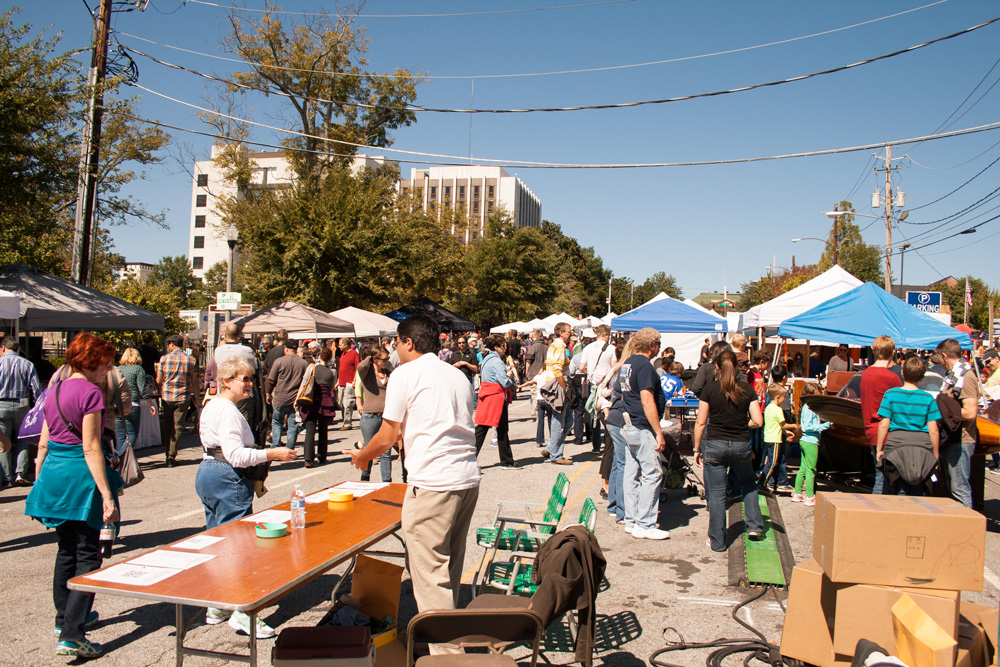 As we started to setup, it hit me. I realized that I wasn’t sure that should even be there, with a booth. It sounds weird, since I call myself, and am considered by others.. “a maker”. Most makers that get a booth at Maker Faire have ONE project that they’re showing off. I have TONS, and they really don’t have anything to do with each other.

This was immediately obvious when the volunteers would walk up, look at my table full of clocks, a longboard, and arcade machine, a CNC machine, stamps, and bookmaking materials. They would look over everything, then say “Sooooo… what do you do exactly?” in the nicest way possible. This continued for the entire weekend, but pretty quickly I was able to change my answer from “well, I make all sorts of stuff….” to “I make free how-to content on my website, and all of these things are the product of me being able to teach people how to make stuff.” That felt MUCH better. 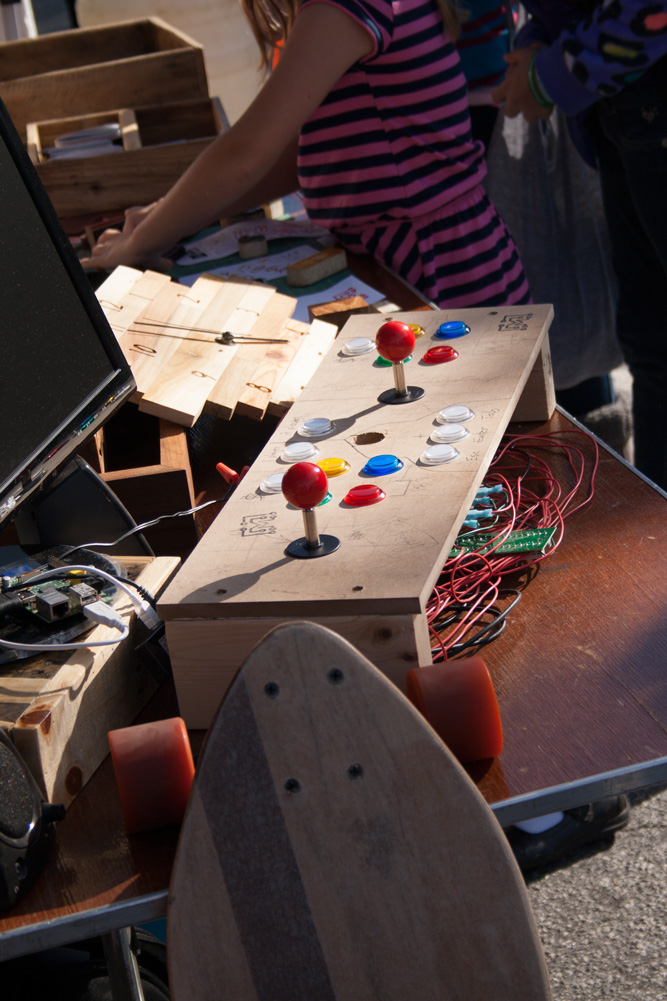 As soon as the faire opened on Saturday, attendees flooded in. The crowd grew very quickly, and (at least at my booth) was consistently big for the ENTIRE day! I’ve heard from the organizers that they expected 20,000 people.. but actually had 30,000 ! That’s BIG. It turned out to be the biggest Maker Faire outside of the New York and San Francisco events!

Throughout the days, I was in constant conversation with people who’d see something on the table that interested them, which mostly was my Raspberry Pi arcade, or my CNC machine. Tons of kids stopped by to play the arcade, and most of the parents weren’t too upset when they saw their kids playing Super Mario Brothers, Qubert and other vintage games.

I almost felt like I was selling the ShapeOko CNC mill, giving sales pitch after sales pitch. The fact was, I am a big proponent of that machine and it’s seller, Inventables, so I didn’t mind going over it again and again. I had precut a bunch of pallet slats down to 4″ sq blocks (as coasters), and was able to quickly engrave names or designs on them, and give them away. People loved seeing the machine working, and every time I turned it on, the noise would IMMEDIATELY draw a crowd of 10-15 people… over and over. Kids really enjoyed being able to walk away with a coaster with their name on it. 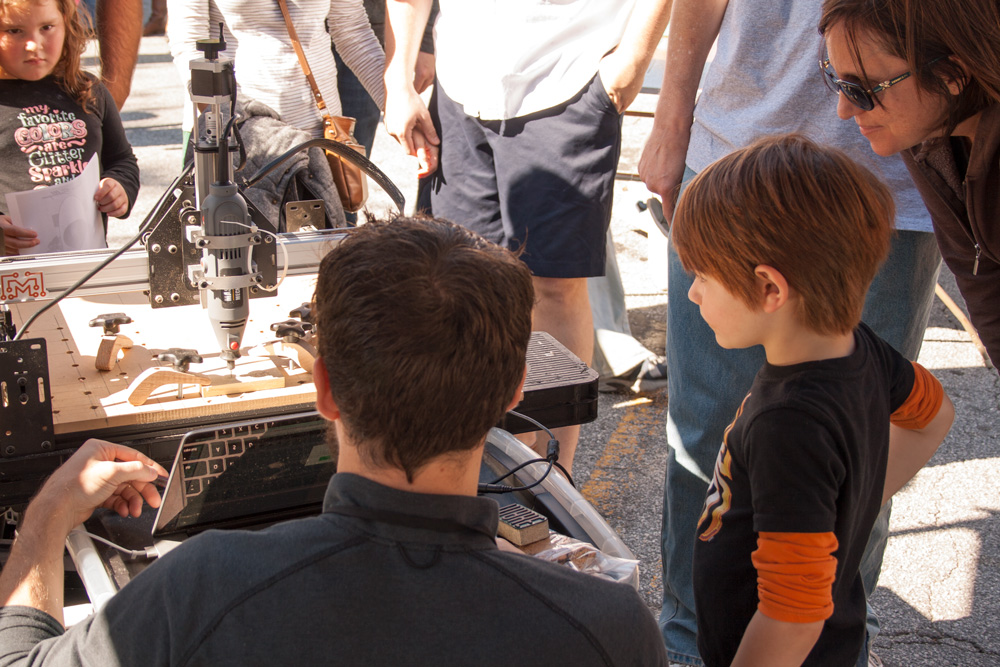 I even had one kid come over, and when I asked him name, he said “make it say Dad.. he’s over there and I want to surprise him.” This made me really happy, and I know made his dad happy as well.

So, while I tended the CNC, and explained how the arcade was put together, my lovely wife spent two days selling my shirts, stickers, notebooks, manning the stamps and helping kids use them. She explained to people what I did, while I was in conversations (most of the days), she fielded questions and took down phone numbers. She even had to deal with a couple of crazy people, I found out later.

She did all of that and more, with grace and ease. Never complaining once, never tiring. She’s awesome…. seriously, you guys have no idea.

She’s not the only support I had either! I had several friends travel TO Atlanta to see me and the faire. I had friends from different parts of Atlanta come by, buy us lunch, and generally take care of us. My parents even came down from Kentucky! Speaking of, most of these pictures were taken by my Dad! Thanks Dad!

Plus, I got to meet lots of my YouTube audience! Having people tell you that what you’re doing inspires them to make things is truly amazing, and I really appreciate them (AND YOU) for making the effort to follow what I do and give me feedback!! 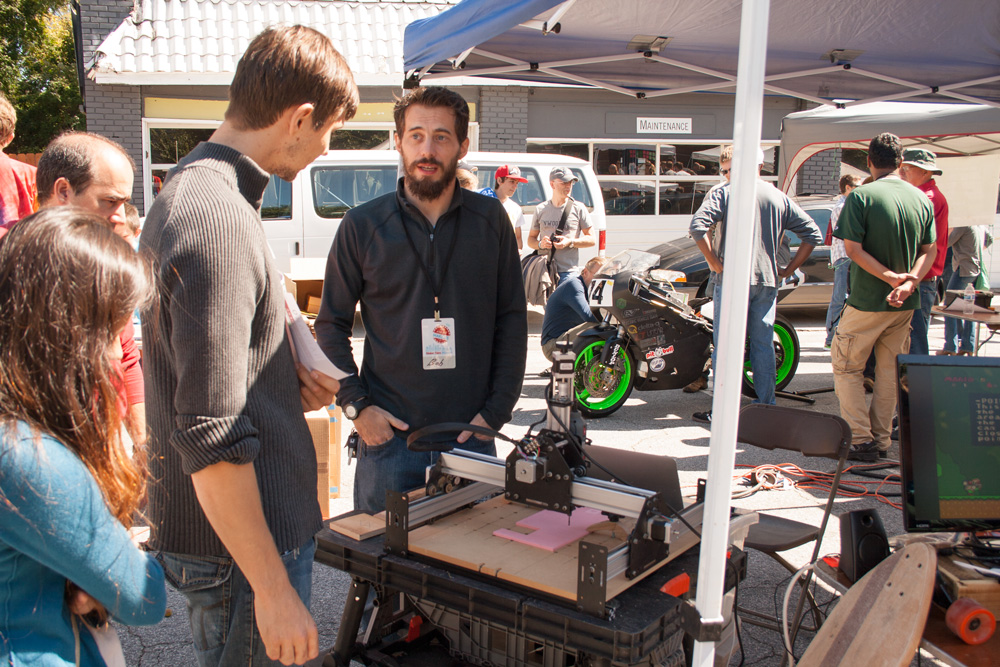 My only wish was that I’d gotten more of a chance to walk around and see all of the other booths, because from what little I saw, and what I heard, there was some amazing stuff! There was a huge section for kids, there were robots, blacksmiths, rockets, go carts and much, much more.

I hope that you’ll get a chance to visit Maker Faire near you soon (there are mini maker faires all over now!) and eventually get to be apart of one of the larger ones! It’s an amazing place to be inspired and connect with likeminded people, and I will DEFINITELY be back next year!

Special thanks to the whole crew at Maker Faire Atlanta for putting together a great event, and of course to my amazing wife for everything she does!!

Here are some other articles about the event that I’ve come across. I’ll continue to add them as I find them.