How to Make A Wall Organizer

By Josh PriceJanuary 9, 2020Projects
No Comments

A while back I made some really nice writing desks for my three boys, but I discovered that they need a wall organizer. In this project we’re going to create s simple wall hanger that help organize their stuff.

The frame for the wall organizer is made from some simple 1×2, pre-primed pine lumber I found at Lowe’s. Using the measurement from the kids’ desk top, I cut the frame pieces on the miter saw at 45 degree angles. I used glue and brad nails to connect the pieces together. Alone, this joint may not be that strong, but the interior panels will be glued in place and will add strength and support to the whole unit.

To divide the wall organizer into two separate sections I added a 1×2 divider using some glue and pocket screws. I now had a simple rectangular frame, but because we want panels to sit in those openings I added a 1/4″ rabbet to the back. The depth of those rabbets was based on the material being put in those spaces; one side had a piece of 26 gauge sheet metal and a thin luan backer, the other side was just a piece of luan. Next, we need to cut down these sheets and added them to the frame. 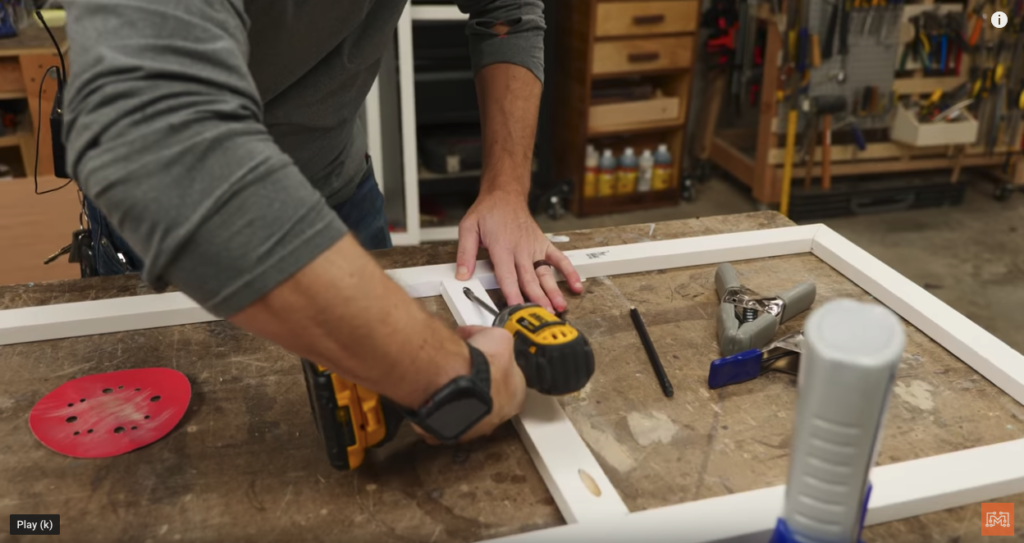 Like I previously mentioned, we have to cut down the sheets to fit the open frame spaces. I used an angle grinder to cut the sheet of metal I purchased from Lowe’s. I matched this size with a sheet of 1/8″ luan and cut a second one for the other open space, matching those dimensions. When you use a rabbetting bit, it leave a circular cut in the wood. You absolutely could use a chisel and square up those rounded cuts so the square sheets would just drop in. In this case, I am making three of these wall organizers, so it is actually quicker to just use a sander and round the corners of the sheets to fit into the rounded rabbets.

I used some spray adhesive to affix the metal sheet to the luan backer and glued the panel into the larger frame opening. The remaining sheet of luan was glued into the smaller space. This sheet will serve as the backer for the french cleat system that we’ll install later. 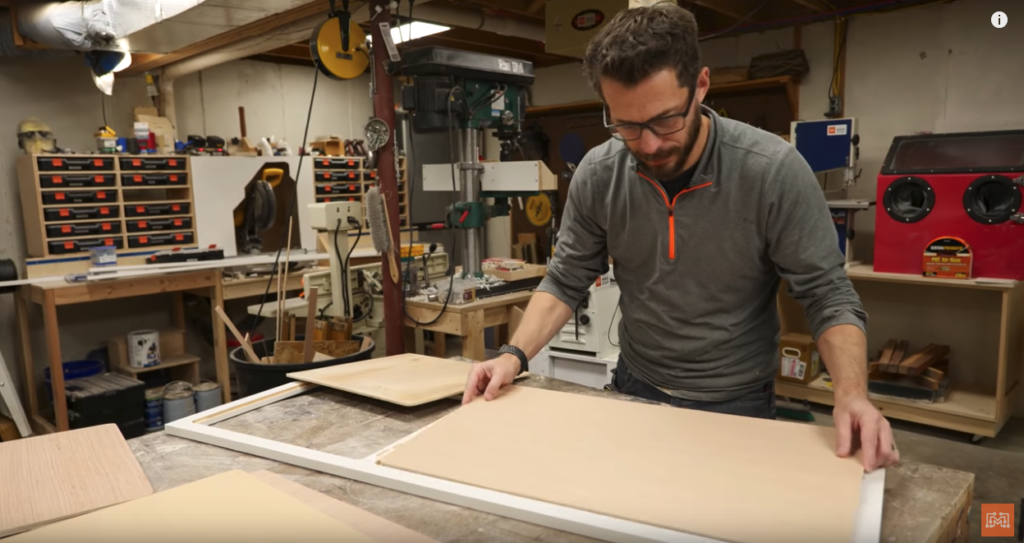 If you just wanted a wall organizer for an entry way or another space that necessitates a flat unit, then you could stop here. Because these are going over our kids’ desks, I wanted to add an additional shelf with a light mounted underneath. Because the organizers are 42 inches wide, I wanted to use material that was thicker than common 3/4″. A rule of thumb is that if a 3/4″ shelf is longer than 36 inches, it needs to be supported in the center. At Lowe’s, I found some prefab pine stair treads that are 1 inch thick. I cut these planks down to size and used the cutoff to act as a front lip to hid the LED light strip.

To add support to the front of the shelf, I traced out some diagonal braces and cut them out of the 1×2 material I used for the frame. Using some glue and screws, I attached the shelf and the braces to the top of the frame and added the LED light strip to the underside. I then painted the whole assembly white, added some metal flush-mounted hangers to the back, and began the process of adding the french cleats. 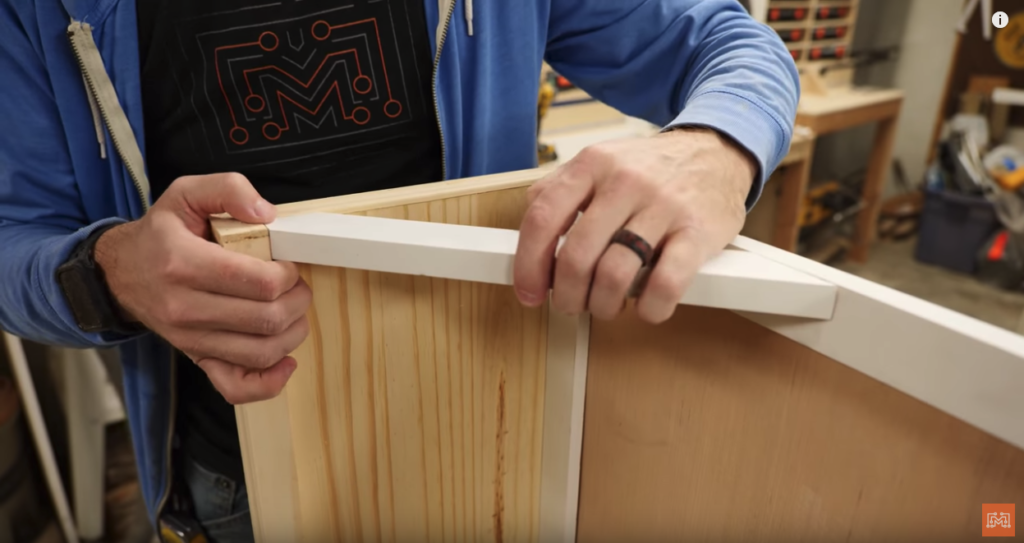 Beside the magnetic panel, I wanted to give the kids some mini shelves they could arrange and perhaps a way to add pencil cups or other specialized items. The best way I know to add this capability was a french cleat system. You accomplish this by taking a strip of lumber, ripping it down at a 45 degree bevel and using the two separated pieces to nest together. One piece is attached to the smaller frame opening and backer sheet while the other piece is attached to the mini shelf. The shelf can them be moved and locked into another cleat on the frame. I gave each wall organizer 5 cleats on the frame and two small shelves that the kids could move around. 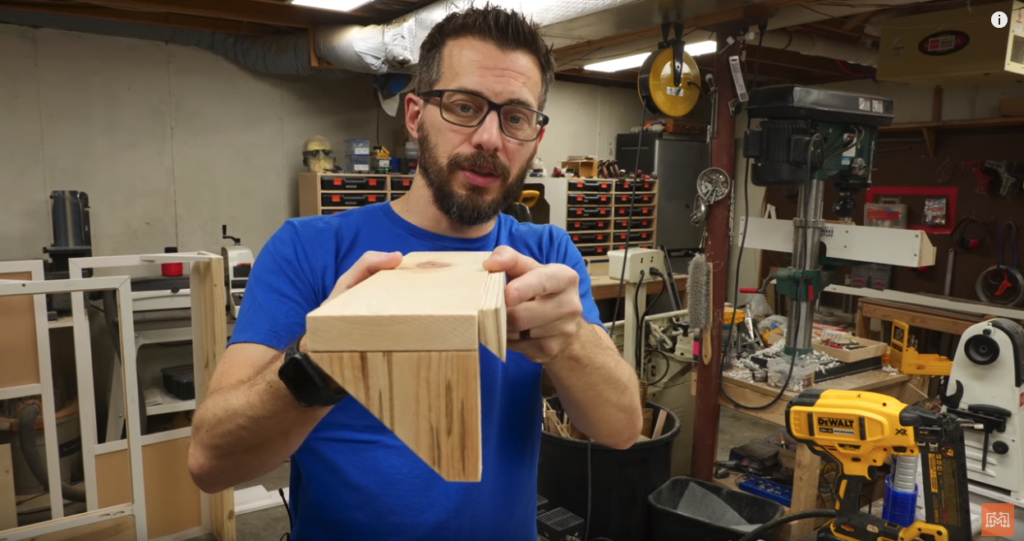 In conclusion, this wall organizer is simple, customizable, and works great! The original idea was to clear up clutter on the kids’ desktops, furthermore you could use this as an entryway item, a shop fixture, a calendar unit or any other area that is need of organizing. Using the wall to hang the unit clears up precious floor space and puts your items at eye level for easy use. If you’re interested in making one for yourself, or if you’d like to build one of the desks, we have plans available below! 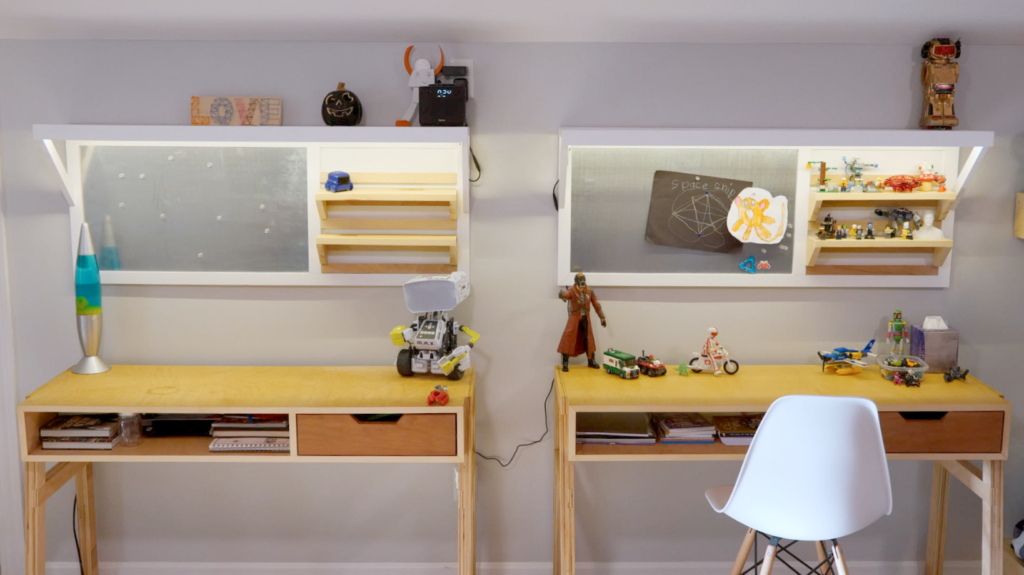