How to Make a Treehouse Part 2

In the second part of the Treehouse build, we will be finishing it up by adding a safety railing, a ladder, a slide, and a pulley system! Come check out the finished product in part 2 of the How to Build a Treehouse series!

There are many ways that the kids could get up into the treehouse. We brainstormed tons of options like a trap door, a rope ladder, even a prefabbed attic ladder that could fold up into the deck from underneath. The most accessible and most practical would be a simple wooden framed ladder with some steel pipe captured inside of it. To do this, I cut some 4×4 posts so that they would be flush with the top platform and drilled some holes on the inside faces so that we can insert some 1 inch steel pipes.

This ladder was positioned on the front face of the treehouse which was structurally great because there were a lot of attachment points, but it did leave some spaces that your foot would hit the platform. We could have moved the ladder to the side of the platform and this wouldn’t have been such an issue and grown-ups could climb the ladder more comfortably. 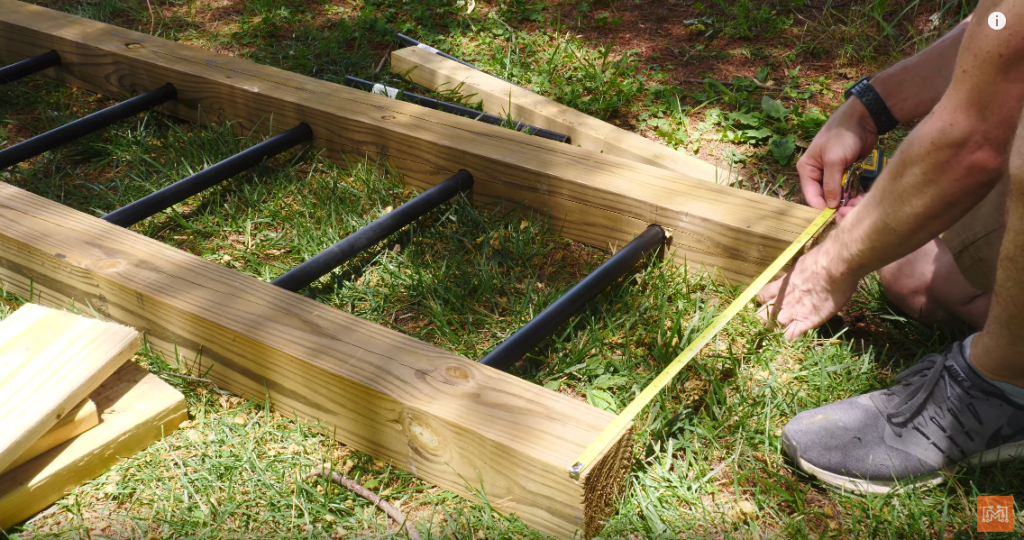 To keep the kids from randomly falling off the treehouse platform, I went to Lowe’s (who is sponsoring this project) and found some pre-built sections of deck balusters. This was an awesome solution because there were already made and the vertical posts were spaced to code. Josh and I attached some more 4×4 upright posts to the deck platform and hung the railing sections between them. 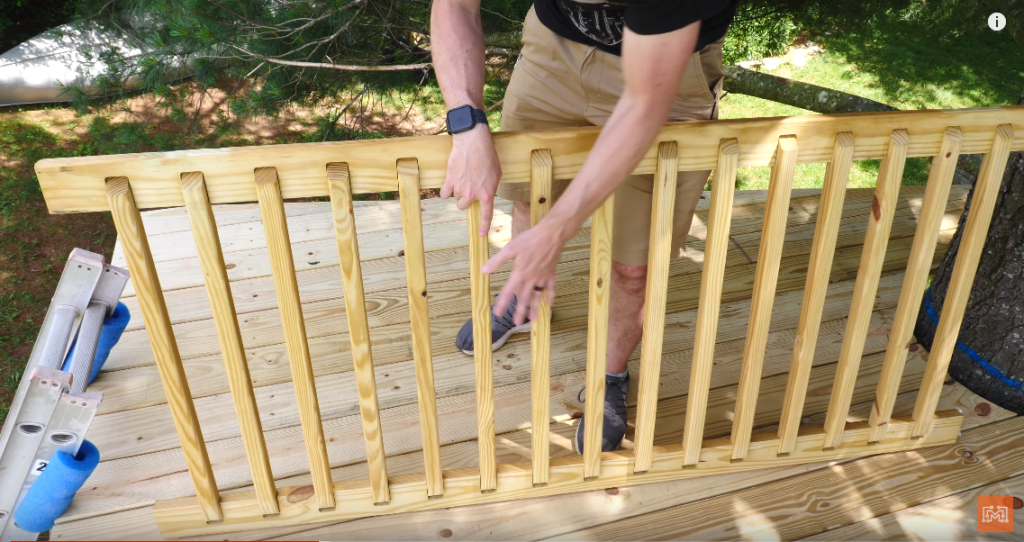 Some sections of the railing had to be disassembled and modified so that we could fit them around some of the existing tree limbs. We didn’t want to arbitrarily cut off healthy tree limbs, so we made some slight adjustments to the railings to fit around them. I think it really solidifies the treehouse feel by wrapping the structure around the elements of the tree. 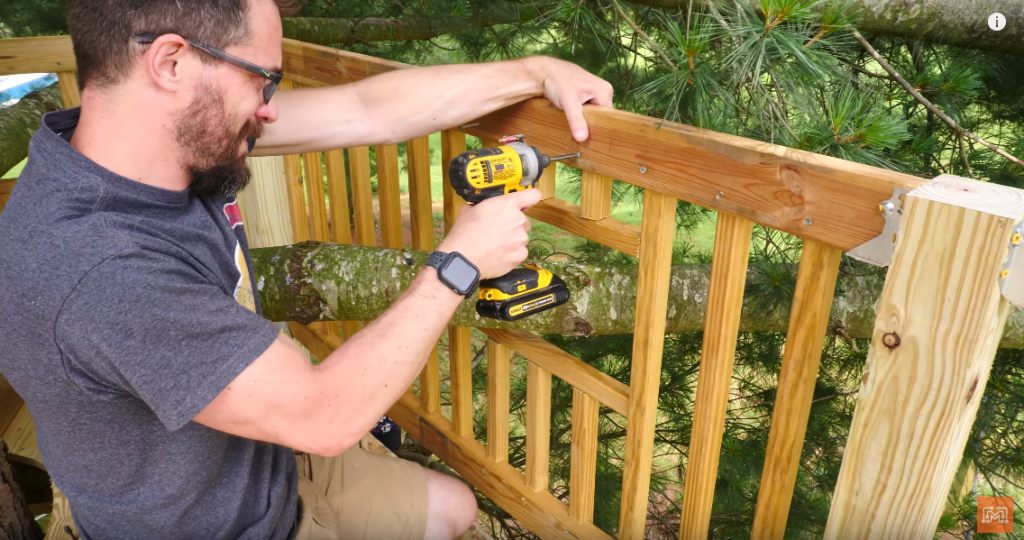 To get supplies, toys, or anything else up into the tree, we devised a simple pulley system that the kids could use. To do this, I tied a small pulley to one of the branches at the rear of the treehouse above the platform. Then we clipped a bucket to the end of the rope using a caribeener. On the railing, we attached a small cleat so the the kids could tied off the rope when the bucket was pulled to the top. My kids love reading books up in our backyard trees, so I know they will use this feature a lot. 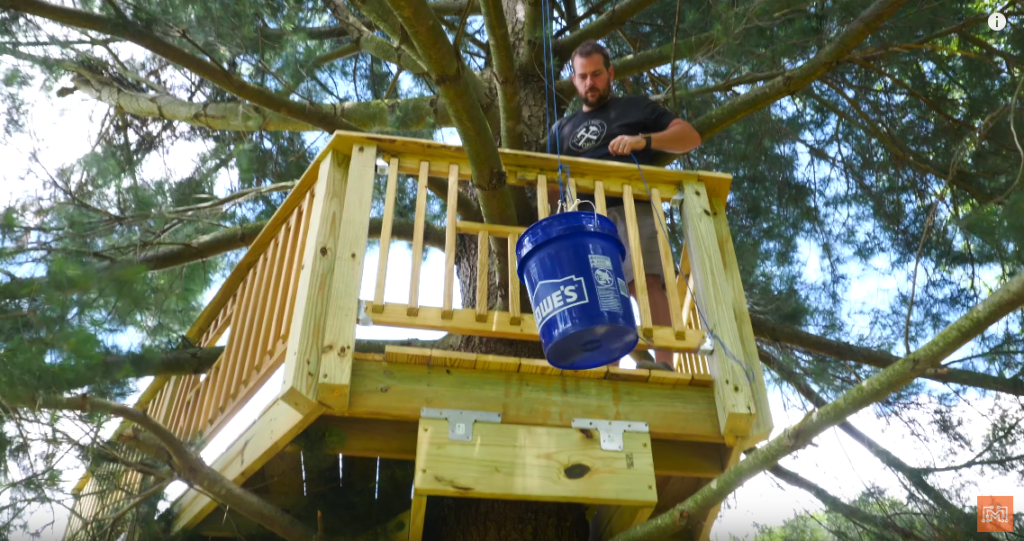 The last element of the treehouse was a slide. I went on Lowes.com and found a lot of playground equipment, but non would fit our platform height. So as we do, I decided to make a slide from materials I could easily find at our local Lowe’s. The side rails would be made out of 2x10s with some extra 2x material pocket holed between them. On top of these supports, we laid down a piece of pressure treated plywood on which we put some aluminum flashing. 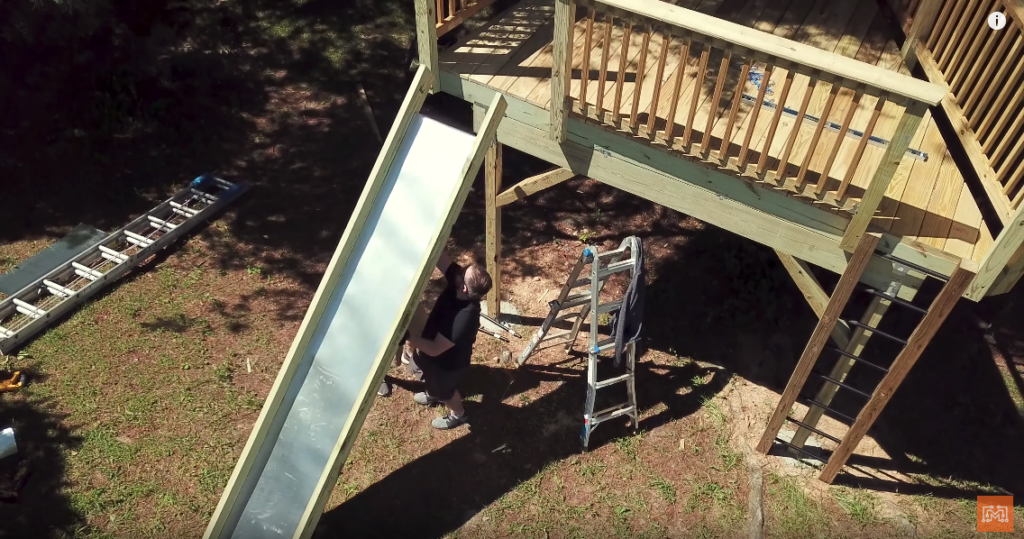 The Treehouse is All Done!

It is truly amazing to see the treehouse in its final form. I have been dreaming about this project for a while and I know my kids are super excited. When we bought this house, I would stare at that tree in our yard and think about how cool it would be to put a treehouse up there. We have been planning and building this project for about two months, making sure that we are building elements on top of strong and long-last pieces.

I am very happy with how the treehouse turned out and I have no doubts that my kids’ kids will be playing on it some day. Again, thank you to Lowe’s for sponsoring this project and helping us make this treehouse a reality. 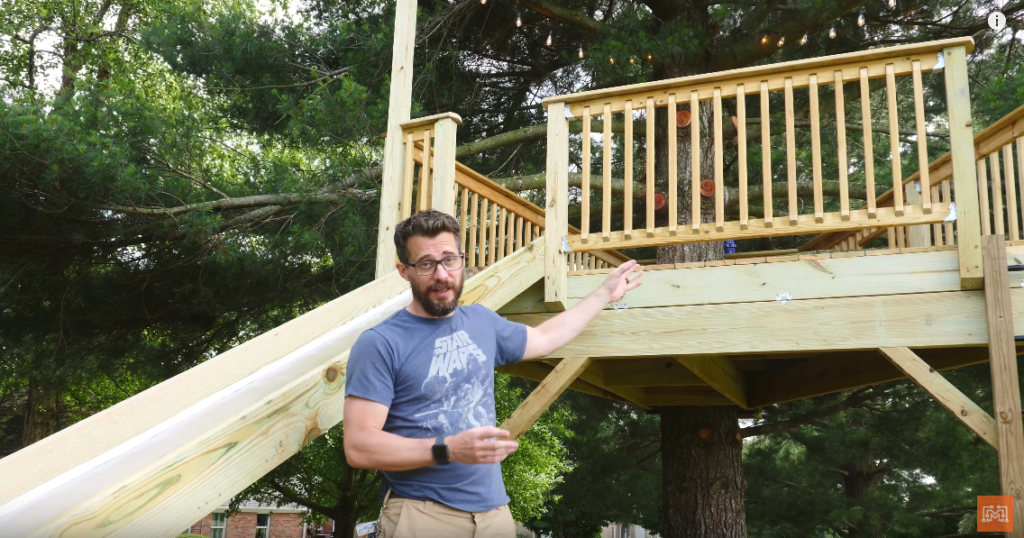