My family LOVES superhero movies, specifically the new Avengers: Endgame from Marvel Studios. My daughter and I really love Ironman, so I decided to make a lighted marquee sign to display the heart-warming message that Tony Stark shares with his daughter; I Love You 3000.

This marquee sign is constructed quite simply. It is made of two MDF boxes, one sits on top of the backer board and the other acts as a frame around it. The first box will hold a sheet of frosted acrylic, so I added a dado on the inside those pieces before they were assembled. I used my table saw to cut these pieces, glued the separate boxes together, and used brad nails to secure them. The box that holds the acrylic only had three sides glued together so I could slide in the acrylic. 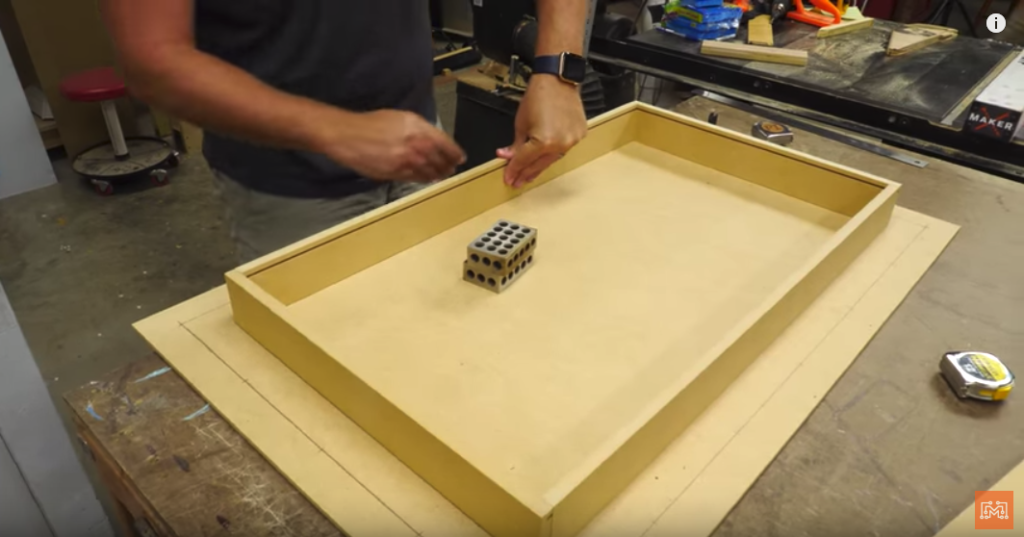 Our intention was to paint the box in an Ironman color scheme. The inner box needed to have a yellow face, but as many of you know, painting MDF edges looks bad. To fix this, I use Weldbond to coat the MDF edges so they hold paint better and it looked great. Once these two boxes were painted, they could be assembled to the backer board. 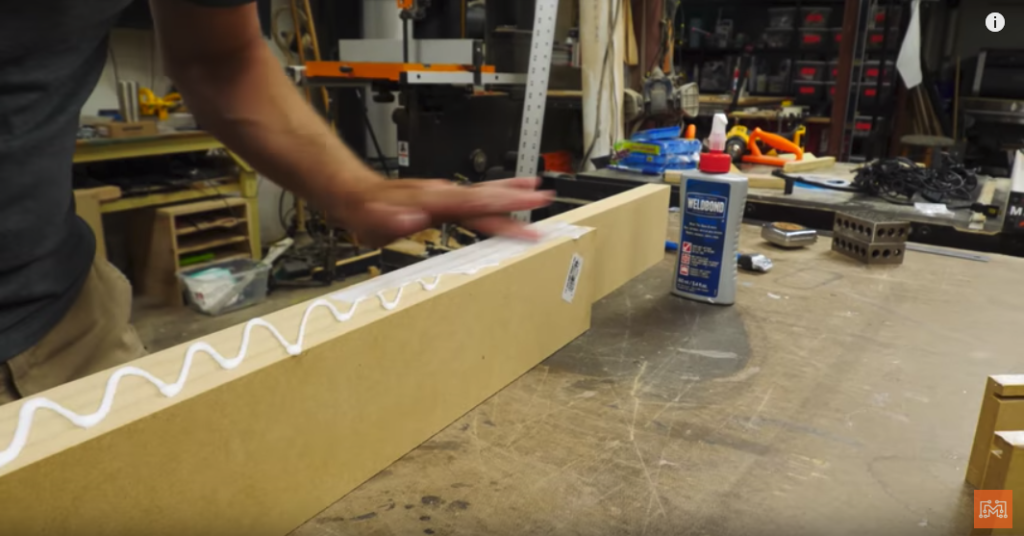 2. Drill Holes in the Backer Board

Josh measured out the spacing for the marquee bulbs and used the drill press to drill those holes. I then glued and nailed the inner box on the backer board face and the outer box to the board’s edges. To make room for a french cleat on the back of the sign, I added some 1/2″ spacers to the backer board to raise it off the worktable before securing the outer box. 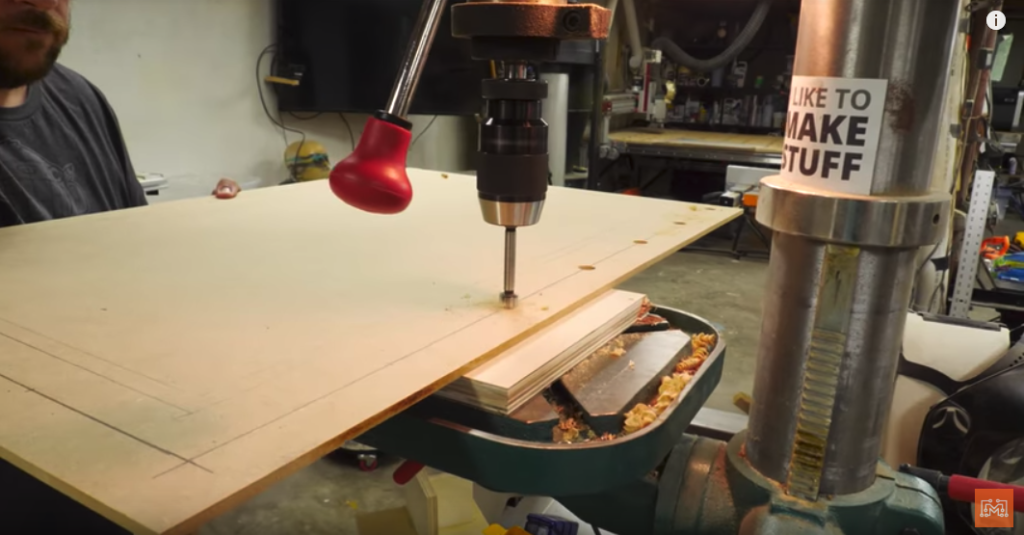 To continue with the paint scheme, I wanted to paint the space between the two boxes (where the bulbs will sit) a vibrant red. Furthermore, to prevent bleed-over, I masked off the yellow edges and used some spray paint to add the Ironman red. 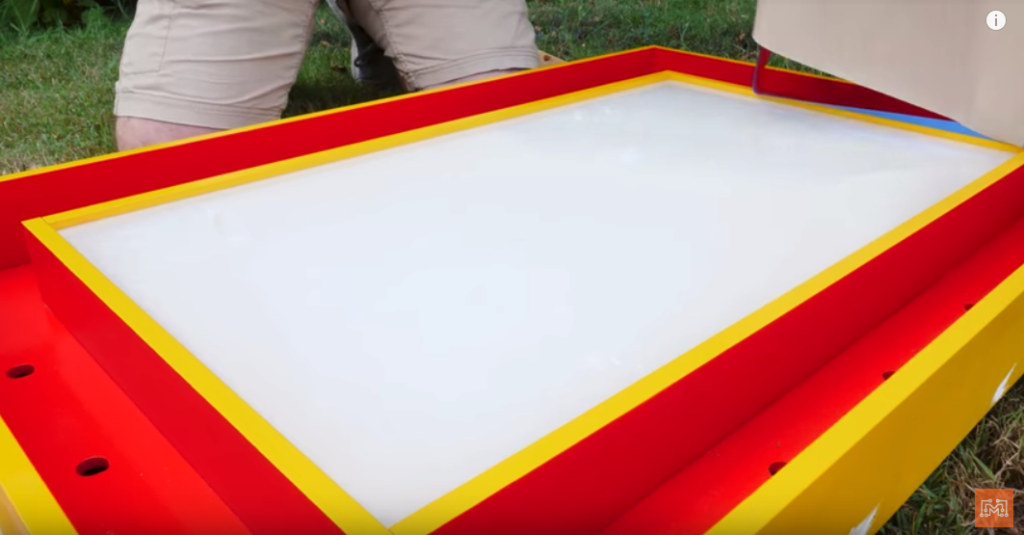 Now what kind of marquee sign would this be without some bold lights? I bought some bulb lights on Amazon and discovered that you can pop off the end of the socket and remove the wire. This is important because the holes Josh drilled were made to friction fit the sockets in place so the bulbs would show on the front. We pressed in all of the sockets into the backer board and reattached the wire through them all on the back. 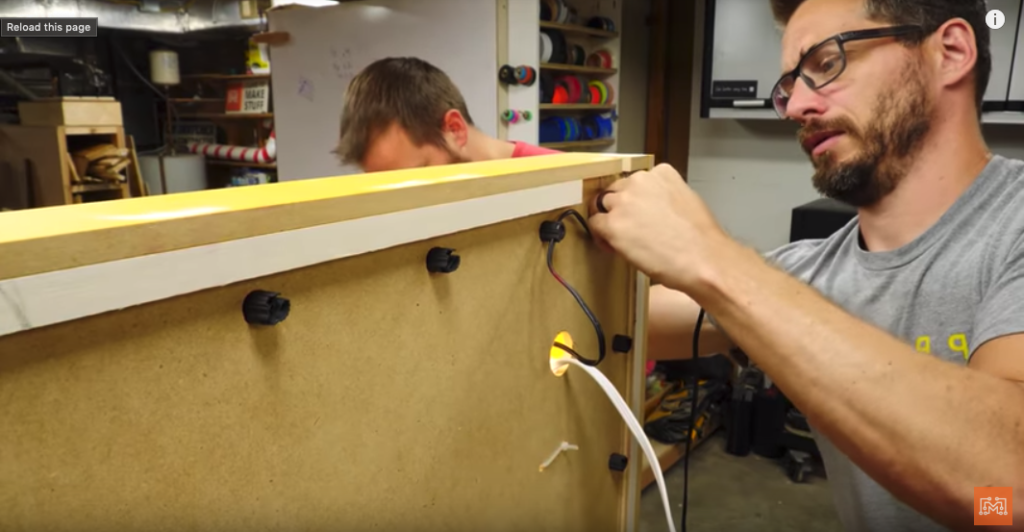 To backlight the frosted acrylic on the front where the letter will go, Anthony came up with the idea to use two under-cabinet LED light strips mounted to the inside of the inner box. The two lights will point to the center of the box to create an even light distribution. All of the sign’s lights were connected to an extension cord and hidden away. 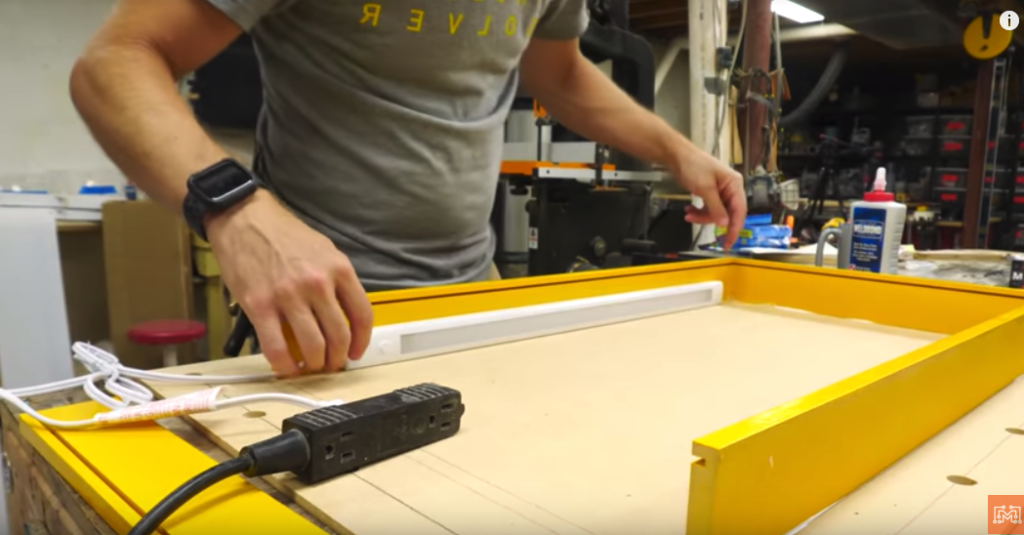 The heart and soul of this project is the ability to place messages against the backlight face, to do this, I used frosted acrylic to diffuse the light from the strips. The letters that make up the message were cut out of black vinyl and applied to plates of thinner acrylic. These letter plates need to slide into some acrylic tracks, adhered to the frosted acrylic face with solvent. 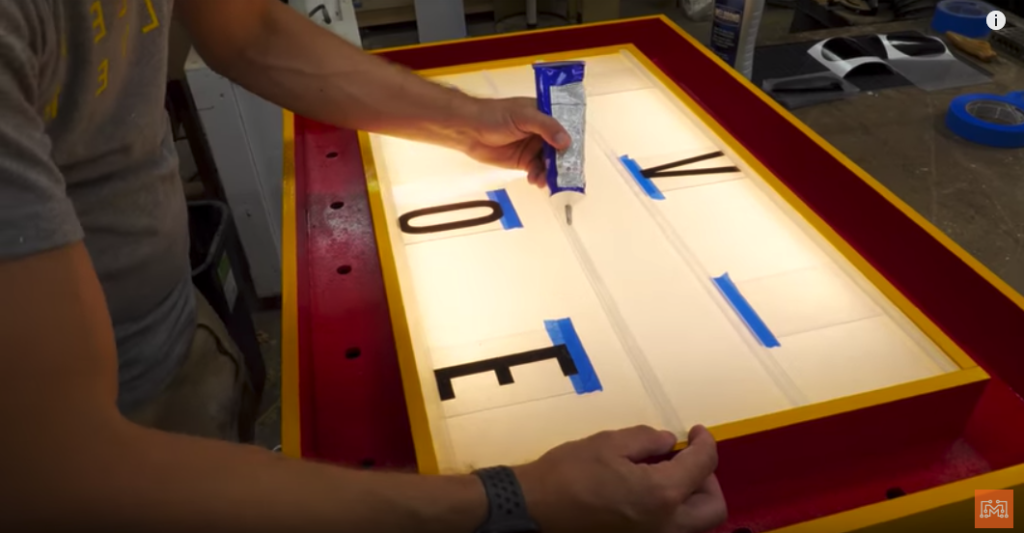 The tracks were made of two layers of thin acrylic strips adhered together. Two acrylic layers were offset from each other to leave an 1/8″ overhang so that the letter plates could slide inside them. The plates had a bit of flex so they could be cupped and slid inside the tracks where they could slide freely. I made enough letter plates to spell out Morgan Stark’s message to Tony, “I Love You 300.” 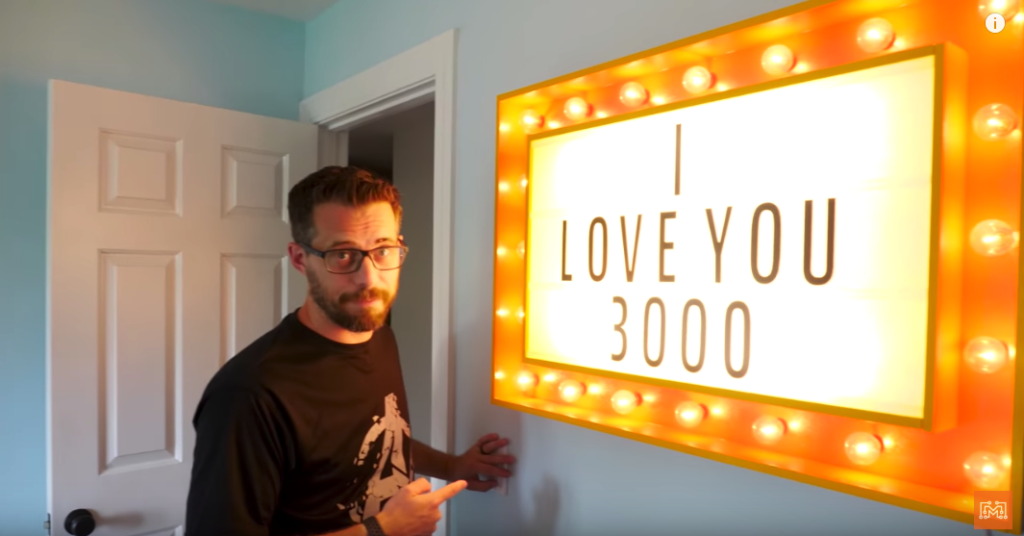 I painted the outside of the marquee sign black and glued in the french cleat on the back. It was all ready to hang on my daughter’s wall. She happened to have a light socket that was controlled by a light switch, so I hung the sign on that wall. When she got home, I flipped the switch and the marquee lit up beautifully. She really loved the message and the fact that she could add her own message to the sign later if she wanted.

In conclusion, I’d like to thank Marvel Studios’ Avengers: Endgame for sponsoring this project and for making a movie that my entire family loves. You can watch the movie with your family too, it’s now available on Digital & Blu-ray! If you want to make one of these for yourself, we have plans available below! 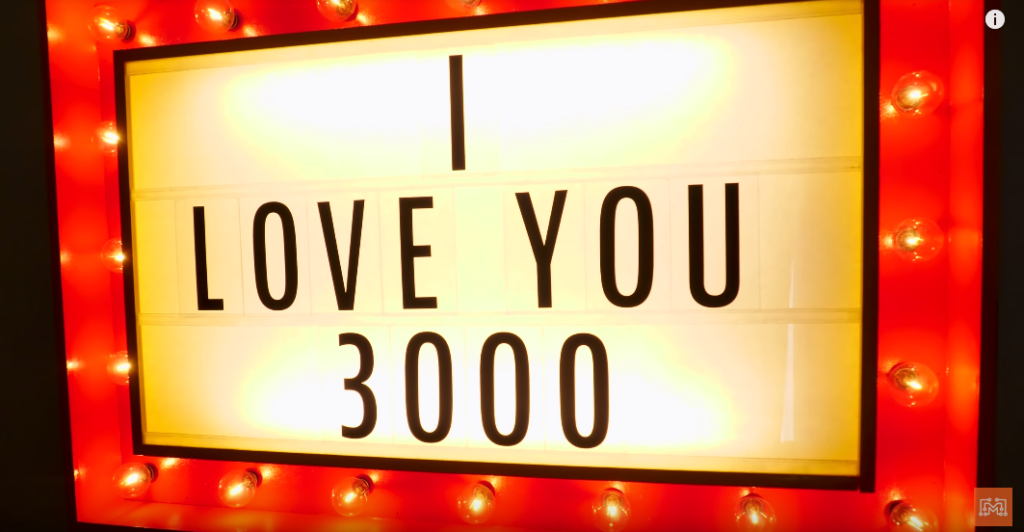 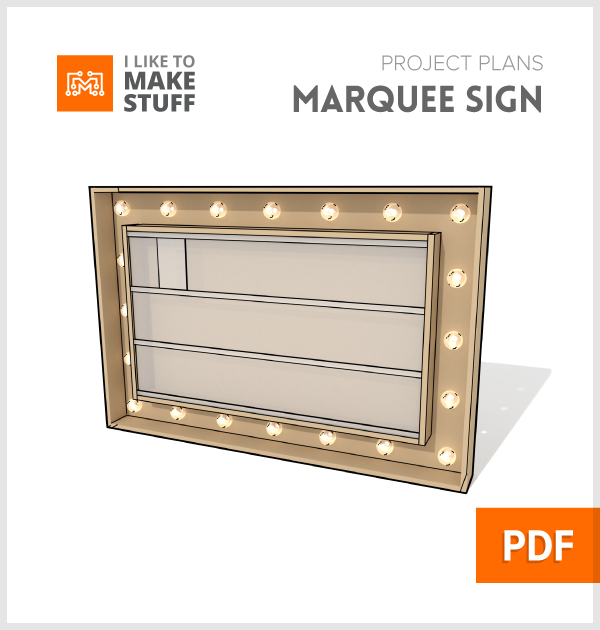