How to Make a Langstroth Beehive

In this project, we’re going to be making a Langstroth Beehive to relocate a colony of bees living inside the walls of our back porch. I’ve reached out to our local beekeeping community for help with this one to make sure that we don’t harm any bees and so we can maintain a sustainable colony in the future.

I’m not saying this as a disclaimer, well maybe, but I really think the success of this project was largely in part from the advice from our local beekeeping community. I looked up the group on Facebook and the leader, Richie, came out to check on our bee situation. A lot of people have a general fear of bees, but I didn’t want to unnecessarily harm the creatures in any way. Richie suggested that we remove the wall panel and carefully remove any honey comb that the bess had made and transfer them to a Langstroth Beehive. There are many beehive designs, but the Langstroth is very versatile and can grow as the colony grows.

I found some plans online to make a standard Langstroth hive, and I used Google Images to research different hive ideas. My favorite was a Langstroth made out of cedar with a simple metal roof, so I decided to emulate it. Once we finished the hive, Richie planned on coming back to help me move the hive into their new home. 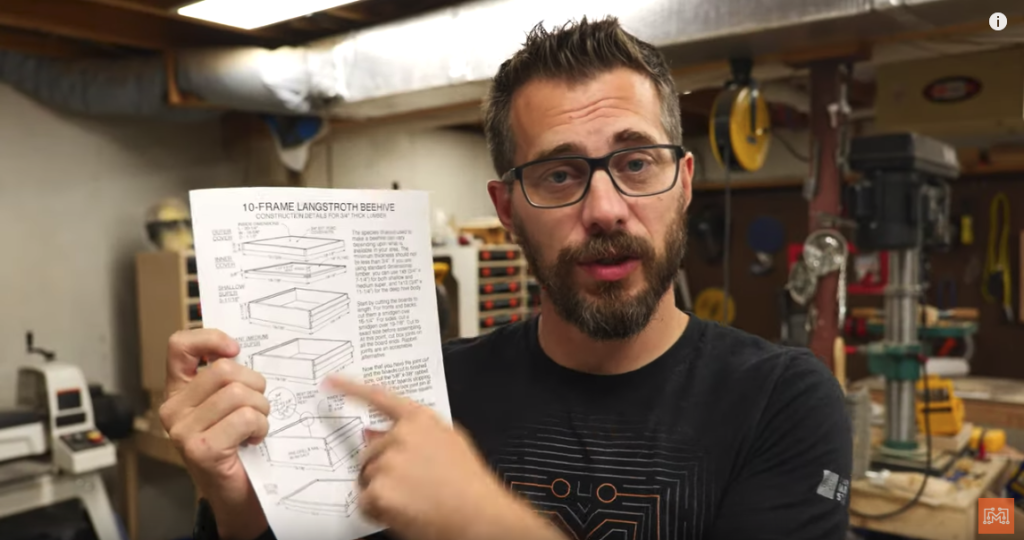 If you aren’t familiar with beehives, let me fill you in, specifically the Langstroth hive. It is a system of boxes, some deep and some shallow, that stack on top of each other. The bees brood, or incubate and hatch new bees, in the deeper, lower boxes while the workers bees store honey in the shallower, upper boxes. There is a base with a landing pad and two separate lids that cap the whole hive.

To make the deep and shallow boxes, I cut up some cedar boards and joined them using box joints. Because I’m not sure how many bees are living in the wall, I’m going to make enough boxes for 2 hives. Once the boxes were glued together, I used a router to add a rabbet on the top so that the individual beehive frames will hang inside the boxes. 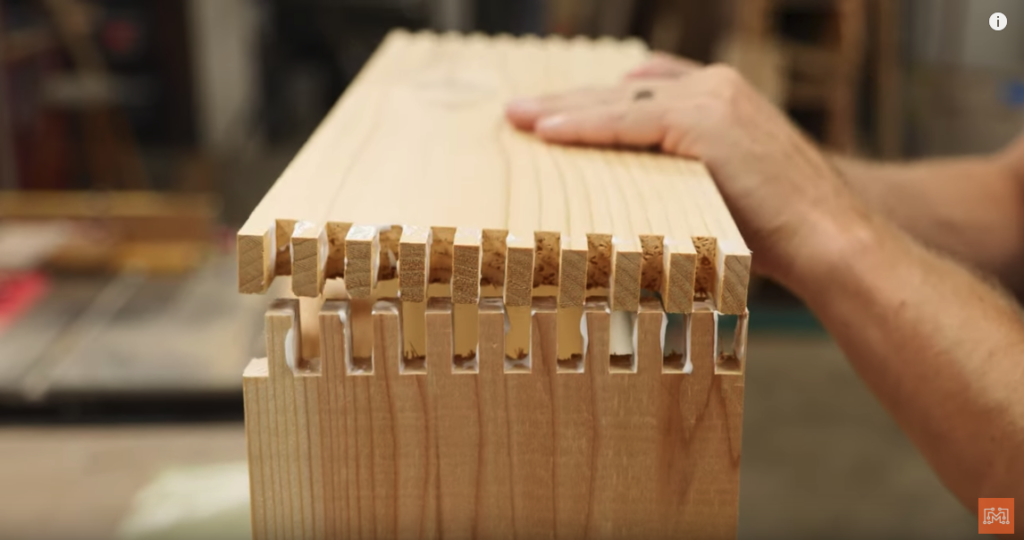 The bees need places to build their comb, not just attach it to the insides of the boxes. The Langstroth hive uses thin, empty frames slotted closely together inside the boxes to give the bees a place to build out the colony. The spacing is very specific so that the bees don’t instinctually fill in small gaps with a secreted resin-like material and close in the colony. The individual frames can be pulled out of the boxes and the honey from their comb can be harvested without disrupting the rest of the hive.

To make the frames, I cut the top and bottom rails from more cedar lumber and Josh used the laser cutter to make the outside vertical supports. These vertical supports needed to be cut with the specific spacing added to each side. When two frames are placed next to each other, it needs to be no less than 3/8″. After a long batching process using jigs, glue, and brad nails, we had enough uprights to complete all of the frames for each box. To help support any existing honeycomb, I ran some fishing line along the frame. 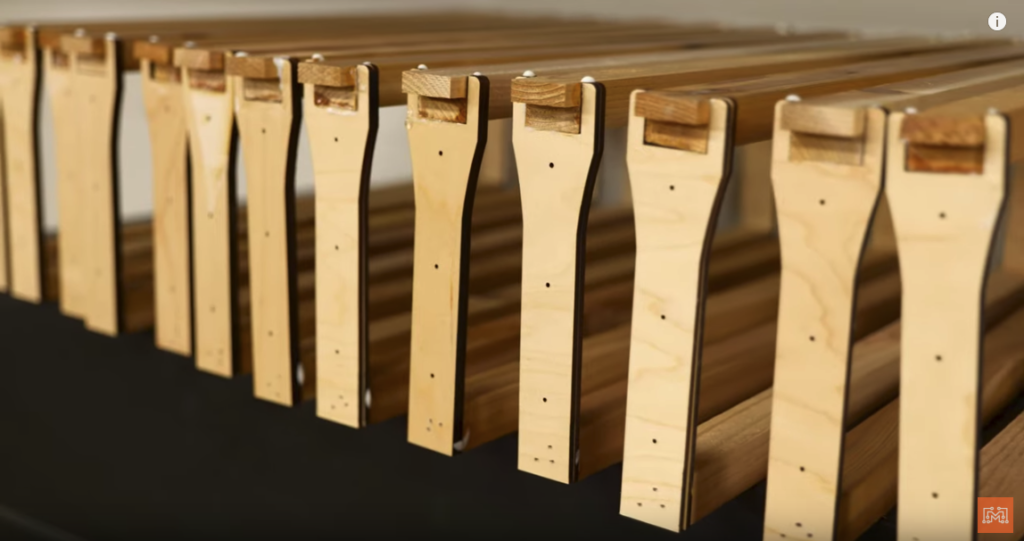 Now that the boxes and frames are complete, we have to add the remaining elements to the Langstroth hive, both of which are integral to the success of the system. The bottom acts as a barrier for other creatures, only allowing a 3/8″ opening; a landing pad to enter the hive; and a way to catch all of the bee’s waste. This was created using a cedar frame with dados cut along the inside to accept a sheet of corrugated plastic that could be removed and cleaned. On top of the plastic sheet, I stapled down a sheet of screen door mesh and secured it in place with a 3/8″ vertical spacer. The entire hive simply sits on this base, which then is elevated by some cinder blocks. 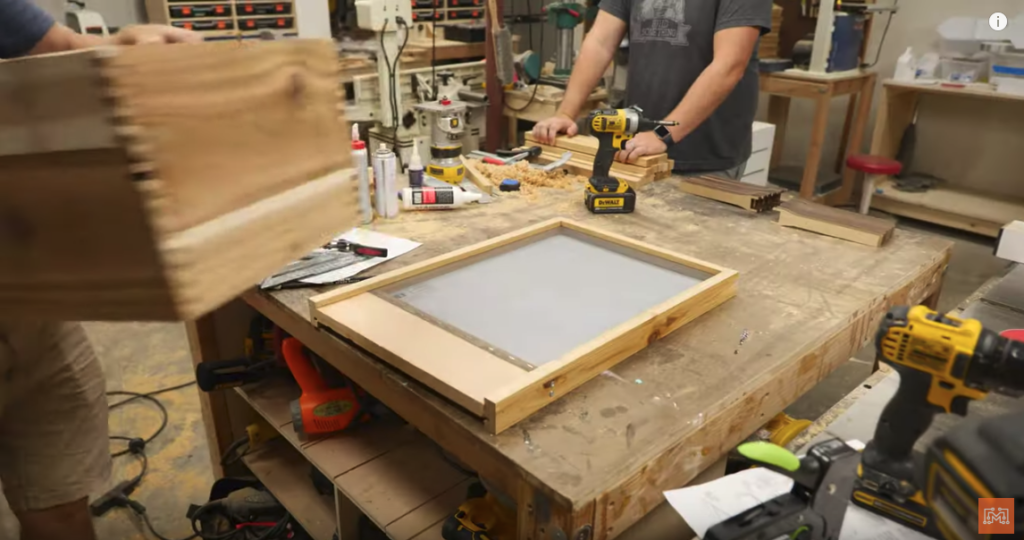 The hive’s lid is a 2-part system consisting of an inner and an outer cover. The inner cover is a thin cedar and plywood ceiling panel that matches the dimensions of the boxes. This panel has a hole cut in the middle to act as an opening for the bees to enter this attic-like space to feed on sugar water from a feeder. The outer cover acts a cap for the system of boxes wrapping over all of the edges. To resist rain and the elements, we wrapped the outer cover in metal flashing. This cover, as well as all of the other elements of the hive are removable so that we can check on the health and well-being of the bees over time. 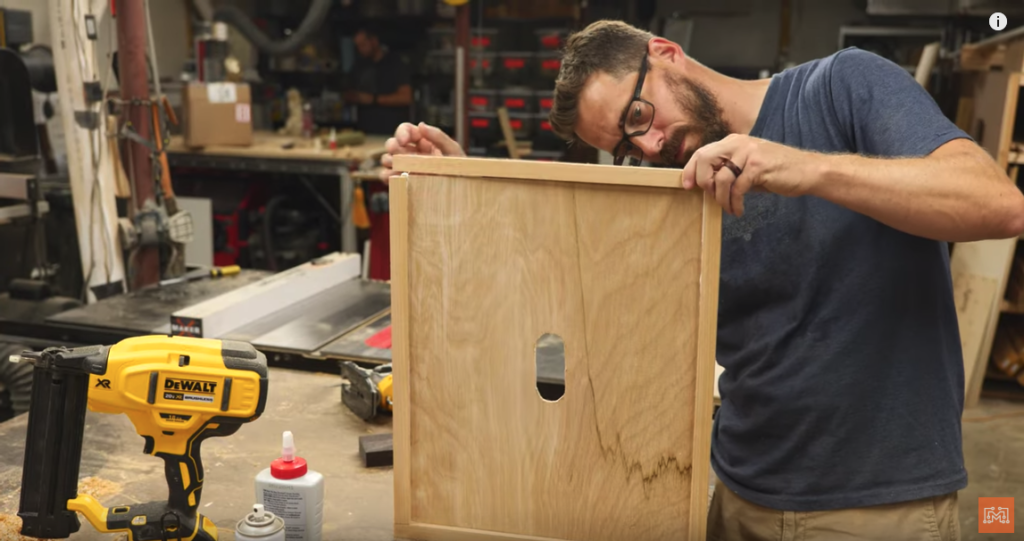 Now that the hive was ready for its new tenants, we called Richie and he came over with his bee smoker to help us move the bee colony. I removed the interior wall panel from our back porch, exposing the bees and we saw 4 small honeycombs with a cringing number of bees crawling on them. He confidently cut the combs away from the house and transferred them to our frames using the fishing lines and rubber bands to help secure them. He ensured me that the bees would chew through the rubber bands when the combs became attached to the frames.

Once we moved the combs into the larger brood boxes, I filled in the hole in the wall with some silicone so that the worker bees wouldn’t return home and try to go back in the wall. To entice the worker bees to move into their new home at the end of the work day, Richie rubbed some lemon grass oil on the landing pad to match the bees pheromones. He ensured me that the workers would eventually move into the boxes with the queen and the rest of the hive after a few days. It took about 5 days, but they all made it in and stopped returning to the porch. We are slowly moving the hive away from the house and out into an open field where the hive will live. 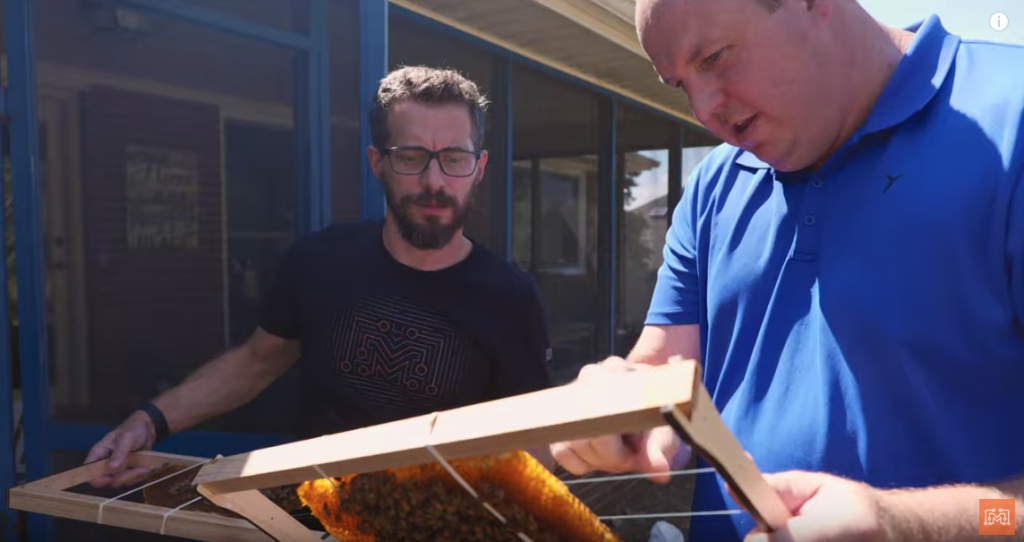 It’s been two weeks since the hive was moved out of the porch walls, and they seem to be thriving in their new home. I’ve had to fend off ants by sprinkling cinnamon around the hive, and have been adding sugar water to their feeder every other day. I have opened the hive a few times and can see where the bess have chewed through some of the rubber bands. The combs are getting bigger and they have a lot of new eggs inside them.

While there isn’t any honey in them yet, I want to create the best possible conditions for the bees so that we can have a sustainable relationship for the future. This project has been fascinating and a pleasure to work on. Thank you to Richie and our local beekeepers society for all of their knowledge and support. Thank you to Google Images for helping us find inspiration for the beehive and for sponsoring this video. 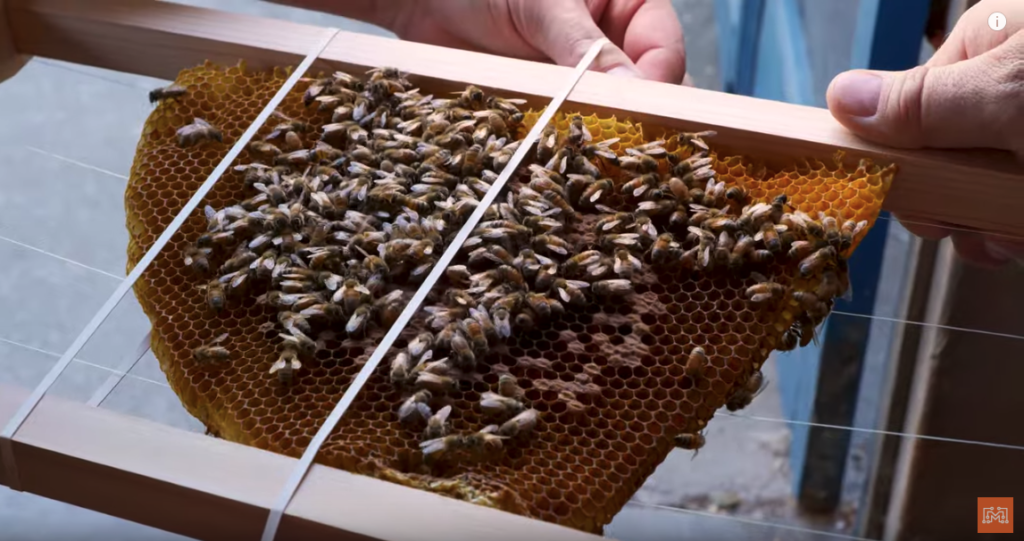