Hiding a Wall Safe with a Puzzle

Can we make a wall safe more secure by covering it with a puzzle? Come see how we did it and see if it actually deters a robber.

This project is meant to be silly. Josh and I were discussing wall safes and covering them with fancy paintings. I thought that it was pretty played out and simply covering the safe isn’t that clever. That turned into a brainstorming session on how to make it happen. First thing was to go to Harbor Freight and get an inexpensive safe that mounts between the wall studs. To mount it, you use a stud finder to location the wooden wall studs and cut a hole in the drywall. From the inside of the wall safe, you use mounting hardware to secure it between the studs. This is the easy part of this project. Now we need to make a clever way to find it that can also add a layer of security. 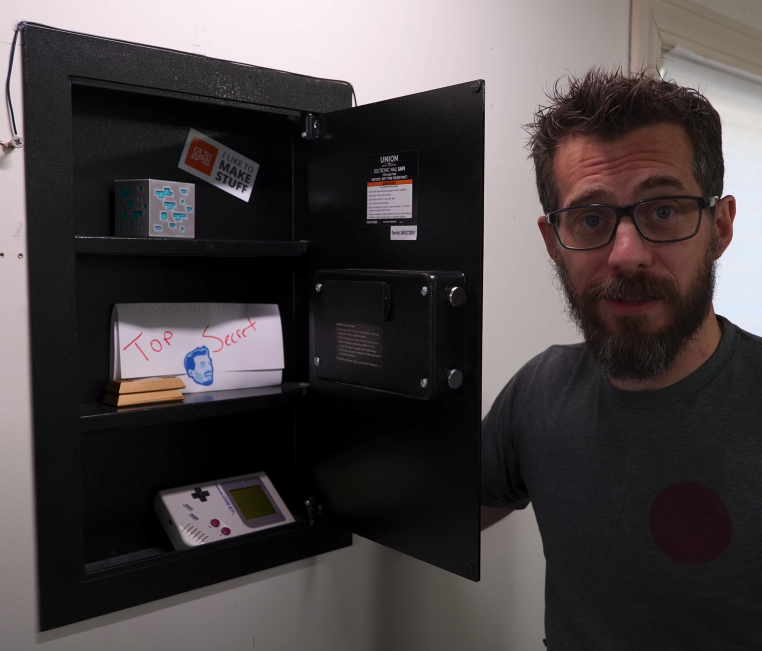 We covered building picture frames in the past, but this one is significantly more simple. I didn’t use fancy hardwoods or lap joints, I cut down a 2×4 to cover the front of the safe. I chose a 2×4 because it was thick enough to hold the painting as well as some electronics embedded in the back. Using a trick from my friend David at Make Something, I added some support pieces behind the mitered corners for added strength. the beefy frame was ready to accept a painting, so Forby made up a beautiful piece of artwork just for this occasion. 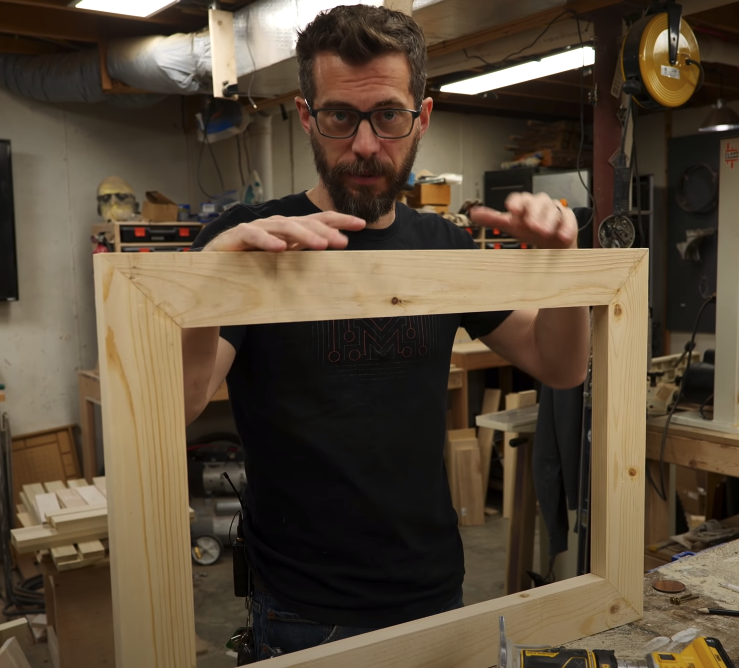 The idea behind this puzzle is that you have to remove the painting from the wall in a specific way. To do this, the screws that hold the painting ride in a specially designed track. The painting only comes off the wall if you successfully navigate the puzzle path. Josh 3d printed the puzzle that I mounted on the back of the picture frame. You could easily stop here and the painting would deter a modest thief. Instead, we decided to add electronics that would trigger a screeching alarm when you mess up the puzzle sequence. To do this, I routed a pocket in the back of the frame. This pocket held a 9v battery, three sirens, and the wiring. 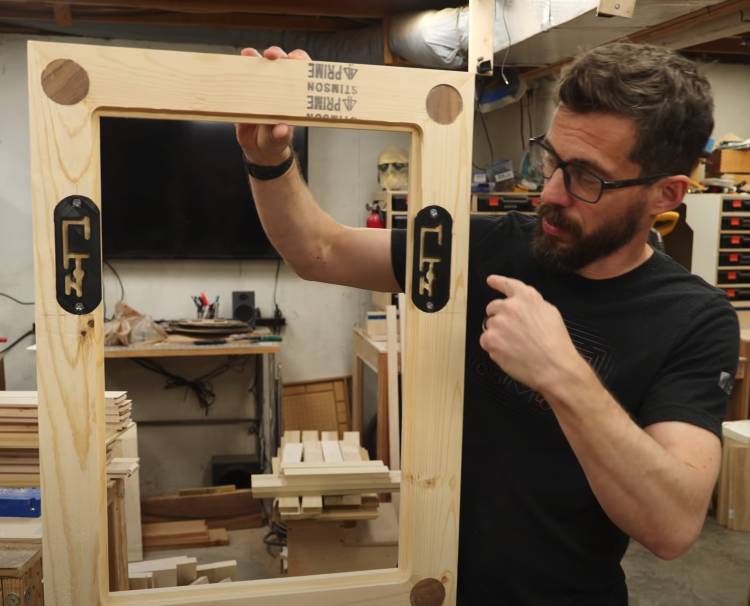 The wires from the positive side of the battery went to the puzzle on the right and the negative on the left. The puzzles were covered in conductive aluminum tape so the power could connect. To complete the circuit, I had to install a ground wire on the wall connecting the two screws. Now, when you take a wrong turn in the puzzle, the screws touch the conductive tape, close the loop, and activate the screeching alarms. Don’t add a bug zapper relay to this setup, it hurts, and you can get really hurt, we tried. Once it was all setup and installed, I had Josh try to break into the safe (he hadn’t heard the alarms yet). It was very loud and very annoying, but he eventually got it after a lot of time. The safe actually resets after 3 unsuccessful attempts, which made the process take even longer. The homeowner would totally hear the ear-piercing alarm and have plenty of time to call the authorities. 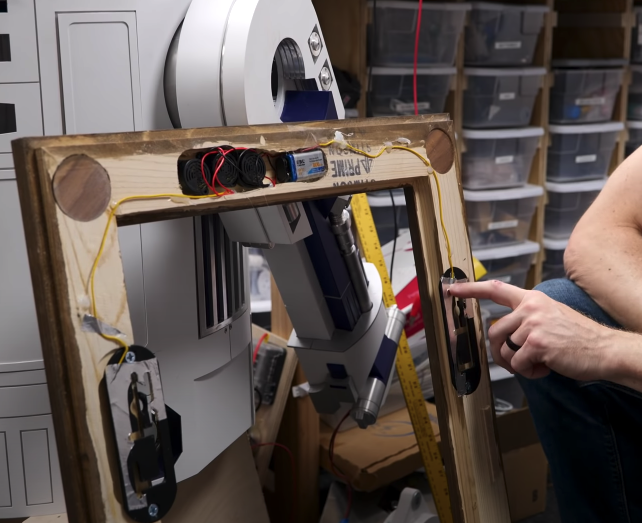 Couldn’t Not Make It

This was one of those projects that was too fun and silly not to make. It spurred from a conversation between friends that escalates into a cool idea. Yes, wall safe already exist; yes, people cover them with fancy paintings; but who adds a screeching puzzle? It’s the right mixture of silly and practical and that’s where we love to operate. If this gave you an idea for a silly yet practical project, reach out to us on social media @iliketomakestuff and tell us about it! 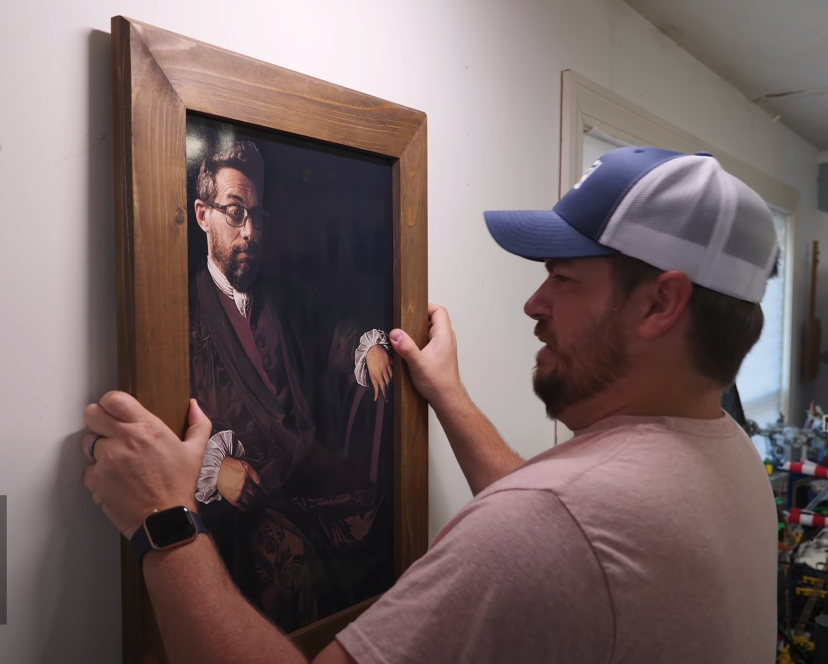