By Josh PriceMarch 11, 2021Projects
No Comments

In this second installment of the DIY Guitar Build, Bob and Josh finish up their guitar and bass! This challenge has been so fun and the guys love their new instruments. Follow along as they finish up the builds and play a song with them!

At this point in the build, Bob has the front and back of his hollow-body guitar completed and ready to glue together. Josh has the neck and fretboard joined together and his backup body completed. First, Bob has to route out the correct sized pocket for his after-market Fender Stratocaster neck he purchased from www.stewmac.com. For this build, he chose to build the body and purchase the completed neck. On the other hand, Josh now has to add the frets to his bass neck by hand. This process involves hammering them into the thin slots, flush cutting them against the side of the neck, and leveling them across the length of the neck.

Bob joined the two halves of his semi-hollow body guitar together and sanded the whole thing smooth. After Josh finished filing and sanding the frets, his custom neck was completed. At this point, both guys decided to make neck shims. A neck shim is a thin piece of tapered wood that is placed in the neck cavity under the neck. Once the neck is screwed to the body, the tapered shim pushed the neck into a slight angle which helps with playability later. Now that Bob and Josh are happy with the neck fit and the shim placement, they removed their guitar necks and applied finish to their instruments. Once dried, the necks were reinstalled. Next, it is time to add the ever-important electronics. 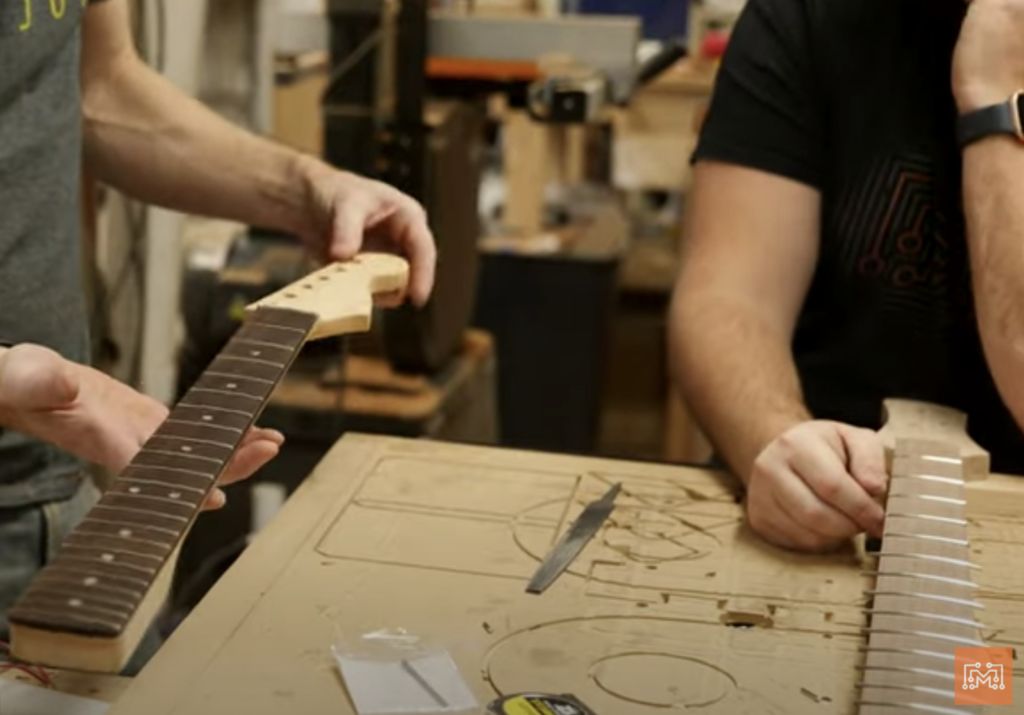 These guitars are electric, not acoustic. That means that they need pickups to register the string vibrations and send those signals out to an amplifier. There are tons of different pickup types for both guitars and basses. The guys have been playing guitar for a long time and have their own personal tone preferences. Bob purchased an electronics kit that is meant for a Gibson Les Paul. Josh chose a double humbucker set with an active pre-amp system to give him more control of this tone output.

Josh wired all of this electronics components into a 3d printed cup before installing them into the back of the bass. Bob installed his electronics through the access door in the back of his guitar and mount the potentiometers and knobs on either side of the sound holes. Each pick up set up is unique and requires a specific wiring diagram. While it may look complicated, all it takes is a basic knowledge of soldering to get the job done. 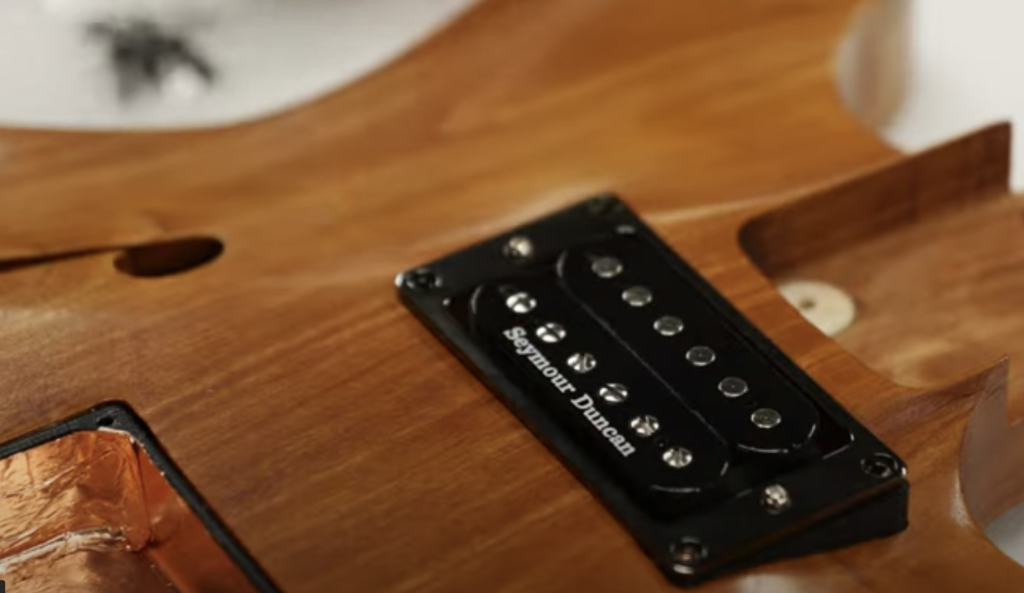 Besides electronics, there are some crucial components that are necessary to make a guitar function. One such component is called a bridge. The bridge is where the strings terminate on the body. Its placement is determined by the guitar’s/bass’s scale. In guitars, there are mechanisms called tremeloes that combine the function of a bridge with a spring-action bar that lowers the guitar’s tone when pressed. Bob is partial to the Bigsby tremelo, so he installed one on his DIY guitar. Josh had to look for a bridge that would accommodate a 5-string setup as opposed to the standard 4-string arrangement. The guys also added some strap nuts to the body so they could attach their leather guitar straps.

At this point, Bob was ready to string  up his DIY guitar and start playing. Josh, on the other hand, had a few more steps to accomplish. He had to install the tuning machines to the headstock and laser cut a walnut pick guard to add a cool element to the body. Both guys had strings installed, necks properly tensioned, and, thanks to the neck shims, proper action height achieved. It was time to rock out! 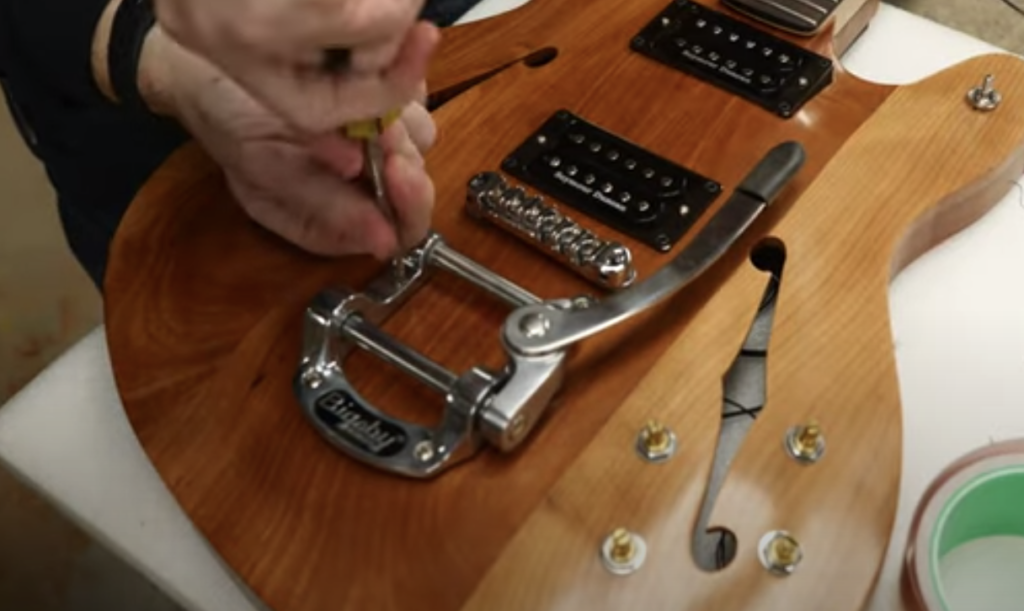 Get The Band Together!

The guys are so happy with their DIY guitars! Bob is impressed that he was finally able to tackle the challenge of making his own guitar and he loves playing it! While Josh might not be thrilled with this off-centered stripe job, he is proud that he was able to make all of the necessary components for the bass himself. The guys faced all sorts of challenges during this DIY guitar build, but they are better off for it. Josh increased his 3d modeling skills in Fusion 360 and CNC milling, while Bob became much more confident in his ability to use the router and other hand tools.

No matter the result, there are always benefits to stepping out of your comfort zone and tackling a challenge. Now it’s time to go rock out! There is a breakdown video on the second channel where the guys go into more detail about their individual instruments if you’re interested. 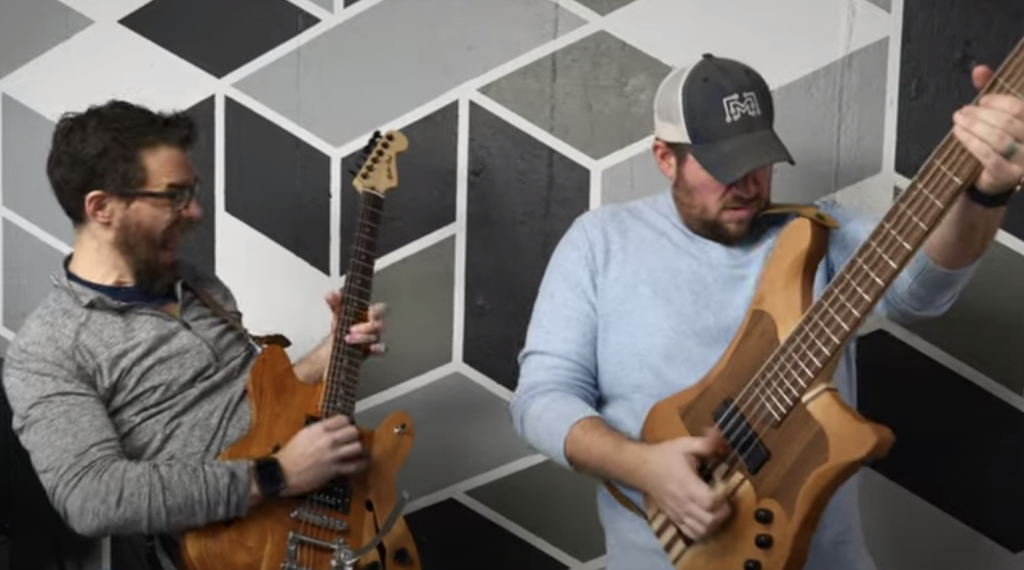