By Josh PriceMarch 4, 2021Projects
No Comments

Josh and Bob are going head to head again in a DIY guitar build-off! In part 1 of this 2-part series, Bob and Josh are building guitars. Bob is making a semi-hollow body guitar and Josh is making a 5-string bass. Come follow along and see who makes your favorite!

1. Body Only or Whole Guitars

DIY guitar making is really fun for any music lover. It combines woodworking, electronics work, and a love for playing guitars. It can be a great alternative to purchasing an expensive guitar or it can offer a level of customization that most people couldn’t afford. The guys are building two different types of guitars; a semi-hollow body guitar and a 5-string bass. This is the first time that Bob has attempted a guitar build, while Josh has already made a body-only custom bass.

Bob will be recreating one of his coveted guitars, the Fender Starcaster. It is a semi-hollow body which means that there are carved pockets on the inside to give the guitar a more dynamic and bassier sound. He will be purchasing an aftermarket Fender neck and bolting it onto his hand-tool carved body. Josh is choosing to go outside of his comfort zone is making the entire bass from scratch. He has designed the body, neck, and fretboard in Fusion 360 and will primarily be using the CNC to create those elements. There are great companies like StewMac.com (who sponsored part of this project) that sell guitar and bass kits if making your own parts is too daunting. 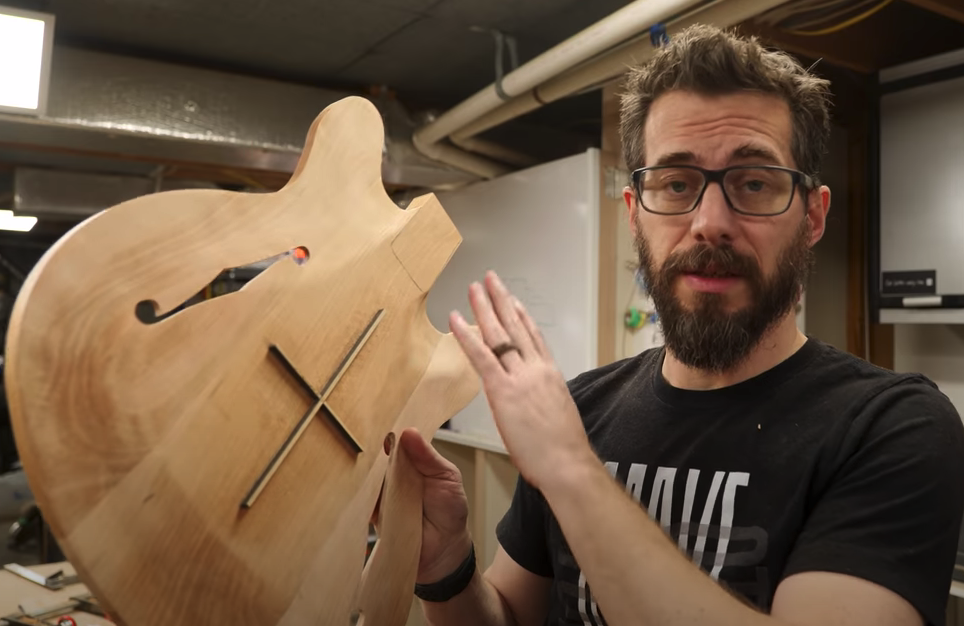 As mentioned earlier, Bob will be using routers, files, and manual tools to create his guitar body while Josh mostly uses the CNC. If you are wanting to build your own guitar, this decision point may come up. After using each, the guys have some opinions to help you decided which path to choose. First, Bob went online and found a straight-on photo of the Starcaster that he brought into Adobe Illustrator and traced.

Furthermore, because this guitar has an arched-top, he had to make several offset outlines that acted like contour lines to map out the curves. Bob then exported those shapes to the laser cutter (you can also print out those templates and cut them out by hand). He decided to add a slot in the templates that could accept keys that he glued to the wooden blanks. This way, the templates all had the same center line. He used a straight bit on the router with a patterning bearing and cut the area outside of each template. This creates a rough stair-step look that was smoothed out using the Turboplane on an angle grinder. 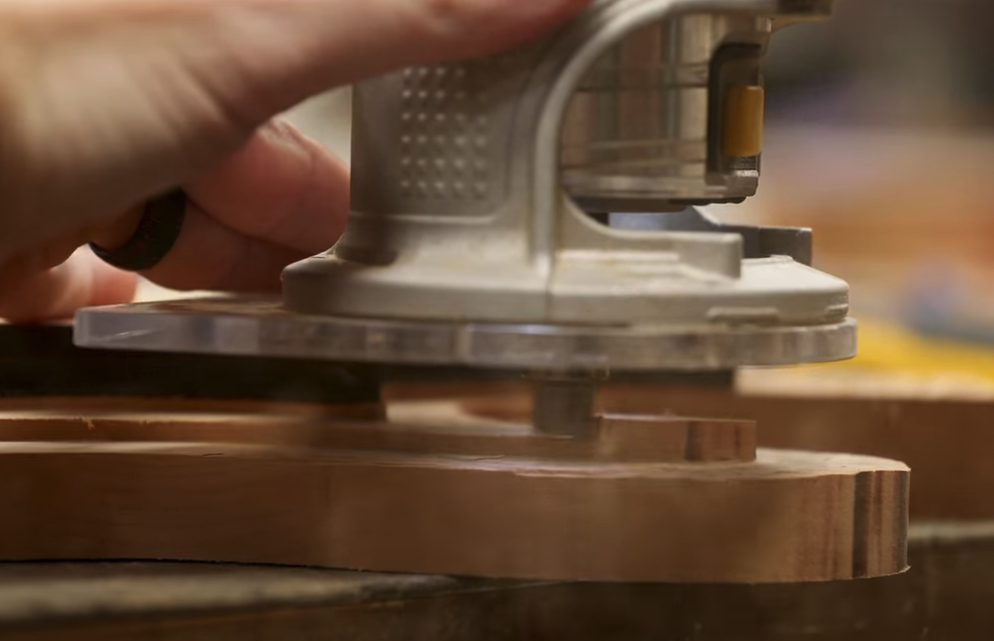 Josh went a different way and modeled his bass completely using 3d CAD software, Fusion 360. He had to do a lot of research on scale, fret spacing, pickup placement, truss rod positioning, and string alignment before he settled on a final design. Once he was happy with his design, he easily created CNC cutpaths and exported those to the AVID CNC. Josh glued up a few body and neck blanks just incase the CNC job messed up and he had to start over. The CNC executed his design just as expected, but the nerve-wracking process was tense and slower than he thought. Josh ran into some issues carving the neck because he didn’t properly think through the order of operations when performing a two-sided carve. While these mental challenges were daunting on him, his parts came out just as he expected. 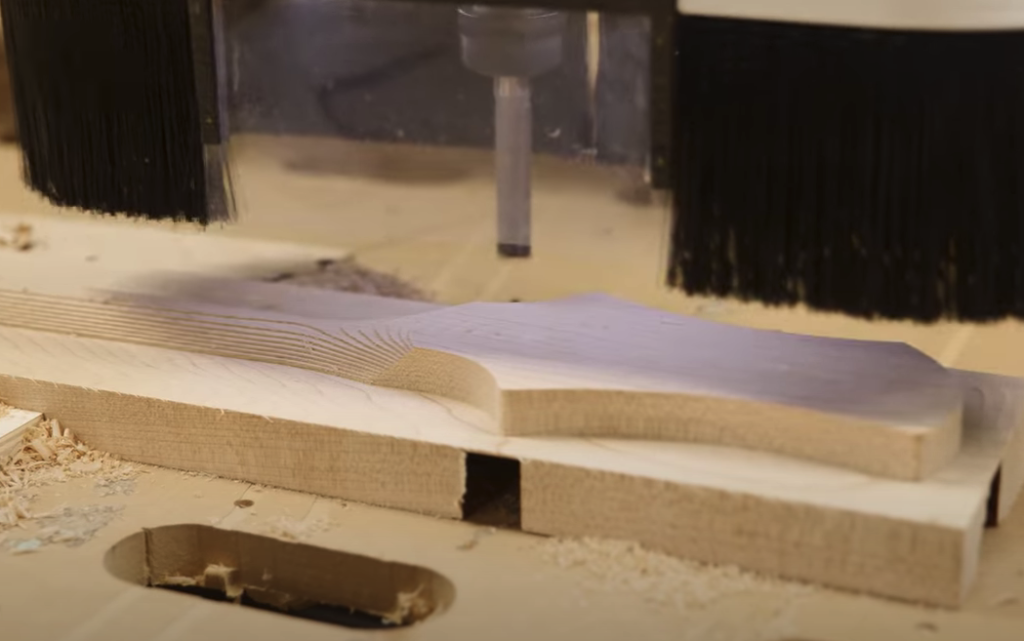 Going into this project, the guys knew that there was the very likely chance that they would mess up their DIY guitar. Bob and Josh used their recently purchased stockpile of cherry wood to glue up backup body and neck blanks before they started. The guys managed their expectations that their initial pieces may not end up their final pieces. Having back-up wood prepared was a calming reassurance that allowed the guys to make educated decisions when problems arose.

Bob accidentally, incorrectly positioned the sound hole template on his hand-carved body, making the whole piece look very wrong. Josh discovered a deep-routed problem with his cutpaths that caused his CNC’d body to be misaligned and the neck pocket ruined. While frustrating, the guys were able to fall back on their insurance blanks to start the process over again. Admittedly, it was more of a labor-intensive process for Bob to recover from his mistake because of his manual processes. Josh was able to find the cutpath issue, fix it and recut the body on the CNC. That digital process allowed him to perfectly recreate his design multiple times. 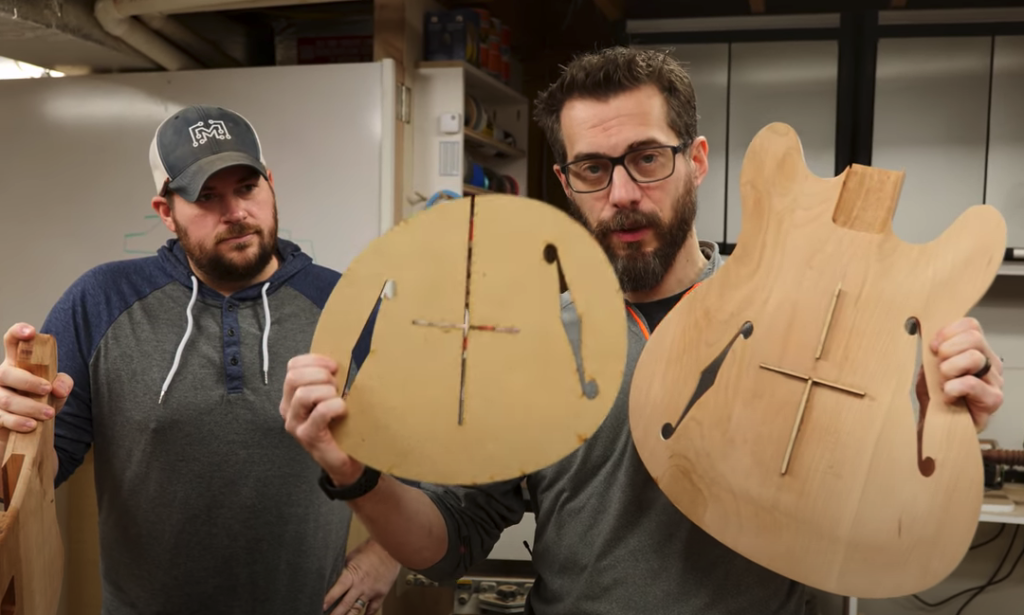 So Excited to Put It All Together!

In conclusion, this is only the first part in this two-part build off. Next week, the guys assemble their components, add electronics, strings, and finishing touches. While there were hiccups along the way, they are both super happy and proud of their guitar parts. They can’t wait to share the final results with you next week, and even play a song with them! If this video inspired you to make a DIY guitar, there are a lot of resources for you to check out. Again, check out Stewmac.com to get kits, parts, tools, and measurements for your guitar build!