Dice towers are fun projects for the role-playing gamer in your life. You can make them out of anything, come see how to make your own!

There are infinite ways to make a dice tower. It is a small structure made to tumble a dice so they roll evenly and without bias from the player. This vague concept allows for A LOT of creative freedom to enhance your table top game playing experience. The tower I designed was meant to roll the dice using an array of light. Obviously, light has no actionable mass, so it alone can’t have an affect on the dice. Using some clear acrylic, I solvent welded a rectangular tower together using a special acrylic cement.

To create the dice tower’s tumbling action, I added some ramps inside the structure, which all sat atop a matrix of LEDs. I attached an acrylic hinge to the top ramp which would actuate a microswitch. This microswitch sends a signal to an Arduino in the base, activating the light display. The acrylic captures the light from the bottom and makes a very cool, animated tower of light that rolls my dice. Let’s see what the rest of the ILTMS team came up with. 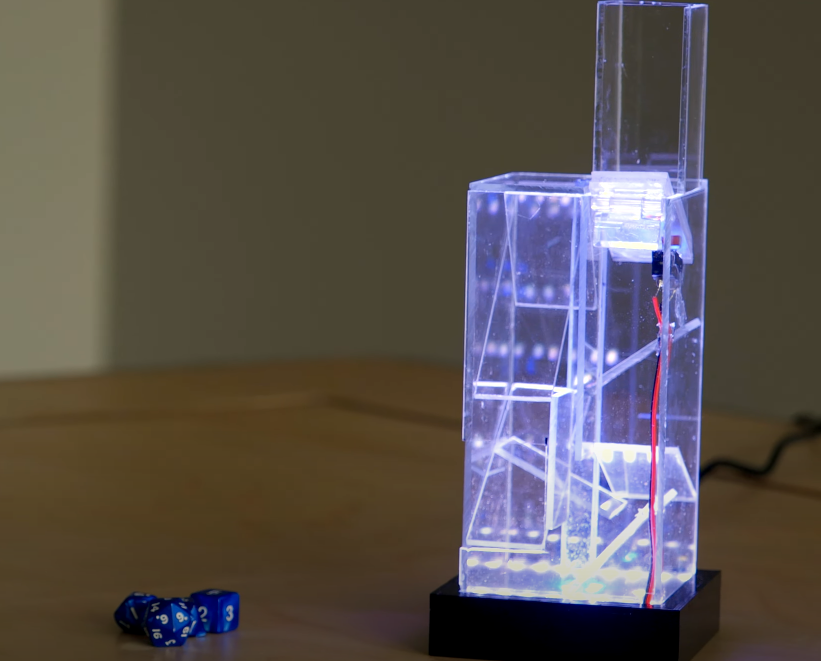 Anthony loves Nintendo game, Super Mario to be more specific. He wanted to take the pipes from the game and make them roll his dice. He modeled the concept in Fusion 360, our 3d modeling program of choice. Using some simple cylinder shapes and fun elements from Mario Brothers, he sent the model to our 3d printer and his dice tower materialized before our eyes. To bring it home, he used some bright pops of color and a custom 3d-looking paint job to make it match the game perfectly. He pours the dice in the top, it hits some printed tumblers, and spots them out another pipe onto a printed mat. It looked fantastic and his modeling skills have really improved. But what if you are so keen on 3d modeling yet? 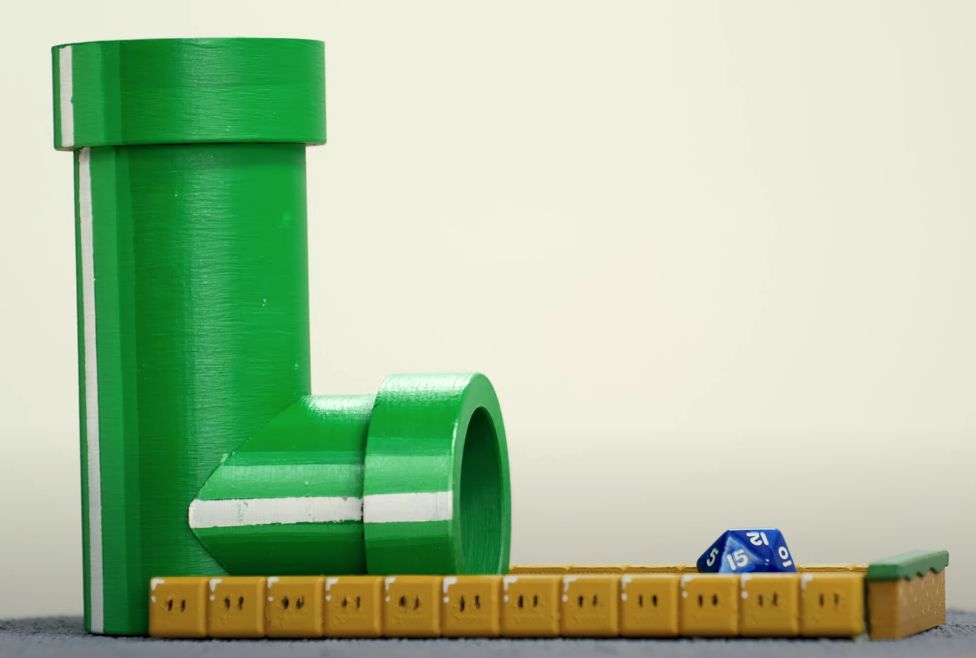 Meighan, our new Social Media Manager, isn’t so keen on 3d modeling yet, so she found a free 3d model online from a designer called Fates End. They have an entire catalogue of dice towers available for purchase, but she chose the free one that looked like Rapunzel’s tower. After printing it out on our 3d printer (they are so awesome), she painstakingly primed, painted, weathered, and added fake moss to the tower. To sell the Rapunzel theme, she found some replacement doll hair at a craft store, braided it, and wrapped it around the dice tower. It was a true work of art that she is super proud of. Not only does her tower roll some sick dice, it looks like it came out of a fairy tale. If you don’t have a 3d printer, Josh has a silly option for you. 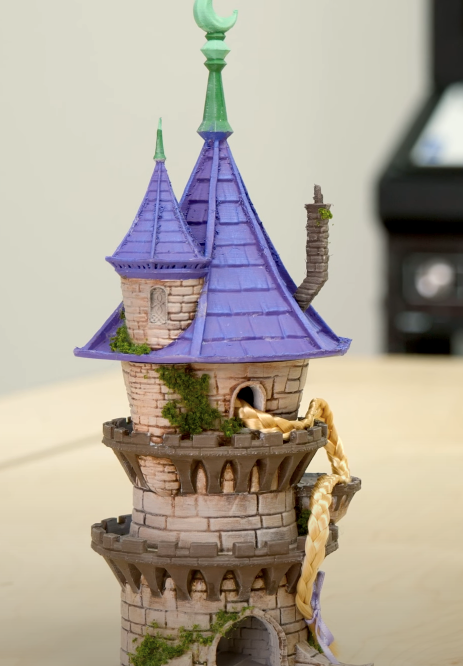 Josh decided to make his dice tower out of simple crafting supplies. He went to the craft store and found a sheet of hardy board, a pack of popsicle sticks, a sheet of fake leather paper, and some model paint. Since Josh is loves Monty Python and the Holy Grail, he wanted to make the iconic Trojan Rabbit from the movie. In the movie, the knights of the round table make a large Trojan Horse (but a rabbit) but forget to get inside for the surprise.

Josh found some reference photos online and cut the hardy board (MDF) with a boxcutter. After CA glueing the frame together, he spent the day breaking popsicle sticks and glueing them to the rabbit. For the iconic rabbit head, he again cut the MDF and layered on panels of the faux leather just like the movie version. After he added the floppy ears and a trap door to hold his dice, the Monty Python dice tower was completed! 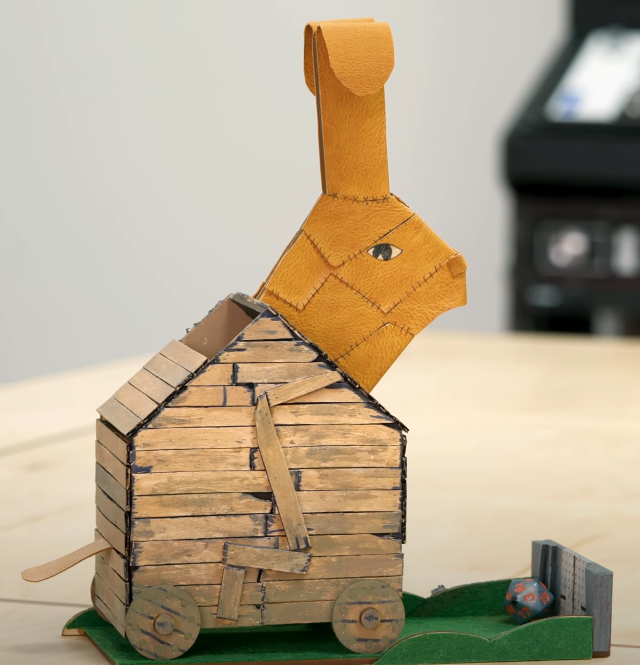 Make You Own Dice Towers!

These projects were really fun and allowed all of our personalities to shine. If you or your family like table top games or role playing games, I highly encourage you to make a dice tower. It serves a very limited function, so you can focus solely on the creative form. Josh also made a really nice looking walnut dice tray to house the dice and give them a simple rolling area. It doesn’t have to be super outlandish, but hey, this it the internet. Go try this project out for yourself and have some fun. All of our towers look awesome on our new Gaming Table that you should check out too! 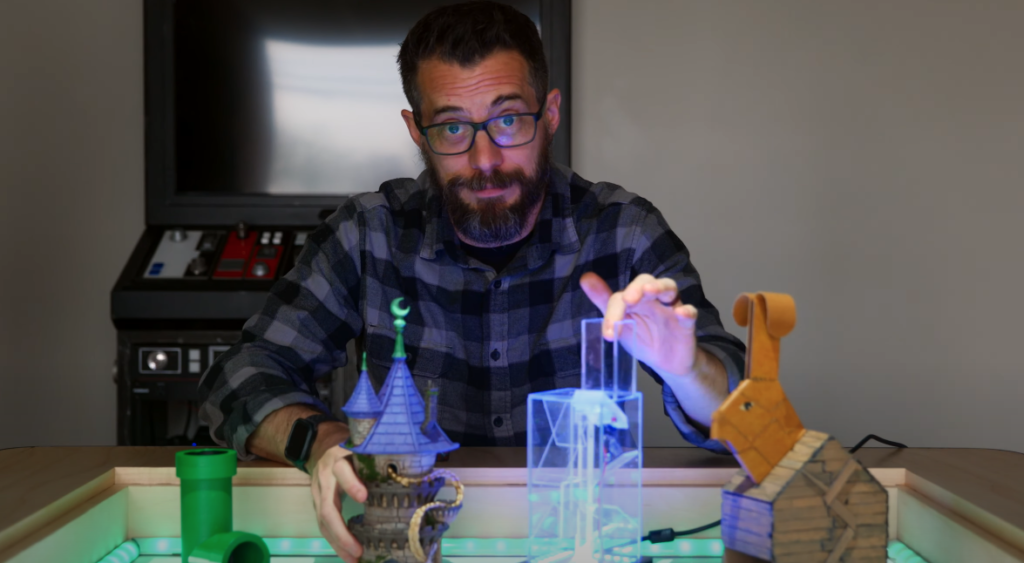